The 25,173 fans who came out to Monmouth Park on Sunday afternoon for the TVG.com Haskell Invitational (G1) to witness Maximum Security romp as the 4-5 favorite also enjoyed 5 stakes races on the undercard. Due to the extreme heat and sunny skies with the daytime high of 97 (heat index 111), after the first 2 races on the card were run as scheduled starting at noon, track management cancelled the balance of the non-stakes races and ran the stakes races back-to-back starting at 6pm. With the scorching hot dry conditions the main track was rated fast and the turf was firm. 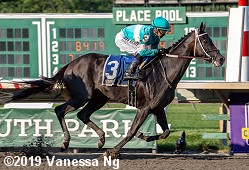 The $150,000 Molly Pitcher Stakes (G3) featured a field of 5 older fillies and mares going 1 1/16 miles on the main track. Apple Blossom (G1) and Ogden Phipps (G1) winner Midnight Bisou was the 1-20 favorite over 13-2 Coach Rocks, an allowance winner last out, and 13-1 Cosmic Burst, 3rd in an allowance and winless since the Zia Park Oaks in November.

Coach Rocks was quickest away through fractions of 24.79, 49.06, and 1:13.40 while pressed by Cosmic Burst and stalked by Midnight Bisou. Coach Rocks continued to lead through 1 mile in 1:37.39, but Midnight Bisou and jockey Mike Smith closed late to win by a length in 1:43.55. It was another 5 1/4 lengths back to Cosmic Burst third. 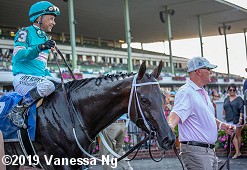 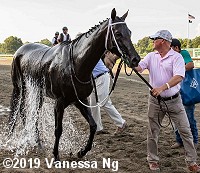 Left: Midnight Bisou in the winner's circle. Winning trainer Steve Asmussen said, "Her race today was beautiful. The hard part was us showing patience. We were very anxious. She's a very special filly and you want everything to go well. But she was great in the post parade, beautiful in the gate, and she traveled very well under Mike the whole way and finished very well. Pure professionals overcome obstacles. She's better equipped to handle them than the people."

Right: Midnight Bisou gets cooled off after the race. Winning jockey Mike Smith said, "She was a little aggressive early on and that's probably because of the slow pace. I thought about pulling out from in behind early but I didn't want her to take off early. There was still plenty of race to go so I decided to wait. When I saw my opening she really responded." 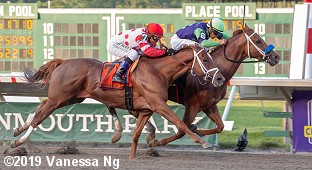 Jockey John Velazquez sent Coal Front to the lead first time by through fractions of 23.58, 47.32, and 1:10.81 while pressed by War Story and stalked by Bal Harbour. Entering the stretch Bal Harbour gained the lead through 1 mile in 1:35.35, but War Story and jockey Luis Saez fought back to win by a head in 1:47.65. It was a long 12 lengths back to Coal Front third. 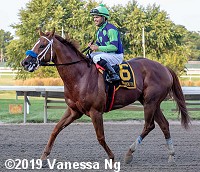 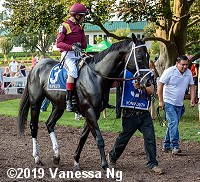 Left: War Story returns after the race. Winning trainer Jorge Navarro said, "The name says what he is. What a warrior. He's the only one from American Pharoah's class of 2015 that's still going. It's amazing to have a horse like this still going around. You don't see that anymore. It wasn't an easy race. Not at all. We had home court advantage. He likes this track. What a big race he ran. He's got a ton of heart and a ton ability, still at his age. He wants to do it. He's a happy animal."

Right: Third place finisher and beaten favorite Coal Front in the paddock. the Todd Pletcher trainee improved his record to 7 wins, 0 seconds, and 1 third in 11 starts, earning $1,725,280 for owners Robert LaPenta and Head of Plains Partners. 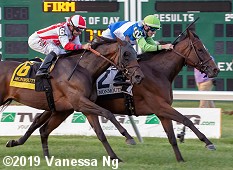 Run immediately before the Haskell, the $150,000 WinStar Matchmaker Stakes (G3) featured a field of just 3 older fillies and mares (after 4 scratches) going 1 1/8 miles on the turf. New York (G2) runner-up Competitionofideas was the 2-5 favorite over 2-1 I'm So Fancy, winner of the Big Dreyfus Stakes, and 4-1 Touriga, winner of the Carlos Gilberto e Carlos Telles da Rocha Faria (G2) in Brazil. 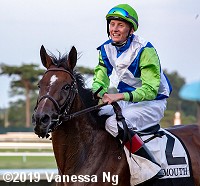 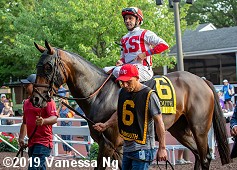 Left: I'm So Fancy returns after the race. The Arnaud Delacour trainee improved her record to 6 wins, 3 seconds, and 3 thirds in 23 starts, earning $380,364 for owner Lael Stables.

Right: Second place finisher and beaten favorite Competitionofideas in the paddock. The Chad Brown trainee improved her record to 3 wins, 4 seconds, and 2 thirds in 10 starts, earning $505,568 for owner Klaravich Stables. 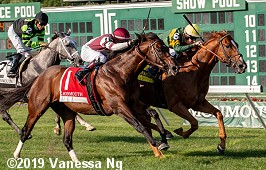 Kicking off the Saturday stakes sextet was the $150,000 Oceanport Stakes (G3) for older horses going 1 1/16 miles on the turf. Prince George's County Stakes runner-up Divisidero was sent off as the 7-10 favorite in the field of 4 over 8-5 Just Howard, 3rd in the Dixie (G2), 5-1 Bird's Eye View, 2nd in allowance company, and 9-1 Dover Cliffs off an allowance win. 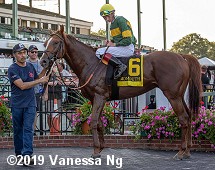 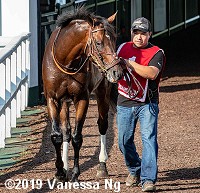 Left: Just Howard in the winner's circle. Winning jockey Trevor McCarthy said, "The plan was to stalk today and once those two went on I was able to find a good spot and save ground. And when I heard Divisidero start to make his move I came out and we were just able to outkick him. He's been keeping good company and going against tough horses especially in the Dixie. So we're really happy to get this win."

Right: Second place finisher and beaten favorite Divisidero in the paddock before the race. The Kelly Rubley trainee improved his record to 6 wins, 6 seconds, and 4 thirds in 27 starts, earning $1,514,539 for owners Gunpowder Farms and Brereton Jones. 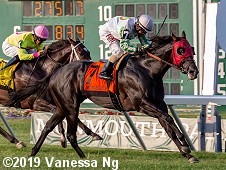 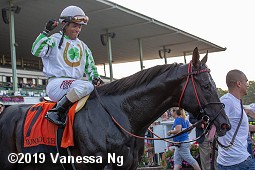 Winning trainer Tom Clark said, "He's just an amazing horse. It's just a great feeling. It's his second race back and they move up from that. He had some time off from a foot issue, but he's come back great. It's hot but I've raced in hotter. They all have to run in it too so it's a level playing field."

On to the 2019 Haskell results and photos