The 131,256 in attendance at Pimlico for the Preakness Stakes (G1) were treated to a marathon 14-race card with the first race off at 10:30am. Conditions were excellent, with mostly cloudy skies and temperatures in the low 80's, the main track rated fast and the turf course updated to firm after drying further from "good" on Friday. 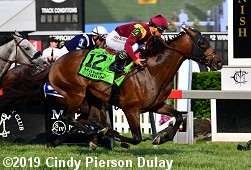 A field of just 10 older horses went 1 1/16 miles on turf in the $250,000 Maker's Mark Dixie Stakes (G2). Last year's Travers Stakes (G1) winner Catholic Boy was sent off as the 7-5 favorite, unraced since 13th in the Breeders' Cup Classic (G1). In to challenge him inclued 7-2 second choice Inspector Lynley, winner of the Danger's Hour Stakes, and 5-1 third choice Admission Office, an allowance winner at Keeneland last out.

Jockey John Velazquez sent 15-2 Real Story to the lead first time by through fractions of 23.46, 47.71, and 1:11.25 while pressed by Catholic Boy and stalked by 43-1 Paret. Turning for home, jockey Javier Castellano moved Catholic Boy 3 wide to sweep to the lead through 1 mile in 1:35.01. Kept to task by Castellano, Catholic Boy held off late-running Admission Office by 1/2 a length in 1:41.09. It was a neck back to 12-1 Just Howard third.
Full results chart from DRF 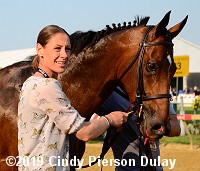 Left: Catholic Boy in the winner's circle. Winning trainer Jonathan Thomas said, "I was thinking [in the stretch] he might need a better trainer. No, but he's just such a gifted horse. I would have been happy coming here and running a good second or third and galloping out well. But he has it in him to win. It was great to see. We thought this race was a good launch pad for the bigger races going into the remainder of the year. Sometimes Turf is a little easier on them coming back and that was the plan we utilized. I think the Suburban at Belmont might be a race now under strong consideration."

Right: Catholic Boy heads back to the barn. Winning jockey Javier Castellano said, "He's a super horse. He can be on the pace, he can come from behind. I like the way he did it. Coming off a layoff since the Breeders' Cup, that's a long time to put in a good race like he did today. It was a great performance. We've been working together with Jonathan and he did an excellent job with the horse to bring him to perform the way he did. He can go any distance - a mile and a sixteenth, a mile and a quarter. On the dirt or turf. He's a super horse. We don't see to many horses like that, Grade 1 on the turf and the dirt." 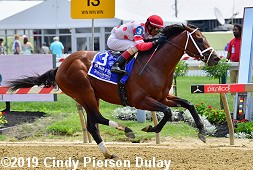 King for a Day in the winner's circle. Winning trainer Todd Pletcher said, "He got a little behind schedule to make any of the Triple Crown races, but the owners are very patient, just wanted to give him every chance to meet his expectations. So we gave him a bit of a break this winter. He's come back, he's trained well. We were actually looking at an allowance race. It didn't go, so this turned out to be a good spot. He always looked like he was in a comfortable rhythm. That was the main thing. We didn't care if we were on the lead, or where we were laying as much as just getting in a comfortable rhythm." 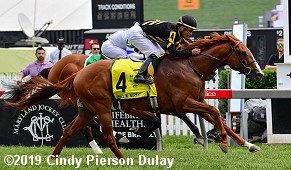 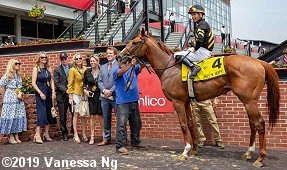 English Bee in the winner's circle. Winning trainer Graham Motion said, "I think he was really unlucky in his last race at Tampa. He kind of got stopped coming off the turn right when he went to make his move. We all decided to wait for this race. He's a real pro. He hasn't done anything wrong. Glad to start off with a win. I haven't looked much beyond this race but I think distance won't be a problem." 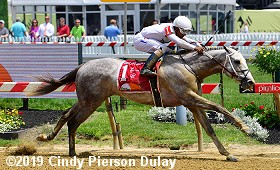 The $150,000 Maryland Sprint Stakes (G3) featured a field of 6 older horses sprinting 6 furlongs on the main track. Allowance winner Wentz was sent off as the 2-1 favorite over 9-4 second choice New York Central, 5th in the Commonwealth (G3) at Keeneland, and 5-2 third choice Lewisfield, 2nd in the Frank Whiteley Jr. Stakes. Jockey Arlando Bocachia sent Lewisfield to the lead exiting the chute through fractions of 22.65 and 44.84 while pressed by Wentz and stalked by 3-1 fourth choice Proforma. Lewisfield continued to lead to midstretch through 5f in 56.67 but New York Central, 4th early under Ricardo Santana Jr. came through on the inside to win by 1 3/4 lengths over Proforma in 1:08.74. It was another 1/2 length back to Lewisfield third, and 3 more to favorite Went fourth.
Full results chart from DRF

New York Central in the winner's circle. Winning jockey Ricardo Santana Jr. said, "We got a clean break. That's what we were worried about, because sometimes he doesn't break. He broke pretty good today, and I just had patience that the rail would open. I know my horse. He's a fighter and he'll go through. As soon as I asked him, he went on through. I had plenty of horse at the three-eighths. I just wanted to have plenty of patience to make the right move. I didn't want to move too early. This is a long stretch. I just had to have a little patience, and thanks God we took the win." 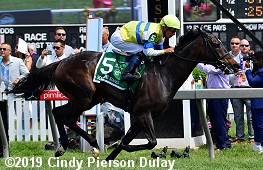 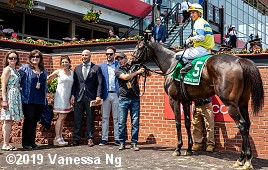 Ickymasho in the winner's circle. Winning owner Joe Miller said, "After she won the Bewitched (at Keeneland), we were planning on waiting and running her at Woodbine. She was doing so well, though; she was acting like she wanted to run. Roger Attfield is a big believer in taking advantage of that. It was his call to run her here, and it was the right one. If all goes well, we'll look next to the Dance Smartly at Woodbine." 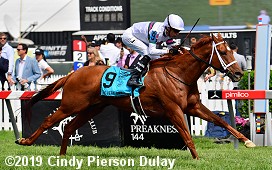 A field of 9 older fillies and mares sprinted 5 furlongs on turf in the $100,000 The Very One Stakes. Jockey John Velazquez sent 11-10 favorite Jo Jo Air to the lead through fractions of 22.88 and 45.62 while pressed by 11-2 third choice Wild About Star and stalked by 7-2 second choice Souper Echo. Jo Jo Air led to midstretch but jockey Daniel Centeno sent Wild About Star 3 wide to rally past her to win by 1 3/4 lengths in 56.93. It was another 3/4 length back to 13-2 fourth choice Misericordia third.
Full results chart from DRF 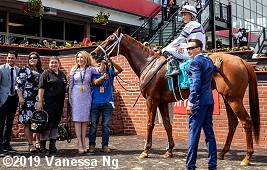 Wild About Star in the winner's circle. Winning owner-breeder Evelyn Benoit said, "Star Guitar is the Louisiana stallion of the year, and I own the mare and we have a lot of babies. This is what I've been trying to do, not only promote Louisiana racing but horse racing for everyone, to show that Louisiana and women and women in my position can do this. I never had a horse super enough to be a stallion. To win an open stakes here in this beautiful state of Maryland, it means everything to me. I'm so thrilled, couldn't be any happier if I won the Preakness. It was time to step out and see what we have against other people. She's out of his first crop. I've been wanting to have this opportunity in front of a big crowd to show that in Louisiana we can breed nice horses." 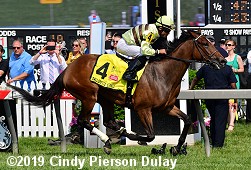 A field of 8 older fillies and mares contested the $150,000 Stella Artois Gallorette (G3) over 1 1/16 miles on the turf. Albert M. Stall Memorial winner Mitchell Road was sent off as the 2-1 favorite over 7-2 Inflexibility, 6th in the Athenia (G3) at Belmont, and 5-1 I'm So Fancy, 3rd in the Blandford (G2) last out at the Curragh. Jockey Joel Rosario sent Mitchell Road to the lead first time by through fractions of 23.28, 47.07, and 1:10.59 while pressed by 19-1 Dynatail and stalked by I'm So Fancy. Turning for home Mitchell Road opened up on the field through 1 mile in 1:34.94, and cruised to win by 2 1/4 lengths over late-running 6-1 fourth choice Thewayiam. It was another 2 lengths back to 15-2 Viva Vegas third.
Full results chart from DRF 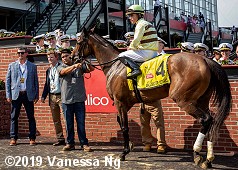 Mitchell Road in the winner's circle. Riley Mott, assistant to winning trainer Bill Mott said, "She's developed with age into a very nice filly. She showed talent from Day 1. She's never been out of the exacta and she's developed into a very nice filly. She got a little bit sick after her race at the Fair Grounds, and needed a little time to recuperate, which is why you're only seeing her now at Pimlico. She always trains very forwardly, very willingly and she surely ran well today. There's a big race at Belmont going one turn on Belmont Day (Just a Game) which I would say would suit her style, but obviously we have to see how she comes out of this and talk to the ownership. We'll enjoy this; she gave her little brother (Country House) a big update there." 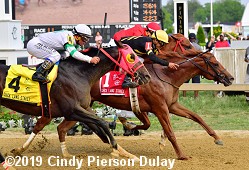 The $200,000 Chick Lang Stakes (G3) featured a field of 9 three-year-olds sprinting 6 furlongs on the main track. Preable, undefeated in 3 allowance starts, was sent off as the 8-5 favorite over 3-1 Malpais, winner of the Robert Hilton Memorial, and 7-2 Pyron, undefeated in 2 allowance starts. Malpais and 8-1 Gladiator King dueled for the lead down the back and around the turn through fractions of 22.65 and 44.82 while stalked by 17-1 Lexitonian and Pyron. Turning for home Gladiator King opened up a 1 1/2 length lead throuh 5f in 56.90 but Lexitonian and jockey Jose Ortiz came through between horses to win by a head in 1:09.74. It was another head back to 10-1 Admiral Lynch third, while favorite Preable trailed through and eased late to finish last.
Full results chart from DRF 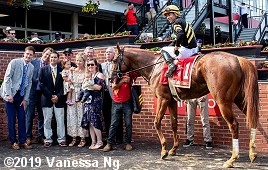 Lexitonian in the winner's circle. Winning jockey Jose Ortiz said, "He broke on top. I could have gone to the lead if I'd wanted to, but I figured there was going to be a lot of speed in the first half. So [trainer] Jack [Sisterson] told me if I could relax him and sit him back 'I would be the man.' And that's what I tried to do. He relaxed really well, because the pace was really fast. When I asked him to go, he was there for me the whole time. He didn't switch leads in the stretch, but he was digging in. He was trying, and that's all that matters."