The $1 million TVG.com Haskell Invitational Stakes (G1) is New Jersey's most prestigious race, featuring some of the top East Coast 3-year-olds going 1 1/8 miles over the main track at historic Monmouth Park in Oceanport, looking for automatic entry into the Breeders' Cup Classic (G1) under the Breeders' Cup Challenge Series "Win and You're In" promotion. Due to the extreme heat and sunny skies with the daytime high of 97 (heat index 111), after the first 2 races on the card were run as scheduled track management cancelled the balance of the non-stakes races and rescheduled the stakes races to run back-to-back starting at 6pm. This meant the Haskell went off at 8:12pm after the temperature had dropped down to 90 with the setting sun. As expected, Kentucky Derby (G1) first place finisher (but disqualified to 17th) Maximum Security was sent off as the 4-5 favorite in the field of 6 off his 2nd place finish in the Pegasus Stakes at Monmouth. In to challenge him included 11-4 second choice King for a Day, winner of the Sir Barton and the Pegasus, and 3-1 third choice Mucho Gusto, winner of the Affirmed (G3).

Jockey Luis Rodriguez Castro sent 42-1 longest shot Bethlehem Road to the lead first time by and he set fractions of 22.92 and 46.71 over thr fast track while pressed by King for a Day and stalked by Maximum Security. On the far turn, Bethlehem Road tired allowing King for a Day to inherit the front through 3/4 in 1:10.17 before having to check at the 1/4 pole and fading thereafter. Jockey Luis Saez, 3 wide aboard Maximum Security moved up to take over the lead through 1 mile in 1:34.96, and drew off late to win by 1 1/4 lengths over Mucho Gusto in 1:47.46. It was a long 8 lengths back to 34-1 Spun to Run third. There was a brief stewards' inquiry to investigate the incident on the far turn but the result stood. 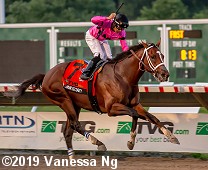 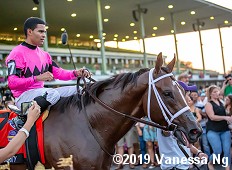 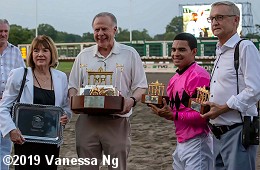 Left: Maximum Security in the winner's circle. Winning owner Gary West said, "The first time I saw (the video showing why the inquiry sign was posted), I thought there was no way they can take (Maximum Security) down. The other horse was going backwards in my opinion. He likes a good fight. The Travers is a special race and if you have two horses (Game Winner is the other) that have a chance to win it, I'd like to take two shots at it." Asked about possibly having the champion 3-year-old and Horse of the Year he added, 'Is there another 3-year-old with two Grade 1 wins and having finished first in a third Grade 1?"

Right: Owners Gary and Mary West, jockey Luis Saez, and trainer Jason Servis pose with the trophies. Servis said, "My horse has a lot of heart. He does not mind going head-to-head with any horse. I believe he doesn't need the lead. There were a couple of speed horses inside him. When I talked to Luis, we loved his post. The plan was to lay close. To break good and try to get a spot" 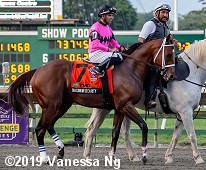 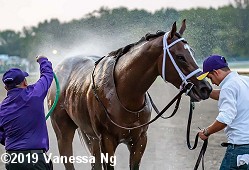 Left: Maximum Security gets cooled off after the race. Winning jockey Luis Saez said, "I knew there was going to be a lot of speed in the race. I didn't want to go to go to the lead and let everybody press me. I had the best post, I think. I just came out of the break from the gate and waited to see how fast they were going. When I saw that everybody wanted take the lead I just stayed right there. And when he came to the 1/2 he put me inside in a pretty nice spot, he was traveling good. We I saw (Mucho Gusto), he came outside me, he came close to me and tried to beat me. I just let my horse run and he kept battling with him." 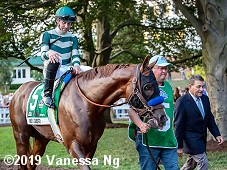 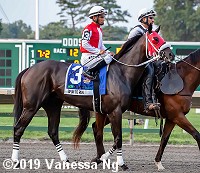 Left: Second place finisher Mucho Gusto in the paddock before the race. Jockey Joe Talamo said, "We had a perfect trip. Just really proud of my horse. I thought I had him at the quarter pole. It was a tough beat. But he gave it all and I was really proud of him.". Trainer Bob Baffert added, "I'm glad they didn't disqualify (Maximum Security). That would have been awful." 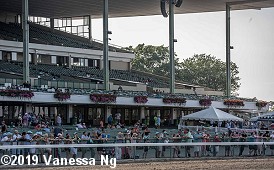 Most of the crowd had already gone home by the time the stakes races were run after 6pm.