The $750,000 Apple Blossom Handicap (G1) is the major race for older fillies and mares at Oaklawn Park, the final graded stakes of the meeting and closing out "Racing Festival of the South" weekend at the historic Hot Springs oval. An estimated 5,500 were on hand on Sunday afternoon for this 1 1/16 mile trip under partly cloudy skies and temperatures in the mid 60's after rain all day Saturday and overnight downgraded the track to "good". Breeders' Cup Distaff (G1) third place finisher Midnight Bisou was sent off as the 9-10 favorite in the field of 6 off wins in the Houston Ladies Classic (G3) and the Azeri (G2). In to challenge her included 6-5 second choice Elate, 2nd in the Azeri (G2), and 17-2 third choice Escape Clause, winner of the Harry Henson Handicap at Sam Houston.

Jockey David Cohen sent 10-1 fourth choice Wonder Gadot to a clear lead first time by and she set fractions of 23.07 and 47.08 while pressed by Escape Clause and stalked by 56-1 longest shot Viva Forever. On the far turn, Wonder Gadot tired allowing Escape Clause to inherit the lead through 3/4 in 1:12.12, as jockey Mike Smith moved Midnight Bisou, 5th early, out 3 wide to challenge for the lead. Escape Clause led to midstretch through 1 mile in 1:37.12 but Midnight Bisou rallied late to win by a nose in 1:43.88. It was another 2 3/4 lengths back to Elate third.

Also check out Omaha Beach winning the Arkansas Derby, Quip winning the Oaklawn Handicap, and Lady Apple winning the Fantasy Stakes during the Racing Festival of the South at Oaklawn. Note that this is no longer the closing weekend for the meeting, which will end on May 4 this year. 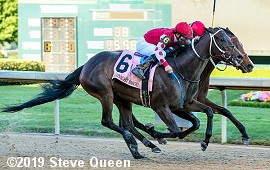 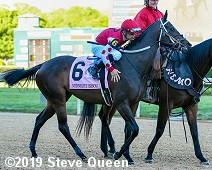 Left: Midnight Bisou in the winner's circle. Winning trainer Steve Asmussen said, "Obviously, I was very anxious. What an unbelievable filly. It was definitely worthy of a Grade 1. It was extremely competitive and hard fought every step of the way. We were talking about a special filly she is, how much confidence she has this year. She really seems to be enjoying her job. We're just blessed to have her. We'll discuss with Jeff Bloom and with the ownership group what we think is best for her (next start)."

Right: Midnight Bisou in the post parade. Winning jockey Mike Smith said, "Man that was great. Escape Clause ran huge, but you know, the great ones seem to pull it off no matter what. I'm really happy with the way she ran today, but she had to run. Sometimes you have to do that. I set back with Elate and waited to make my move. She ran huge, she had to fight for it, but she ran big. Escape clause ran really well." 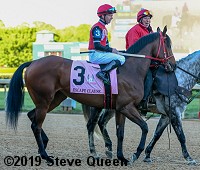 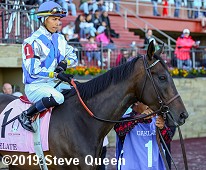 Left: Second place finisher Escape Clause in the post parade. Jockey Tyler Baze said, "She's really and truly probably one of the best horses I've ever been on in my life. She gives it her all. She got beat a nose and I got slammed pretty hard going into the first turn. I knew I got beat at the wire. It was a head-and-head battle all the way down the lane. She gave me everything." Trainer Don Schnell added, "I was slightly disappointed when the photo came up, but we said if we could run third in there, I'd be the happiest man in the world, so I'm going to stick with that."

Right: Third place finisher Elate heads out for the post parade. Trainer Bill Mott said, "She got back into good position after that (sluggish start). I thought (Jose Ortiz) was really loaded going into the turn, I thought he was going well. I thought he was going quite well. He had to wait a little until Midnight Bisou went past him and then he came out and around. I don't know if that cost any momentum or not. I don't have any big excuses." 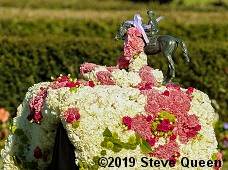 The flowers and trophy for the Apple Blossom. 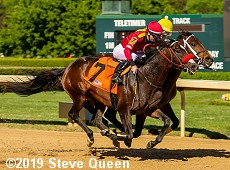 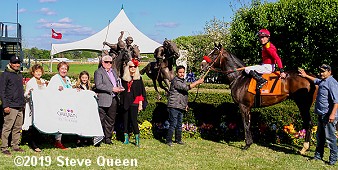 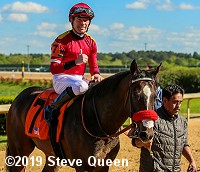 Winning jockey Tyler Baze said, "Doug said to just get him out of the gate good and into a good spot. He said when you think you should go, it's probably time, so go. He told me the horse would fight all the way to the wire and he did. He showed his guts today. Winning trainer Doug O'Neill (by phone from Santa Anita) added, "Oh, man, what a ride. I had talked to Tyler earlier today and just reminded him of how I think he fits that horse so well because that horse, wherever you think you need to move, you've got to move a little bit sooner because he's kind of a grinder. He doesn't have that big stretch run. When he called on him early, it was just perfect. Got him going. To win that photo, that's incredible."