On the Friday of Arkansas Derby weekend, a field of 11 three-year-old fillies contested the $500,000 Fantasy Stakes (G3) going 1 1/16 miles at Oaklawn Park, with the winner earning 100 points as part of the Kentucky Oaks Championship Series. Conditions were excellent at the historic Hot Springs oval, with sunny skies and temperatures in the low 70's for the estimated 17,000 fans in attendance. Honeybee (G3) runner-up Motion Emotion was sent off as the 6-5 favorite. In to challenge her included 3-1 second choice Brill, 3rd in the Chandelier (G1) at Santa Anita last September then 2nd in an allowance at Oaklawn in March, and 11-2 third choice Orra Moor, 3rd in the Busher at Aqueduct.

Jockey Mike Smith sent favorite Motion Emotion to the front first time by and she set fractions of 23.16, 46.76, and 1:11.08 while pressed by Brill and stalked by Orra Moor. Motion Emotion continued to lead to the 1/8 pole through 1 mile in 1:37.20. 9-1 fifth choice Lady Apple, 4th early under Ricardo Santana Jr., came through on the inside on the turn and rallied past Motion Emotion along the rail at the 1/16 pole to win by a length in 1:43.88. It was another 3/4 length back to Brill third.

Also check out Omaha Beach winning the Arkansas Derby and Lady Apple winning the Fantasy during the Racing Festival of the South at Oaklawn. 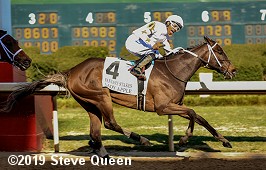 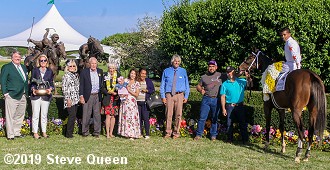 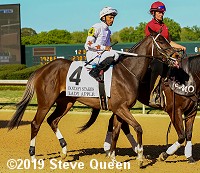 Left: Lady Apple in the winner's circle. Winning trainer Steve Asmussen said, "Ricardo gave her a dream trip and the filly showed tremendous heart. She broke smoothly. He worked out the perfect trip for her. I think the only option was the fence and she showed a lot of heart to go through there. Ricardo showed a ton of confidence in her, and I can't say enough about the heart that the filly showed to run up inside of some very quality fillies. She flies to Churchill Downs on Monday to consider running her in the Oaks."

Right: Lady Apple in the post parade. Winning jockey Ricardo Santana Jr. said, "She got a great trip. I put her in the position we wanted to be in. She kept fighting for the rail. Turning for home I said, ‘I've got no place to go out, so I have to pass through on the rail.' My filly, I'm blessed, she was not scared when I tried to pass, and she did, and she kept fighting." Once she got through, she just kept going. It was a big win." 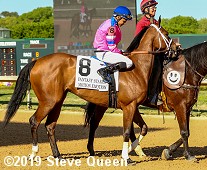 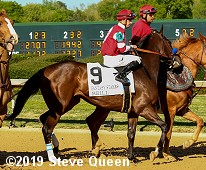 Left: Second place finisher and beaten favorite Motion Emotion in the post parade. Jockey Mike Smith said, "I was going comfortably. She was doing it well within herself. I'm happy with her race other than her getting beat." Trainer Tom Van Berg added, "It's tough. She's running. Set up well. The other one just got us. She ran hard. That's all we can do."

Right: Third place finisher Brill in the post parade. The 3-1 second choice pressed the pace under Florent Geroux and held on to finish third beaten 1 3/4 lengths. The Jerry Hollendorfer trainee improved her record to 1 win, 1 second, and 2 thirds in 5 starts, earning $158,200 for owner OXO Equine LLC. 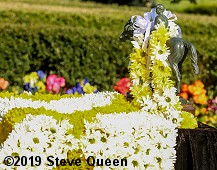 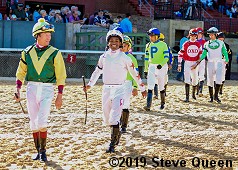 Left: The flowers and trophy for the Fantasy Stakes. Jack Sisterson, trainer of 10th place finisher Oxy Lady said, "Declan (Cannon, jockey) rode her perfectly considering the post position. There's absolutely no excuses. We're not going to make the post the excuse.  She ran her race on the day and she wasn't good enough."

Right: The jockeys walk over to the infield saddling area before the race.