On Saturday, a field of 10 three-year-old fillies contested the $200,000 Honeybee Stakes (G3) going 1 1/16 miles at Oaklawn Park, with the winner earning 50 points in the Kentucky Oaks Championship Series. Morning thunderstorms downgraded the track to good, but the skies were clear and temperatures in the mid 70's in the afternoon for the 16,000 fans in attendance. Motion Emotion was sent off as the 11-10 favorite off two straight allowance wins and making her stakes debut here. In to challenge her included 4-1 second choice Power Gal, winner of the Martha Washington last out, and 15-2 Chocolate Kisses, an allowance winner last out after losing her rider in the Rags to Riches Stakes. 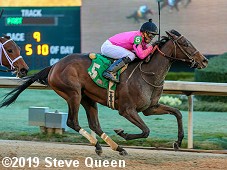 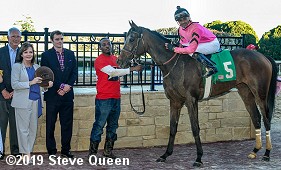 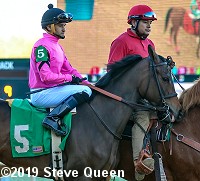 Left: Chocolate Kisses in the winner's circle. Winning trainer Mark Casse said, “I mean she had things go perfect. It set up. They ran fast, but she got in a little trouble early and then she made a big wide move and she just kept going. I was proud of her. It was nice. We watched from Tampa Bay. We didn't have as much luck, unfortunately, in the Tampa Bay Derby. That cheered us up a little.”

Right: Chocolate Kisses in the post parade. Winning jockey Orlando Mojica said, “I know we had a lot of speed in there. I plan was to break and stay third or fourth, but that didn’t work. I tried to keep her outside because I knew she’d be running on the turf. I didn’t want to get a lot of dirt in her face. I knew I had plenty of horse at the 3/8th pole. She finished good.” 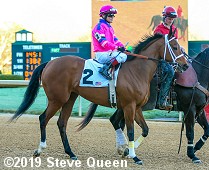 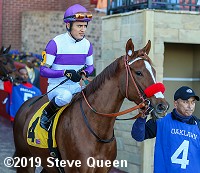 Left: Second place finisher and beaten favorite Motion Emotion returns after the race. Jockey Jon Court said, “She left there running, but she came back to me. The track’s been fast all day. She handled it pretty well. She still had a punch at the end. It took what it took to get by her in the final strides. She was fighting to the end.” Trainer Tom Van Berg added, “You can't go a mile and a sixteenth going 22 2/5 (opening quarter). It's just unfortunate. In my opinion, she was the best and she should have won that race.”

Right: Third place finisher Bizwhacks in the post parade. Jockey Mario Gutierrez said, “My trip was perfect, just perfect. She just got fatigued at the end.” 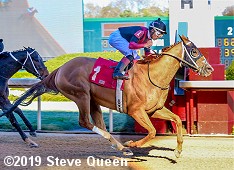 An hour before the Honeybee, a field of 5 older horses sprinted 6 furlongs in the $150,000 Hot Springs Stakes. Whitmore, winner of the last 2 runnings of the Hot Springs, was the 3-5 favorite over 2-1 Share the Upside and 7-1 Heartwood. Share the Upside and 9-1 Welder dueled down the backstretch and around the turn through fractions of 22.22 and 45.08. Entering the lane, jockey Ricardo Santana Jr. sent Whitmore 3 wide to pass the pacesetters, sweeping to the lead through 5f in 57.13. Kept to task by Santana, Whitmore drew off to win by 1 1/2 lengths over Share the Upside in 1:09.39. It was another 1/2 length back to Welder third. 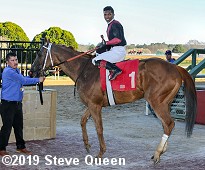 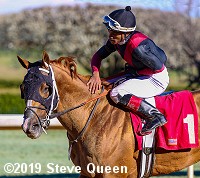 Left: Whitmore in the winner's circle. Winning trainer Ron Moquett said, “He was about 75 percent today. I know him and it's a lot better for us to bring him to a race like this and let him have a race. If he gets tired, it's my fault. But, I'm just going to take care of the horse. The gate guys did great. They showed patience and horsemanship. I’m so appreciative that they’re willing to work with the horse instead of trying to overpower him.” He will go next in the Count Fleet Sprint Handicap (G3).

Right: Whitmore returns after the race. Winning jockey Ricardo Santana Jr. said, “He has been training really good in the morning so we had a lot of confidence in him. He broke pretty good and I stayed behind the speed. That’s where I wanted to be. In the stretch, he looked for the clear and he took me to the wire. He’s a really good horse. I had plenty of horse and I had the position I wanted to be in. It was perfect for me. He’s a class act.” 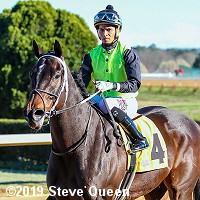 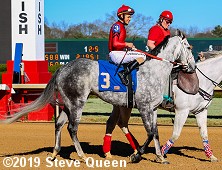 Right: Third place finisher Welder in the the post parade. The Theresa Sue Luneack trainee improved his record to 15 wins, 4 seconds, and 3 thirds in 24. starts, earning $650,151 for owner Ra-Max Farms.