On Saturday, a field of 11 three-year-old fillies contested the $200,000 Honeybee Stakes (G3) going 1 1/16 miles at Oaklawn Park, with the winner earning 50 points in the Kentucky Oaks Championship Series. Conditions were chilly in Hot Springs for the 16,500 fans on hand, with cloudy skies and temperatures in the mid 40's. Elate was sent off as the 9-5 favorite, winner of her debut by 12 lengths but second in the Suncoast Stakes at Tampa in her second start. In to challenge her included 3-1 second choice It Tiz Well, second in the Santa Ynez (G2) before winning an allowance, and 9-2 third choice Chanel's Legacy, winner of both the Dixie Belle and the Martha Washington Stakes.

Jockey Walter de la Cruz sent 30-1 Someday Soon to the lead first time by through fractions of 23.06 and 47.03 while pressed by 7-1 fourth choice Tapa Tapa Tapa and stalked by Chanel's Legacy. On the far turn, Someday Soon tired allowing Tapa Tapa Tapa to inherit the front through 3/4 in 1:11.58. At the top of the lane, 22-1 Benner Island, 5th early, swept 4 wide to gain a short lead through 1 mile in 1:36.50, but It Tiz Well, 4th early under Corey Nakatani, came through lane to win by a length in 1:42.61 over the fast main track. It was another 2 3/4 lengths back to late-running favorite Elate third. 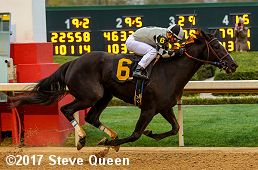 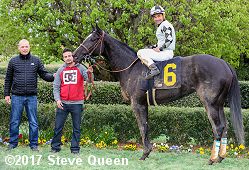 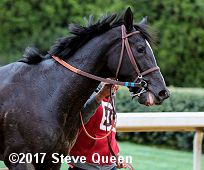 Left: It Tiz Well in the winner's circle. Don Chatlos, assistant to winning trainer Jerry Hollendorfer said, "Jerry has had a lot of confidence in her obviously. He ran her against Unique Bella a couple starts back. He thought this would be a good spot to get her away from her and get her around two turns. We’re getting closer to the Kentucky Oaks. She’s not going to find any easy spots and obviously this wasn’t. It was a good test for her. Jerry knew Corey (Nakatani) knows Oaklawn. He had a good tactical filly and could set her whereever he needed to be. That was the instructions, to just get the best trip he could."

Right: It Tiz Well heads back to the barn after the race. Winning jockey Corey Natakani said, "She is a nice filly. I have always thought high of her. Thank you to Jerry and the owners Tommy Town Thoroughbreds for giving me a chance to ride her. She is special filly and I felt the farther she went the better she would get. Unique Bella is possibly the best 3-year-old in the country and these have a little ways to go to catch up to her. (It Tiz Well) is on the right path and doing the right things and I want to think Jerry one more time for giving me the opportunity." 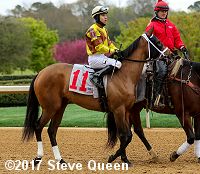 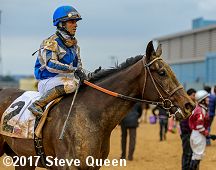 Left: Second place finisher Benner Island in the post parade. Trainer Brad Cox said, "(Owner) Mr. (John Ed) Anthony wanted to try this spot. We knew last time, that wasn’t her. I don’t know if she just needed the race off the layoff last time. It was her first time going around two turns. She caught the outside last time. She was in the 8 or 9 hole last time. Didn’t get a break today being in the 11 hole. I’m not making excuses. We were compromised a little with ground loss around both turns today. But she stepped up and ran the way she trained since we had her last spring. She’s a nice filly and we think a lot of her." Jockey Geovanni Franco added, "She is a very nice filly and was running her eyeballs out. We drew a tough post and she overcame the post, but I think that cost us a little bit in the race. In the end we just got out run in the stretch."

Right: Third place finisher and beaten favorite Elate returns after the race. Jockey Jose Lezcano said, "She ran well. She broke slow and that hurt us. She had to make up a lot of ground today. She is a very nice filly and is improving each race." 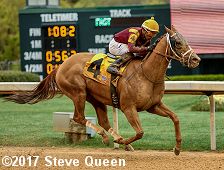 On the undercard, a field of 8 older horses sprinted 6 furlongs in the $125,000 Hot Springs Stakes. Whitmore was the 4-5 favorite over 9-2 Holy Boss and 5-1 Ivan Fallunovalot. Jockey Luis Contreras sent Holy Boss to the lead exiting the chute through fractions of 21.60 and 44.83 while pressed by 28-1 Candy Ruby and stalked by 22-1 Recount. On the turn Holy Boss tired as Whitmore, 6th early, circled the field to gain a 4 length lead midstretch through 5f in 56.68. Kept to task by Ricardo Santana Jr., Whitmore drew off to win by 6 lengths over late-running Ivan Fallunovalot in 1:08.72. It was another 1 1/4 lengths back to 11-1 Fish Trappe Road third. 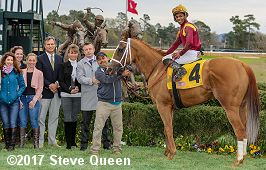 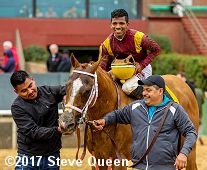 Left: Whitmore in the winner's circle. Winning trainer and co-owner Ron Moquett said, "We had confidence that our rider would make the right decision. I thought the race could unfold to where it would be better for us today to be a little farther off. It worked out. But he's got enough tactical speed that he can put us where we need to be." Moquett added he may go next in the Count Fleet Handicap (G3) on April 15.

Right: Whitmore returns after the race. Winning jockey Ricardo Santana Jr. said, "He is a very nice horse and he is doing really well sprinting. He ran his class out. I was in a perfect spot, right where I wanted, and he ran really well." 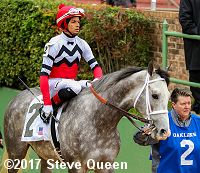 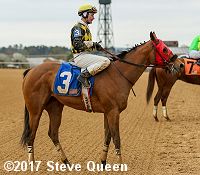 Left: Second place finisher Ivan Fallunovalot heads returns after the race. Jockey Calvin Borel said, "He ran well. He showed up and ran a good race. I wish he had broken a little sharper, but other than that he ran his race. I got him where I wanted in the turn and we just got out run. No excuse."