Santa Anita Park carded 4 graded stakes on the first full weekend of the year. On Saturday conditions were quite damp with the main track rated sloppy and turf races taken off, but by Sunday the skies stayed clear and the track dried out to "good", with temperatures in the mid 60's both days.

Winning trainer John Shirreffs said, "You never know what they're going to do so it's always interesting. We're very proud of him. He's quick. He starts quick, he gets away quickly. But then he checks himself as he gets into the race and he relaxes. It was great to see him pick it back up again and get it done." Jockey Victor Espinoza added, "It didn't surprise me how well he broke out of there today. When he's feeling good, he breaks quickly and already running. In the Breeders' Cup he broke slow but today he came into the race in really good shape and got into it right away."

The $200,000 San Gabriel Stakes (G3) was originally carded as a Grade 2 event at 1 1/8 miles on turf for older horses, but was moved to the main track leading to 4 scratches and a downgrade. Seabiscuit Handicap (G2) winner Ring Weekend was the 8-5 favorite in the field of 8 over 7-2 Twentytwentyvision, third in the Lure Stakes, and 9-2 Point Piper, 6th in the Breeders' Cup Dirt Mile (G1) before finishing 2nd behind California Chrome in the Los Alamitos Winter Challenge. Jockey Kent Desormeaux sent 13-2 fourth choice Blue Tone to the lead first time by and he set fractions of 23.16, 47.17, 1:11.56, and 1:36.72 while pressed by 10-1 A Red Tie Day and stalked by 9-1 Itsinthepost. Entering the stretch, Blue Tone continued to lead, drawing off to win by 1 1/4 lengths over Itsinthepost in 1:49.82. It was another 1 1/4 back to Twentytwentyvision third, while Ring Weekend checked in 5th.

Winning owner Bob Hess Jr. said, "It was apparent there wasn't any pace in the race. The other day when he stumbled, we couldn't have beaten the winner, but I thought we could've been second. He's a big lumbering horse and when he's able to run like this, he's a lot better. We've got some money now, so we're going to run next at Gulfstream in the Poseidon (on the Pegasus World Cup undercard) It's $400,000 and we're going to take a shot." Winning jockey Kent Desormeaux added, "He broke horribly today and I didn't know if he had anything left at the half-mile pole. I absolutely nursed him to the quarter pole and he showed all the class that he has and held them at bay."

Kicking off the Saturday stakes trio was the $100,000 Las Cienegas Stakes, originally scheduled as a Grade 3 at 6 1/2 furlongs on the downhill turf for older fillies and mares, but was moved to the main track causing a downgrade to listed. Cadet Roni was the 3-2 favorite over 9-5 Watch This Cat, 2-1 Paquita Coqueta, and 9-1 Lajatico. Paquita Coqueta led through fractions of 21.58 and 44.44 before Watch This Cat under Corey Nakatani took over at the top of the lane, opening up a 2 1/2 length lead midstretch through 3/4 in 1:09.57. Kept to task by Nakatani she drew off to win by 8 1/2 lengths over Paquita Coqueta in 1:16.41. It was another 4 1/4 lengths back to Cadet Roni third.

Winning trainer Richard Baltas said, "This horse has won down the hill both times and she's impressed me. I was excited about today but the only thing was that we just didn't know about the dirt. I just told Corey to let her have her way. Let her get relaxed and run where she wants to run and he did. He rode her perfectly." Jockey Corey Natakani added, "She's won her last two on the grass and has been doing really well for Richard. .I've ridden two stakes winners for him already and he's put me back into a spot to have a chance at leading rider. He told me that wherever she's placed, just let her get her feet under her and she loved it. She didn't turn a hair out there and she was focused and spot on. She was ready to go today. I was going down the backside with a big grin on my face. I was just cruising. I pounced on them when she was ready to go. I just stayed out of her way."

Trainer Bob Baffert said, "I still have to see how he comes out of it. It was nice to get the work in. It wasn't the ideal situation but we knew he likes the mud, an off track. Great horses always like the mud. I was happy with the way he finished. The other horse, we could have had him a little more in front (at the start of the drill). We got the work in and that was very important. I'd rather work on a nice, dry track. Every time you work on an off track, you're taking that chance, but I got a nice, stiff work into him so that was very important. I got him in 1:11 and change, 1:24, out in 1:37 and change. Once he lost his company he'll just pin his ears. When he has that company, he likes to chase something. He has that tremendous stride. His stride is his biggest weapon."

The feature race on Sunday was the $200,000 Santa Ynez Stakes (G2) for 3-year-old fillies going 7 furlongs on the main track, with the winner earning 10 points for the Road to the Kentucky Oaks. Delta Princess (G3) winner Shane's Girlfriend was the 4-5 choice in the field of 5 over even-money Unique Bella and 12-1 It Tiz Well, both maiden winners last out. 30-1 Resilient Humor set the pace of 22.33 and 44.58 while pressed by Unique Bella and stalked by 13-1 Princess Karen. Entering the lane Unique Bella came out 4 wide and soon opened up by 5 lengths through 3/4 in 1:09.28. Kept to task by Mike Smith, Unique Bella drew off to win by 7 1/2 lengths over late-running It Tiz Well in 1:22.21. It was another 2 1/2 lengths back to Shane's Girlfriend third. 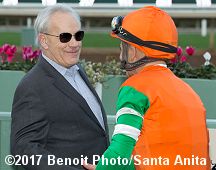 Left: Trainer Jerry Hollendorfer with jockey Mike Smith after winning the Santa Ynez with Unique Bella. Hollendorfer said, "I've always liked her. Today, she showed that she's brilliant. We thought she'd jump out of there a little better. I thought she would be close to the lead. Mike used his judgement, got behind and then got to the outside so it worked out well and our other filly (It Tiz Well, 2nd) also got G2 placed, so we're very pleased right now." Smith added, "When I saw everyone else send, I thought it was a good time to take a hold of her and see what happens. It didn't seem to bother her. When we hit the far turn, it was like she was breathing different air."