The $1 million Ricoh Woodbine Mile (G1) celebrated its 23rd renewal on Saturday afternoon. Run at 1 mile around one turn of the E.P. Taylor Turf Course, it features some of the best turf milers in North America and Europe looking for an automatic entry into the Breeders' Cup Mile at Santa Anita under the Breeders' Cup Challenge "Win and You're In" promotion. Conditions were excellent with mostly sunny skies and a daytime high of 22.3 C (72.1 F). After overnight rains the Taylor course was rated good-to-firm GoingStick reading of 9.2).

A field of 11 made final entry with no scratches, with filly Got Stormy sent off as the 3-2 favorite off wins in the De La Rose Stakes and the Fourstardave (G1) at Saratoga. In to challenge her included 7-2 second choice Raging Bull, runner-up in the Fourstardave after finishing 2nd in the Manhattan (G1), and 4-1 third choice Synchrony, winner of the King Edward (G2).

Jockey Gary Boulanger sent 15-1 Silent Poet to the front down the backstretch and he set fractions of 22.84 and 44.43 while pressed by 115-1 longest shot Admiralty Pier and stalked by 12-1 Awesometank. At the top of the lane the pacesetters tired as jockey Tyler Gaffalione, 4th early aboard favorite Got Stormy, swept to lead through 3/4 in 1:08.33. Got Stormy continued to lead to midstretch through 7f in 1:20.39, but 45-1 El Tormenta, 5th early under Eurico Rosa da Silva and blocked early, found room between horses and drove on through to prevail by 1/2 a length in 1:32.60. It was another 1/2 length back to late-running 13-2 Lucullan third, and a neck more to Raging Bull fourth. After a lengthy inquiry into the stretch run, Lucullan (ridden by Luis Saez) was disqualified and placed 4th behind Raging Bull (ridden by Joel Rosario) for interference at the 1/16 pole. 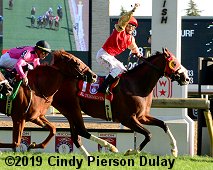 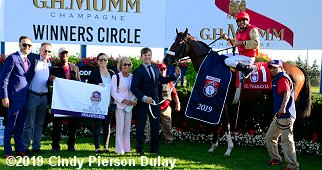 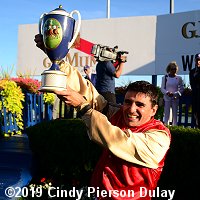 Left: El Tormenta in the winner's circle. Michael Balaz, son of owner Rick Balaz said, "Obviously with the legacy of the farm it's something really special, and having this be a homebred and having so many of our good ones being homebreds, it makes it that much more of a family thing. I think that (whether to run in the Breeders' Cup Mile) will be a decision that the higher-ups will have to make, and everyone will have to get together. I don't see why not after running like that."

Right: Winning jockey Eurico Rosa da Silva celebrates with the trophy. Da Silva announced earlier in the season that he will retire from the saddle at the end of the year. He said, "This was my last opportunity to win this race – it was the only one left (after the Queen's Plate and Canadian International). And this was my opportunity, and here we are. I was fully focused. This is for Canada! My trip was just perfect, he was just so focused. When we turned home, I had lots of horse. When the room came, we just took off from there. He gave everything he could." 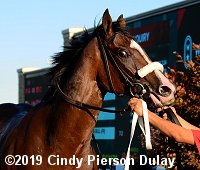 Right: El Tormenta heads back to the barn after the race. Winning trainer Gail Cox said, "Oh, it's huge. It's a Grade 1 win and it's a 'Win and You're In,' so it's huge. I was a little worried with the one-hole and being on the rail because if you've seen his past three starts, they've been troubled. I just think he was laying closer and really bullied his way through a little bit. He's a very, very nice horse, and was probably overlooked here. Last year, he had a totally different style of running. This year, he's more relaxed and we thought he might like to go a little bit further." 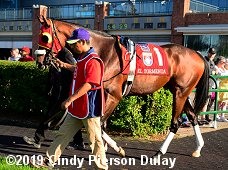 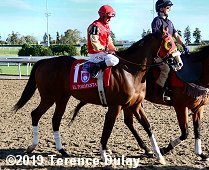 Left: El Tormenta in the paddock before the race. Cox added, "Last year, I thought he was a sprinter. He ran shorter and he ran a different style. This year, every start, we thought he'd probably like to go a little farther. I was just hoping he had room to run there. I just wanted him to have a little bit of space because he's pretty tough and can bully his way through. He's tough as nails, he's very very competitive and doesn't give up. In some of the other races, even having a poor trip, being yanked back, yanked around, he always runs at the end."

Right: El Tormenta in the post parade. Da Silva added, "It was a little tough with Pink Lloyd (declared a non-starter in Bold Venture, earlier in the card) when he broke from the gate today, but I keep talking to myself, 'Just focus on what you need to focus on, and keep faith in your horse. And never give up.' This horse ran so beautifully. Good luck to everybody!" Asked about his decision to retire at age 44, he said, "Listen, I made this decision for my kids. I want to be with my family, I want to have time to be a husband and father. I've been a jockey for 30 years, now it's time for me to be a father and husband." 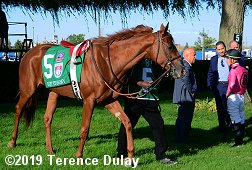 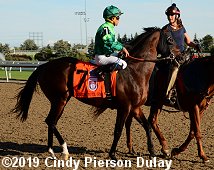 Left: Second place finisher and beaten favorite Got Stormy in the paddock before the race. Trainer Mark Casse said, "This is a tough place to win. There is a huge home field advantage. I was just a little worried that they weren't going to carry her far enough and that she'd make the lead. But the winner ran very well, showed a lot of guts down inside. I feel extremely confident that we'll be right there in the Breeders' Cup." Jockey Tyler Gaffalione added, "Mark and I were just walking around the rail and it's rock hard, it seems like it might be the best spot on the track. The post position was good, we got a beautiful trip. She ran her heart out. She gave us everything she had. I'm looking forward to her in the Breeders' Cup. She has a lot of quickness to her and I think Santa Anita (2 turn mile) will fit her perfectly. She laid it all out there today."

Right: Third place Raging Bull (moved up from 4th via DQ) in the post parade. The 7-2 third choice was last early under Joel Rosario, encountered interference at the 1/16 but still rallied late to finish 4th beaten 1 1/4 lengths. The Chad Brown trainee improved his record to 5 wins, 2 seconds, and 2 thirds in 12 starts, earning $920,750 for owner Peter Brant. 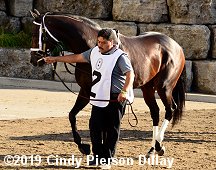 Fourth place Lucullan (disqualified from 3rd) walks over before the race. The 13-2 fifth choice was 10th early under Luis Saez and ralled to finish 3rd beaten 1 length, but was placed 4th by the stewards. The Kiaran McLaughlin trainee has a record of 5 wins, 2 seconds, and 2 thirds in 12 starts, earning $400,925 for owner-breeder Godolphin. 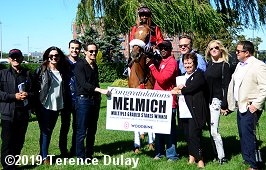 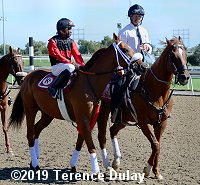 A retirement ceremony took place in the walking ring prior to the fifth race before Melmich made his final on-track appearance by leading the post parade for that race. Campaigned by trainer Kevin Attard for owners Stephen Chesney and Cory Hoffman for the majority for his career, the eight-year-old Wilko-Little Swoon gelding achieved top three finishes in 38 of his 46 starts while earning $1,388,331 in purses. Among his 17 career wins, Melmich racked up eight stakes and a track record in rein to jockey Eurico Rosa Da Silva. His graded stakes wins include the 2015 Valedictory (G3), 2016 and 2017 Dominion Day (G3), and the 2017 Seagram Cup (G3) and Durham Cup (G3). In his final start he was pulled up in this year's Singspiel Stakes (G3) having bled during the race. He was donated to LongRun Thoroughbred Retirement to be retrained for life off the track.