After repeat Dubai World Cup (G1) winner Thunder Snow scratched, McKinzie was sent off as the 4-5 favorite in the field of 7 off his 2nd place finish in the Metropolitan (G1) after winning the Alysheba (G2) and finishing second in the Santa Anita Handicap (G1). In to challenge him included 2-1 second choice Preservationist, winner of the Suburban (G2), and 9-2 third choice Vino Rosso, winner of the Gold Cup at Santa Anita (G1).

Jockey Junior Alvarado sent Preservationist to the lead first time by through fractions of 23.77, 47.48, and 1:11.30 while pressed by McKinzie and stalked by 24-1 Monongahela and Vino Rosso. Entering the stretch, jockey Mike Smith sent McKinzie 4 wide to sweep to the front past the tiring Preservationist through 1 mile in 1:35.01. Kept to task by Smith, McKinzie drew off late to win by 1 3/4 lengths over late-running 17-2 Yoshida in 1:47.10. It was a long 4 3/4 lengths back to Vino Rosso third. 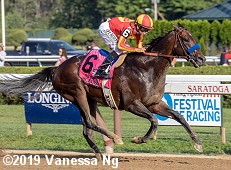 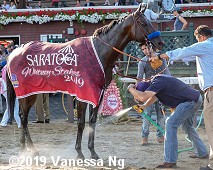 Left: McKinzie in the winner's circle. Winning co-owner Mike Pegram said, "Saratoga is Saratoga, what can you say? You're just happy to have a horse good enough to race here. We had the opportunity to come, and here he was. It's history. When you come here, you feel the history. You appreciate it. Big Brad (McKinzie, the horse's namesake) was a one-of-a-kind person, and this horse is a one-of-a-kind horse. When Bobby [Baffert] called me and told me we had a good one, I said, 'There's only one name we can give him.' And you've seen him today."

Right: McKinzie gets hosed off after the race. Winning trainer Bob Baffert said, "This win is very emotional for me. I was telling John (Hendrickson, husband of the late Marylou Whitney) this horse was named after a close friend of ours that passed away a few years ago. I got very emotional after he won. I was hoping that when I was thinking about running here, I'd never won this race and wanted to see her here so it's kind of sad. It's a great honor to win the Whitney. I've never won the Whitney, so this is a huge moment for me. To me he's the best horse in the country. It's exciting. Our whole ownership group is here and it's exciting to come to Saratoga and they all came and enjoyed themselves. This is unbelievable. This is real horse racing right here. Until you've been here and experienced it, it's just a beautiful scene and when you see that you know that horse racing is still alive and strong." 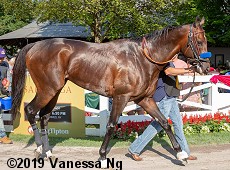 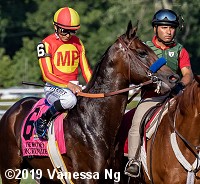 Left: McKinzie in the paddock before the race. Winning jockey Mike Smith said, "That was incredible. He ran big. There were some good horses in there so he had to run, but he ran. That's the important thing. He had to work at it, but he got away from them and the best part of it was at the end of the race. That gives me confidence going a mile and a quarter down the road. The break was huge. Today, he felt better than he ever had. I knew he was going to jump well today."

Right: McKinzie in the post parade. Smith added, "The inside didn't look like the place to be. Everything out in the middle of the racetrack was winning and I saw the option, but I wanted to ride hard enough to separate from the field, so that if I needed to get out, I could get out. It worked today. it might have been a horrible move some other time. [Yoshida] came at me with a big run and Joel [Rosario, aboard Yoshida] is such a great rider. He's so sharp. He knows not to come right next to me because this horse will take off. So, he kind of fooled us a little and went away from us. I put the whip to my left hand and I cocked his head out and once he saw him, I didn't even have to use it." 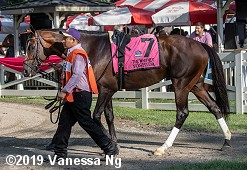 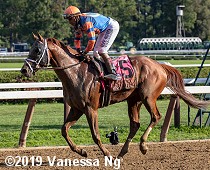 Left: Second place finisher Yoshida in the paddock. Trainer Bill Mott said, "He ran a good race. He came with a good run. He saved ground on the first half of the turn, he did tip out maybe a little bit early and came around a few horses, but the horse was running and he didn't have to stop his momentum and he [Joel Rosario] kept him rolling. We were pleased enough to probably go on to the next one, maybe the Woodward, we'll see. This was a much better race he put in and a much better bid than in the Stephen Foster. He was actually a little closer today. The field was bunched up and going into the first turn, he wasn't over ten lengths off the pace and for him that's not bad."

The horses break from the gate for the Whitney. Baffert added, "I don't know where we'll go from here. I'd like to run him one more time before the Breeders' Cup Classic. Originally, my plan was to run him in the Met Mile and keep him in California. I said I need to get a sexy win in him and the Whitney - it doesn't get sexier than that." 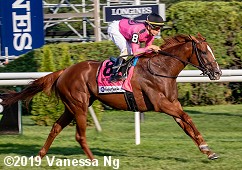 Closing out the stakes action on Saturday, the $100,000 Fasig-Tipton De La Rose Stakes featured a field of 6 older fillies and mares going 1 mile on the inner turf course. Distaff Turf Mile (G2) runner-up Got Stormy was sent off as the 2-1 favorite over 5-2 Stella di Camelot, 3rd in the Intercontinental (G3), and 11-4 Capla Temptress, winner of the Just a Kiss.

15-2 Divine Miss grey and 16-1 Desert Isle dueled for the lead first time by and around the clubhouse turn through fractions of 23.75 and 46.93 while stalked by 5-1 Rock My Love. Turning for home, Desert Isle opened up a 3 length lead through 3/4 in 1:10.17 but tired badly late. Got Stormy, 4th early under Tyler Gaffalione, came out 4 wide into the lane and rallied to win going away by 4 lengths over late closing Capla Temptress. It was a nose back to Stella di Camelot third.
Results Chart 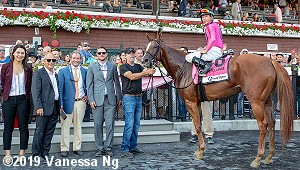 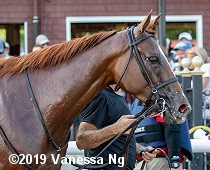 Left: Got Stormy in the winner's circle. Winning trainer Mark Casse said, "This week here, I've had everything go wrong, so I was just watching. I've run some horses this week I thought would run well, and they didn't run any good, so I lost a little confidence. She made [the week] good. [Co-owner] Gary [Barber] called and said, 'What about the Fourstardave?'. We may go to Woodbine and run her a mile in the Woodbine Mile. She has already run once there and ran really well. I'm hoping she's our next Tepin."

Right: Got Stormy heads back to the barn. Winning jockey Tyler Gaffalione said, "She had been working lights out. I've really been looking forward to her getting back to the races and she showed exactly why. She's a nice filly who has a ton of talent and she seems to get better this year. I tapped her on the shoulder once and she exploded, so I just wrapped back up on her. I had plenty of horse left but that's as easy as it gets. To be honest, I don't know if it's this filly or if I just had a lot of confidence today, but I knew at any point around the track I was going to win. She was ready for a big race." 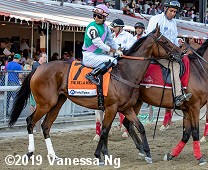 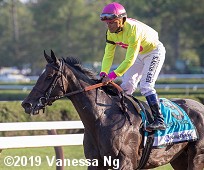 Also on the card: The Test, Lure, and Troy Stakes