The Belmont Stakes Racing Festival runs from Thursday to Saturday, highlighted by the 151st Belmont Stakes run on Saturday, the third leg of the Triple Crown series. Conditions were excellent for the 3 stakes races on Thursday afternoon, with partly cloudy skies and temperatures in the low 80's, a fast main track and the turf courses firm. 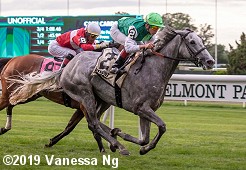 The highlight on Thursday was the $200,000 Intercontinental Stakes (G3) for older fillies and mares sprinting 7 furlongs on the Widener turf. Significant Form was sent off as the 5-2 favorite in the field of 9, unraced since 4th in the Winter Memories Stakes at Aqueduct in November. In to challenge her included 3-1 second choice Broadway Run, second in the Licence Fee Stakes at Belmont, and 4-1 third choice Stella di Camelot, 5th in the Mrs. Revere Stakes (G2) at Churchill Downs.

Jockey Jose Ortiz sent 6-1 Fire Key to the lead she she set fractions of 23.03 and 45.99 while pressed by Broadway Run and stalked by 13-2 Zonza. Turning for home, Fire Key continued to lead through 3/4 in 1:08.46, but favorite Significant Form, 6th early under Irad Ortiz Jr., came through between horses and rallied to win by 1/2 a length in 1:19.83, just 0.60 second off the course record. It was a neck back to late-running Stella di Camelot third. 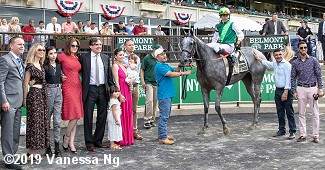 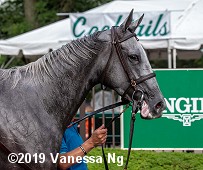 Left: Significant Form in the winner's circle. Winning trainer Chad Brown said, "She ran really well. We've been wanting to cut her back for a while and we got the perfect opportunity to do so. Irad rode a great race and luckily it all worked out for her. She's really filled out going from three to four. I was commenting to my assistant in the paddock when I put the saddle on her that we put a size bigger girth on her today. The time off has really done her a world of good. On paper, it looks like she's run her best races fresh and with the pace that was set in front of her, she was finally not pulling against the rider. It was really the trip I was looking for. We had a plan and it worked out well."

Right: Significant Form heads to the barn after the race. Winning jockey Irad Ortiz Jr. said, "I had so much horse, so I knew that whatever hole I could make, I was going to get through. I just waited there and was patient and tried to make the right decision with her. It worked out well. (The cutback in distance) was good for her because she had some horses in front of her. Last year, we were fighting her too much going longer distances." 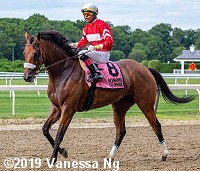 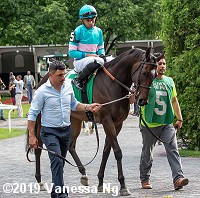 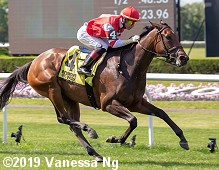 Kicking off the 2019 Belmont Stakes Festival stakes action was $200,000 Wonder Again Stakes (G3) featuring a short field of 5 three-year-old fillies going 1 1/8 miles on the inner turf course. Breeders' Cup Juvenile Fillies Turf (G1) winner Newspaperofrecord was sent off as the 2-5 favorite off her 2nd place finish in the Edgewood (G3). In to challenge her included 5-1 second choice Cambier Parc, 4th in the Edgewood after winning the Herecomesthebride (G3), and 11-1 third choice Kelsey's Cross, maiden winner last out.

Jockey Irad Ortiz Jr. sent Newspaperofrecord to the lead first time by and she set fractions of 23.96, 48.58, and 1:12.48 while pressed by 42-1 longest shot Blonde Moment and stalked by Cambier Parc. Newspaperofrecord continued to lead to midstretch through 1 mile in 1:35.07 but Cambier Parc and jockey Jose Ortiz rallied by late to win by 1 1/4 lengths in 1:46.34. It was a long 4 lengths back to Kelsey's Cross third. 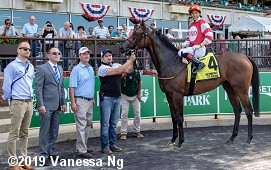 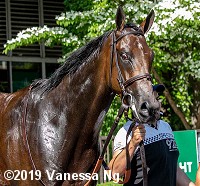 Left: Cambier Parc heads to the winner's circle. Winning trainer Chad Brown said, "I'm not surprised Cambier Parc ran this well. That's why we had her in the race. She's a much better horse on firm ground. That race at Churchill [fourth in the Edgewood] didn't do her any justice. She has the bloodlines to do it. Her mother [Sealy Hill] was second in the Breeders' Cup Filly and Mare Turf. As you saw today, she's an up-and-comer in this division. I don't want to take anything away from her win today. It was her day."

Right: Cambier Parc heads back to the barn. Winning jockey Jose Ortiz said, "She broke good and relaxed nicely. Nobody else could keep up by the quarter pole and I got an easy, perfect trip. At the top of the stretch, I didn't know if I was going to get there because Newspaperofrecord is a really good filly, but when I saw that she didn't get away from me, I thought I had a shot passing the eighth pole. In the last eighth of a mile, my filly was just better." 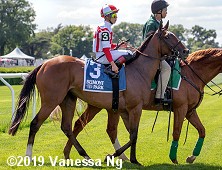 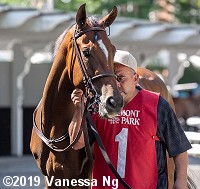 Left: Second place finisher and beaten favorite Newspaperofrecord heads to the starting gate. Trainer Chad Brown said, "Newspaperofrecord was disappointing. She couldn't stay 1 1/8 today. I thought Irad did all right today. She's always going to be a horse that tugs along on the front end. I thought the fractions were fair though. I have to believe the turf was drying out well. I didn't see any excuse for the trip she got, or the fractions. The only thing I would say about her is what I'd like to see next time against a bigger field if we go on to the Belmont Oaks. I would like to see her have someone to follow deeper into the stretch."

Right: Third place finisher Kelsey's Cross in the paddock. She improved her record to 1 win, 1 second, and 1 third in 3 starts, earning $57,900 for owner Bacon Barn and owner-trainer Patrick Biancone. 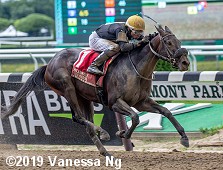 The $150,000 Astoria Stakes for 2-year-old fillies sprinting 5 1/2 furlongs on the main track. Perfect Alibi was sent off as the 5-4 favorite in the field of 7 over 3-1 Ms Headley and 13-4 third choice Maryanorginger.

Jockey Jevian Toledo sent 8-1 Twirling Owen to the lead and she set fractions of 22.13 and 45.53 while pressed by Ms Headley and stalked by 10-1 Reiterate. Entering the lane, jockey Jorge Vargas Jr. moved Maryanorginger out for room and she outfinished favorite Perfect Alibi to win by 3/4 length in 1:03.94. It was another 1 1/4 lengths back to 18-1 Talk You Out of It third. 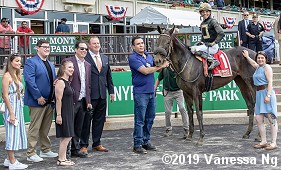 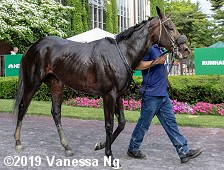 Left: Maryanorginger in the winner's circle. Winning trainer Jeremiah Englehart said, "The first time out it's really not the way you want to start against winners, but she's really been professional," said Englehart. "Other than a little rear up in the paddock, she's been really good and really smart. I was actually targeting a turf race, but everyone at the barn was telling me do dirt. And Al [Gold, winning owner] likes to run his horses the first time on dirt. And I said, 'all right.' We took a shot and it paid off."

Right: Maryanorginger heads back to the barn after the race. Winning jockey Jorge Vargas Jr. said, "I stayed calm [after she stumbled] because she was taking dirt so good. When she got clear, she was long gone. I think she's going to appreciate more distance. I hadn't been on her before, but Mr. Englehart told me she was a nice filly. I was pretty confident in her." 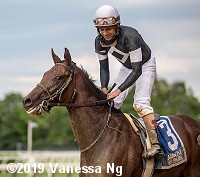 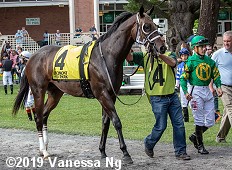 Right: Third place finisher Talk You Out of It in the paddock before the race. The Bruce Brown trainee improved her record to 2 seconds and 1 third in 3 starts, earning $47,000 for owner Windylea Farm.