On Wednesday, the eve of the 2019 Canadian Premier Yearling Sale, Woodbine Racetrack hosted the 7th renewal of "Canadian Millions Night", a series of 6 stakes races restricted to Canadian-breds who went through the Woodbine sales ring as a yearling. The race night is co-sponsored by Ontario Lottery and Gaming (OLG) with purses worth a combined $750,000. Despite some occasional drizzle, conditions were excellent with partly cloudy skies, a light breeze, and a race time temperature of 22 C (72 F), with the main Tapeta track fast and dry, and the E.P. Taylor Turf Course rated good-to-firm (GoingStick 10.6) with the rail out 45 feet (Lane 4).

The $175,000 OLG Simcoe Stakes Presented by Samuel, Son and Co. Limited featured a field of eight 2-year-old males sprinting 6 1/2 furlongs on the Tapeta main track. Maiden winner at second asking Goldmine Cat was sent off as the 7-5 favorite over 3-1 Pinky Dude and 13-4 Forester's Fortune. Jockey Leo Salles sent Forester's Fortune to the lead exiting the chute through fractions of 22.02 amd 44.35 while pressed by 17-2 fourth choice Rockcrest and stalked by 29-1 Lakeside Park. Entering the stretch Forester's Fortune tired as Rockcrest inherited the front, opening up by 5 lengths midstretch through 3/4 in 1:10.66. 12-1 Red Astaire put in a late rally from 5th to no avail as Rockcrest, kept to task by jockey Sahin Civaci, cruised to a 3 1/4 length win in 1:18.14. It was a head back to favorite Goldmine Cat third. 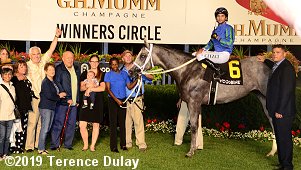 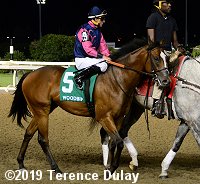 Left: Rockcrest in the winner's circle. Winning jockey Sahin Civaci, celebrating his first Woodbine stakes win, said, "He saw the outside horse and he ducked in a little bit [down the backside] but he does that sometimes in the mornings as well. I sat off the pace and I had a good position, so I was happy with that. Down the lane, he just came running so I'm really happy." Trainer Nigel Burke added, "It's an indescribable feeling so I'm just going to enjoy the moment and celebrate."


The $100,000 OLG Kenora Stakes Presented by HBPA of Ontario featured 6 older horses sprinting 6 furlongs. Two-time winner and 2017 Horse of the Year Pink Lloyd was sent off at prohibitive odds of 15-100, over 9-2 Dixie's Gamble and 12-1 Circle of Friends. Place and show wagering was not offered. Jockey Patrick Husbands sent Circle of Friends to lead exiting the chute through fractions of 22.73 and 44.78 while pressed by Pink Lloyd and stalked by 31-1 Magical Man. On the turn, jockey Eurico Rosa da Silva sent Pink Lloyd to take over through 5f in 56.39. Kept to task by Da Silva, Pink Lloyd drew off late to win by 5 1/4 lengths over Circle of Friends in 1:08.29, just 0.23 seconds off his own track record. It was another 1 3/4 lengths back to Magical Man third.

Winning trainer Bob Tiller said, "That is his 18th stakes win, his 21st win of his career, he's better than ever. He's won multiple stakes multiple times. If this is not the greatest sprinter there ever was in Canada and if this is not the next Horse of the Year twice in the last three years. I believe he will be. Watch out."

The $175,000 OLG Muskoka Stakes Presented by CTHS (Ontario Division) featured a field of 10 two-year-old fillies sprinting 6 1/2 furlongs on Tapeta. Debut winner She's a Dream was sent off as the 3-4 favorite over 7-2 Blessed Truly and 9-1 Kit Kat Katie. Jockey Eurico Rosa da Silva send Blessed Truly to the lead through fractions of 21.96 and 44.29 while pressed by 11-1 Gelato Amore and stalked by Kit Kat Katie. Turning for home Blessed Truly left the field in her wake opening up by 6 1/2 lengths through 3/4 in 1:09.56. 19-2 fourth choice Tara Dawn rallied fom 8th to no avail as Blessed Truly cruised to a 5 length win in 1:16.51. It was another 1 3/4 lengths back to favorite She's a Dream third.

Winning owner Derek Chin said, "She had the class, she had the looks and the presence. Of course, we didn't know at that time her (half) brother (One Bad Boy) would win the Queen's Plate so the mare is doing very well. I think her sister is Ms Bad Behavior and she has won over $300,000 at Santa Anita so it looks good. Everything hopefully points to a very nice horse in the making. It looks like somehow I am blessed on this particular night and I want it to continue so that means I'll have to buy another horse tomorrow. It's very enjoyable, and a very beautiful night." 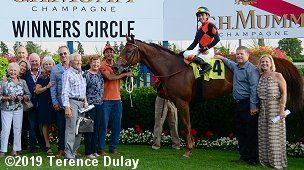 Owner-trainer Nick Nosowenko said, "We changed our mind (which race to run, the Halton or the Elgin) about 50 times in the last week. It really came down to if we got rain last night. It's been so hard and I wasn't going to run him if it was very hard like it's been all week so I think we got lucky and he ran a huge race. He loved it out there." 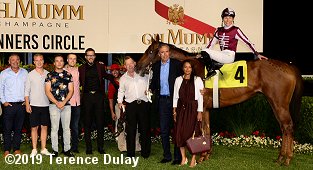 The $100,000 OLG Algoma Stakes Presented by CTHS (Ontario Division) featured a field of 8 older fillies and mares going 1 1/16 miles. Allowance winner Hell N Wild was sent off as the 7-5 favorite over 2-1 Red Cabernet and 6-1 Alice's War. Jockey Rafael Hernandez sent 7-1 fourth choice Crumlin Queen to the lead through fractions of 24.76, 49.37, and 1:13.3 while pressed by Red Cabernet and stalked by Hell N Wild. Tirning for home, jockey Emma-Jayne Wilson sent Red Cabernet to lead through 1 mile in 1:38.70. 11-1 Bear Paw rallied from 6th but Red Cabernet held her off by 1 1/4 lengths in 1:45.45. It was another 3/4 length back to Crumlin Queen third, while favorite Hell N Wild faded to finish 6th.

Winning jockey Emma-Jayne Wilson said, "I think she a good horse. She's versatile, she does the best every time she comes out to play. My biggest concern was what the pace structure was going to be like early. I was hoping to have a little more in front of me to cover her up, but she stalked the pace happy, you know, outside of cover, and she was confident and gained the whole way down the lane." 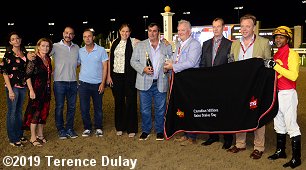 Closing out the Wednesday night stakes sextet at 10:10pm was the $100,000 OLG Elgin Stakes Presented by CTHS (Ontario Division). Originally 6 made final entry but after 3 scratched just 3 went to post, with Steady Growth Stakes winner Kingsport sent off as the 7-10 choice over 2-1 Thor's Rocket and 11-4 Aheadbyacentury. Jockey Eurico Rosa da Silva sent Aheadbyacentury to lead through slow fractions of 26.06 and 50.57 while flanked by both Thor's Rocket and Kingsport. On the far turn Thor's Rocket took over through 3/4 in 1:13.97, but jockey Patrick Husbands sent Kingsport to challenge at the 3/16 pole setting up a 3 way sprint to the line. Kingsport outfinished Thor's Rocket to win by head in 1:44.18. It was just 3/4 length back to Aheadbyacentury third. During the gallop out, Husbands pulled up Kingsport at the 3/4 pole and dismounted. Kingsport was vanned off from there and did not return to the winner's circle, however later reports indicate he safely returned to the barn.

The Sid Attard trainee improved his record to 13 wins, 7 seconds, and 3 thirds in 33 starts, earning $792,618 for owners Goldmart Farms and Royal Laser Racing. 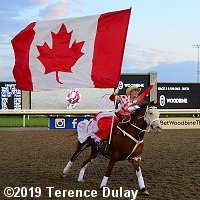 The Canadian Cowgirls Rodeo Drill Team performed a precision riding routine to music for the fans between the Halton and Kenora Stakes.