The last Grade 1 races of the Canadian racing season were run at Woodbine on Sunday, highlighted by the 82nd renewal of the $800,000 Pattison Canadian International (G1), featuring top older horses going 1 1/2 miles, 1 complete lap of the E.P. Taylor Turf Course. Due to early morning rain, the course was officially rated good, but with a 9.4 GoingStick reading, would be called "good-to-firm" in Europe. Conditions were typical for mid October in Toronto, with partly cloudy skies and a post time temperature of 12 C (53 F).

A short field of just 6 faced the starter, with Ziyad sent off as the 6-5 favorite off his Grand Prix de Deauville (G2) win after finishig second in the Grand Prix de Chantilly (G2) and the Grand Prix de Saint Cloud (G1). In to challenge him included last year's winner and 3-2 second choice Desert Encounter, winner of 3 straight including the Legacy Cup (G3) at Newbury, and 9-1 third choice Nessy, second in the Northern Dancer Turf (G1), the main local prep for the International.

At the start, Desert Encounter inexplicably dwelt at the start and leaving 5 lengths behind as jockey Maxime Guyon sent favorite Ziyad to the front first time by through slow fractions of 26.31, 52.26, 1:16.93, and 1:41.23 while pressed by 11-1 Pumpkin Rumble and stalked by 12-1 Pivoine. Turning for home, Ziyad continued to lead through 1 1/4 miles in 2:05.23 and held on to midstretch through 1 3/8 in 2:18.31. Alounak, 5th early, came out at the 5/16 pole for room for his rally, while Desert Encounter, trailing the entire field for 10 furlongs, came through between horses midstretch. Confidently handled by Andrea Atzeni, Desert Encounter gained the lead just inside the 1/8 pole and was all out to hold off Alounak by 1/2 a length in 2:28.62. It was a neck back to pacesetting favorite Ziyad third. 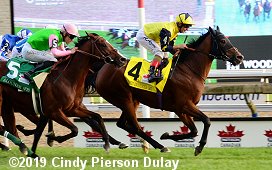 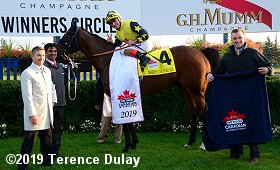 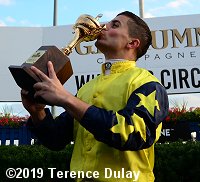 Left: Desert Encounter in the winner's circle. He is only the third repeat Canadian International winner after George Royal (1965 and 1966) and Joshua Tree (2010, 2012, 2013). Phil Robinson, racing manager for owner Abdulla Al Mansoori, said, "It would be lovely (to try for the three-peat). I dare say if he's still a happy horse like he is now, for sure, he'll be back. He enjoys it here, why not? The last three of four races he's just never stopped improving, he's still improving. You expect it maybe from a four or five-year-old but I think mentally he's improving so much. He's enjoying his racing, he's just in a very happy place this moment."

Right: Andrea Atzeni kisses the trophy. Atzeni said, "Jamie Spencer (on for the past three starts, all wins), unfortunately, couldn't ride him today, so I was lucky enough to get back on him. He's been winning in England, but dropping back to last. I spoke to David (Simcock, trainer) before the race, and he was very keen for me to get the horse to relax." 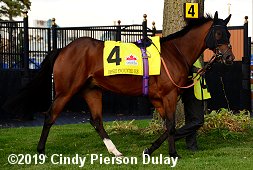 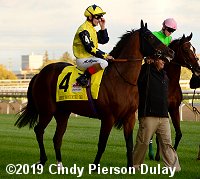 Left: Desert Encounter in the paddock before the race.

Right: Desert Encounter behind the starting gate. Atzeni added, "He's a good horse, he likes it here. He loves the ground. And, I think he's actually a better horse than he was last year. Coming into the straight, obviously, I had options. I could have gone around them but I decided to go inside. I thought (Ziyad) was the one to beat and I tracked him up through the straight and picked him up very nicely. He was the best horse in the race." 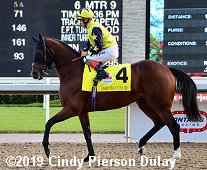 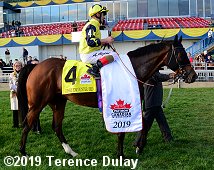 Left: Desert Encounter in the post parade. Winning jockey Andrea Atzeni said, "It's beautiful ground, really – good ground. It's a beautiful track, and I've been very lucky here. It's a fair track. It's always a pleasure to come back."

Right: Desert Encounter parades for the fans after the race. 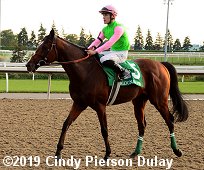 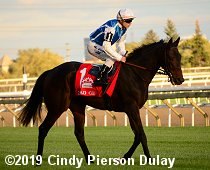 Left: Second place finisher Alounak returns after the race. Holger Faust, racing manager for owner Darius Racing said, "He didn't break that good because we actually wanted to be more with the front. We wanted to be in the second position behind Ziyad because we knew Ziyad would try to make it post to post. That plan didn't work out, so the jockey took 'Plan B' and we are happy with the result. To be honest, I was always looking with one eye on our horse and one eye on Desert Encounter because I really expected Desert Encounter to be very strong and I had the feeling that he would catch Ziyad. But I saw that Desert Encounter was traveling a little bit better in the straight so that's why I was fighting for the second place."

Right: Third place finisher and beaten favorite Ziyad behind the starting gate. The 6-5 favorite set the pace under jockey Maxime Guyon but was headed inside the 1/8 pole to finish third beatem 3/4 lengths. The Carlos Laffon-Parias trainee improved his record to 5 wins, 6 seconds, and 3 thirds in 17 starts, earning $486,118 for owner-breeder Wertheimer et Frere. 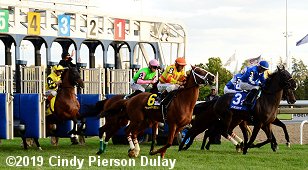 The field breaks from the starting gate for the Pattison Canadian International with eventual winner Desert Encounter spotting the rest of the field several lengths at the start. Andrea Atzeni aboard Desert Encounter added, "The plan was to jump slow and he probably jumped a stride slower than I would have liked. But it's 1 1/2 miles, it's a long way, it's a small field. So we were never panicking. The plan was always to sit last and come through them. So I wasn't too worried about it."