Wednesday at Churchill Downs was nice weather again and several Kentucky Derby contenders galloped, including Omaha Beach. Code of Honor, winner of the Fountain of Youth (G2) winner and third in the Florida Derby (G1), arrived from Keeneland for trainer Shug McGaughey. Kentucky Oaks contender Jeltrin is schedulted to work Thursday morning at Gulfstream Park then van to Kentucky on Saturday.

COUNTRY HOUSE / TACITUS – Mrs. J.V. Shields, E.J.M. McFadden Jr. and LNJ Foxwoods' Country House and Juddmonte Farms' Tacitus walked through the paddock and then galloped a mile and a half Wednesday morning. Marianne Scherer was on Country House and Juan Quintero was aboard Tacitus. Trainer Bill Mott said that no rider has been confirmed for Country House. Jose Ortiz has the mount on Tacitus.

IMPROBABLE – The Arkansas Derby and Rebel runner-up, who races for WinStar Farm, China Horse Club International and Starlight Racing spent a quiet morning on the Churchill Downs track Wednesday under exercise rider Jose Contreras preparing for the May 4 Kentucky Derby.

"We jogged to the gate, and galloped maybe three-quarters of a mile, it was a relatively light day today," said Jimmy Barnes, assistant to trainer Bob Baffert. Barnes said Improbable's Derby stablemates, Game Winner and Roadster, is scheduled to arrive from Southern California Saturday, April 27. Irad Ortiz Jr. has the mount on Improbable in the Derby.

MASTER FENCER – Katsumi and Yasuyo Yoshizawa's Master Fencer (JPN) arrived in Chicago at approximately 1:45 p.m Monday and began his mandatory 42 hours of quarantine. Trained by Koichi Tsunoda, Master Fencer finished fourth in the Hyacinth Stakes prior to a fast-closing runner-up finish in the Fukuryu Stakes at Nakayama.

"He's typically in the mid-pack during his best performances," said Japan-based Kentucky Derby representative Kate Hunter. "The Hyacinth starts on the turf which can throw some off and he was closing fast in that race and the Fukuryu Stakes, too. He's run second on the turf in his debut, stalking the pace."

Master Fencer is expected to train at Keeneland Friday. 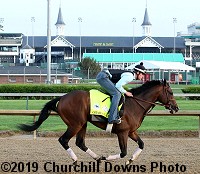 OMAHA BEACH – Fox Hill Farm's Omaha Beach galloped a mile and half under exercise rider Taylor Cambra and the watchful eyes of trainer Richard Mandella. Winner of the Arkansas Derby (G1) in his most recent start and the likely Kentucky Derby morning-line favorite, Omaha Beach is scheduled to work Friday morning with jockey Mike Smith aboard.

Omaha Beach will mark the seventh Derby starter for Mandella, whose first Derby was in 1984 with Bedouin. "That was pretty optimistic," Mandella said looking back on the 15th-place finish behind Swale. "Bedouin loved the mud, but Churchill Downs doesn't stay muddy for more than two hours. By the time he ran, there wasn't much mud left."

That Derby made quite the impression on Mandella. "I remember what a big deal it was and all the excitement," Mandella said. "They were not paying attention to us."

Ironically, two other Hall of Famers in addition to Mandella had their Derby debuts in 1984 and both will be represented in this year's Run for the Roses. Bill Mott, who will saddle Country House and Tacitus next Saturday, finished 13th in the 1984 Derby with Taylor's Special while Shug McGaughey's initial Derby foray netted a sixth-place finish from Pine Circle and a 16th from Vanlandingham. McGaughey will saddle Code of Honor in this year's Derby.

PLUS QUE PARFAIT – UAE Derby (G2) winner Plus Que Parfait galloped about 1 1/2 miles with exercise rider Tom Molloy aboard Wednesday morning at Churchill Downs. Owned by Imperial Racing, Plus Que Parfait broke his maiden on Oct. 7 at Keeneland and finished second in the Nov. 24 Kentucky Jockey Club (G2) at Churchill Downs. The Point of Entry ridgling began his 3-year-old campaign with a fifth-place effort in the LeComte Stakes (G3) and an enigmatic 13th in the Risen Star (G2) at Fair Grounds.

"I don't want to say he really surprised us when he got out to Dubai and did so well because he's always been a good horse," trainer Brendan Walsh said. "I think the Risen Star was the only race he really didn't run well in. He definitely proved it to us on multiple occasions that he fits in this year's Derby field."

TAX – Wither Stakes (G3) winner and Wood Memorial (G2) runner-up Tax is scheduled to breeze at Belmont Park Thursday, according to the NYRA publicity department. Trained by Louisville native Danny Gargan, Tax is scheduled to arrive at Churchill Downs Monday and will be based in Barn 39.

WAR OF WILL – Gary Barber's Risen Star Stakes (G2) winner War of Will arrived at Churchill Downs at 12:30 p.m. Tuesday and galloped during the 7:30 a.m. Derby training session Wednesday. Trained by Mark Casse, War of Will is tentatively scheduled to breeze on Saturday. Casse is expected to arrive to Louisville Thursday afternoon and be at the track Friday.

SIGNALMAN (No. 22) – Kentucky Jockey Club (G2) winner and Blue Grass (G2) third Signalman galloped about 1 1/2 miles Wednesday morning with exercise rider Danny Ramsey in the saddle. Ramsey, a veteran exercise rider, has noticed some vast similarities between Signalman and his grand-sire Sky Mesa. "I first got on Signalman at Saratoga as a 2-year-old," Ramsey said. "The first time I jumped off him I told Kenny 'this horse moves exactly like Sky Mesa.' I was unsure of the pedigree but I knew Sky Mesa very well. I used to gallop him all of the time. We went into Kenny's office and, sure enough, Signlaman had Sky Mesa in his pedigree. They move exactly the same way across the track. It will be great if we can get into the Derby but sometimes the best 3-year-olds don't always make the field."

Signalman is a massive son of General Quarters out of the Trippi mare Trip South. "He's a cool horse to look at," trainer Kenny McPeek said. "He's about 17 hands and has really filled out well."

CHAMPAGNE ANYONE – Six Column Stables and Randy Bloch's Gulfstream Park Oaks (G2) winner Champagne Anyone had a scheduled walk day at trainer Ian Wilkes' barn. The daughter of 2007 Kentucky Derby winner Street Sense has had one very interested on-looker to her training in Carl Nafzger, who trained Street Sense with Wilkes as his assistant. Nafzger was on hand Monday when Champagne Anyone worked five furlongs in :59.80.

"It is an absolute pleasure watching good horses train and I see that brilliance with (Champagne Anyone)," Nafzger said. "The way she floats over this racetrack is unbelievable. She just moves so effortlessly. You can tell the really special horses from the other ones. The impressive part about her work the other morning wasn't her time, it was how she just floated over the ground.

"She doesn't remind me too much of Street Sense. Actually, her mind is a little better than Street Sense was at this stage. He always used to be a little bit more aggressive in the morning. She seems a little bit more put together. They also had very different running styles as well. He would always make that one long run and that's why I think Calvin (Borel) suited him so well. Even though Unbridled isn't in the pedigree she actually reminds me more of him than Street Sense. It's funny how similarly they move over this track." Nafzger also trained Unbridled, the winner of the 1990 Kentucky Derby.

"It's just so awesome to be out on the track during the special training time," said Carroll, whose husband, David, is the assistant to Casse's string at Keeneland and son, Declan, is a locally based jockey. "It was just so quiet on the track and all eyes are on you. It's a really cool feeling." Casse expects Chocolate Kisses to breeze Friday with jockey Julien Leparoux aboard.

LIORA – Coffeepot Stables' Fair Grounds Oaks runner-up Liora visited the paddock and galloped about 1 1/2 miles Wednesday with exercise rider Victor Garcia up. Once again, trainer Wayne Catalano was on FaceTime with assistant Taylor Johnson who was on site at Churchill Downs.

"Look how good she looks," said Catalano to Johnson. "Just have her jog off nice and easy with the pony, head to the paddock, then regular gallop. I can't wait to get back to town and see her." Catalano is scheduled to arrive at Churchill Downs Thursday.

OUT FOR A SPIN – The filly, who was the surprise winner of the Ashland (G1) at Keeneland on April 6 for Commonwealth Stable, was out for a spin with exercise rider Emerson Chavez around the Churchill Downs track on Wednesday. "She is doing everything well," trainer Dallas Stewart said. "With the weather forecast calling for rain on Thursday, she'll work Friday for the Oaks."

Out for a Spin, who's won two of her three starts this year, will have Irad Ortiz Jr. aboard in the Oaks.

SERENGETI EMPRESS – The morning after the final workout for Joel Politi's filly before the May 3 Kentucky Oaks (G1), all was well in trainer Tom Amoss' barn at Churchill Downs. "It's a go in this race," Amoss said, "with lots of confidence. She came out of the workout in good shape. She ate all of her dinner last night, and she's bouncy this morning. So I think she's ready to perform."

After Tuesday's five-furlong workout, Serengeti Empress just walked the shedrow on Wednesday, and Amoss said she'll have a light day on the track on Thursday, probably just jog.

In the March 23 Fair Grounds Oaks (G2), Serengeti Empress bled for the first time while in Amoss' care. The heavy race favorite had to be vanned off. Tuesday's workout was designed to simulate race conditions, including a big push in the final furlong.

"A lot of horses can look good in practice, just like a lot of human athletes can look good in practice," said Amoss. "When you put them in real conditions, in a real setting, human or equine, you see something different from those athletes. That's what makes things exciting. We kid around and say that Serengeti Empress breathes different air from the rest of the horses," Amoss continued. "And when she's right, she's really right and so hard to beat."

STREET BAND – Larry Jones, Cindy Jones and Ray Francis' Street Band visited the paddock and then galloped a mile under exercise rider Jorge Nava. "We kept it light the first day back to the track (following a Monday work)," said Corey York, assistant to trainer Larry Jones. Street Band is scheduled to have her final work for the Oaks Sunday.

ALSO ELIGIBLES DUNBAR ROAD (No. 16) – While she is training well for a possible run in the May 3 Kentucky Oaks, Peter M. Brant's filly is only going to make the field with some defections. Dunbar Road, who finished second as the favorite in the Gulfstream Park Oaks (G2) in just her second career start, is 16th on the Kentucky Oaks points leaderboard, but only the top 14 will enter the starting gate. "She looked pretty good, she trained really well," said Baldo Hernandez, assistant to trainer Chad Brown. "She had her normal gallop, a mile and three-eighths."