It was muddy again this morning at Churchill Downs as the Kentucky Derby and Oaks contenders continue to work towards the big races. Oaks contenders Out for a Spin worked a half-mile over the sealed and muddy track in :49.80, the 12th fastest of 21 at the distance.

At Belmont Park, Shadwell Stable's Haikal worked five furlongs in 1:01.21 on the main track to the satisfaction of trainer Kiaran McLaughlin. Haikal is scheduled to van to Louisville with a Monday arrival with McLaughlin due in the following day.

Also at Belmont Park, Tax worked a half-mile in :47.80 on the dirt training track for trainer Danny Gargan. That move was the fastest of 46 over that surface for the distance. Tax is scheduled to arrive at Churchill Downs Monday.

At Keeneland, Kentucky Oaks contender Jaywalk worked five furlongs in :59.20 and galloped out six furlongs in 1:12.60 with exercise rider Lucas Berticelli aboard for trainer John Servis. The work was the fastest of 12 at the distance over a fast track. "We moved the work up a day because of the weather and I missed it," Servis said from Philadelphia. "I will get there to watch her walk tomorrow. She will come over to Churchill Sunday, leaving around noon after training."

Scheduled to work Friday at Churchill Downs, depending on weather are Omaha Beach for the Derby and Chocolate Kisses, Motion Emotion and Liora for the Oaks.

BY MY STANDARDS – Trainer Bret Calhoun returned from the OBS sale Wednesday and was at Churchill Downs Thursday to watch Louisiana Derby (G2) winner By My Standards gallop 1 1/2 miles over the muddy surface. "I'm glad to be back in town," Calhoun said. "We did well at the sale, so far, and now it's time to get back to business for the Derby." By My Standards is expected to have his final breeze for the Kentucky Derby this weekend.

CODE OF HONOR – William S. Farish's Code of Honor galloped an easy mile at 6:15 under exercise rider Brian Duggan for trainer Shug McGaughey. It was the first day on track for Code of Honor who arrived here from Keeneland early Wednesday afternoon.

COUNTRY HOUSE / TACITUS – Trainer Bill Mott's Derby duo of Country House and Tacitus visited the paddock and then galloped a mile and a half. He said both horses probably would work Sunday. Juan Quintero was aboard Tacitus, the leading point-getter on the Road to the Kentucky Derby Leaderboard, who will be ridden by Jose Ortiz in the Derby. Marianne Scherer was aboard Country House, who will be ridden in the Derby by Flavien Prat.

"I have ridden him a couple of times," Mott said of Prat. "He has done very well in California and people I have talked to say he is a very good rider." Prat is scheduled to arrive in Louisville Wednesday night.

"We galloped about a mile-and-a-half, took it easy," said Jimmy Barnes, assistant to trainer Bob Baffert, who's expected back in Louisville on Friday. "He'll probably work on Sunday. I couldn't be happier with the way he's looking."

Improbable's Derby stablemates, Game Winner and Roadster, are expected to arrive from Southern California on Saturday, April 27. Irad Ortiz Jr. will ride Improbable in the Derby.

LONG RANGE TODDY – Accompanied to the track by Hall of Fame trainer Steve Asmussen's longtime assistant Scott Blasi, Rebel Stakes (G2) winner Long Range Toddy galloped about 1 3/8 miles Thursday at Churchill Downs. Veteran jockey Jon Court has been named to ride in the Derby. The 58-year-old journeyman will ride at Oaklawn Saturday and plans to be on the backstretch Tuesday morning, according to his agent Steve Krajcir.

MASTER FENCER – Katsumi and Yasuyo Yoshizawa's Master Fencer (JPN) cleared quarantine in Chicago at 11 a.m. and is scheduled to arrive at Keeneland at approximately 6 p.m., according to Kentucky Derby Japan-based representative Kate Hunter.

OMAHA BEACH – Fox Hill Farm's Omaha Beach galloped a mile over a sealed track with exercise rider Taylor Cambra aboard for trainer Richard Mandella. Omaha Beach is tentatively scheduled to work Friday, but that could change with rain forecast to begin Thursday afternoon and continuing in to Friday morning.

"I just want to keep him happy and healthy," Mandella said. "I would prefer the track harrowed and not floated (like it was this morning). I will wait until I get the track I want and it could be Saturday or Sunday."

"This is the best time of the year," assistant trainer Allen Hardy said. "I guess I'm the 'New Norm (Casse)' or 'New Nick (Tomlinson)' following them as assistant for the Churchill string. I've worked for Mark for about eight years now. I was actually the foreman with Norm for a while and had some of Mark's other strings until this year. It's a great time of the year to be at Churchill and I'm really excited to be part of the process."

Casse is scheduled to arrive at Churchill Downs Friday and War of Will is slated to breeze Saturday.

WIN WIN WIN – Live Oak Plantation's Win Win Win walked the shedrow at Barn 43 after arriving at Churchill Downs at 5:15 this morning following an overnight van ride from Maryland. Trainer Michael Trombetta, scheduled to arrive in Louisville Saturday, said Win Win Win would train the next two mornings and work Sunday with jockey Julian Pimentel expected to be here for the breeze.

SIGNALMAN (No. 22) – Kentucky Jockey Club (G2) winner and Blue Grass (G2) third Signalman didn't appear to mind the overnight rain, which resulted in the track being sealed during the 7:30-7:45 a.m. training window for Kentucky Derby and Oaks horses. "Everybody galloped fine this morning," said Greg Geier, an assistant to trainer Kenny McPeek, as the colt got a bath following his trip to the track.

Regular exercise rider Danny Ramsey had both Signalman and the filly Restless Rider out. Signalman, who's on the Derby bubble on the points leaderboard, breezed five furlongs in :59.60 last Saturday. "They're on the right road, they're doing everything they're being asked to do, the rest is in the jock's hands," said Ramsey. "Both of my horses love an off track, Signalman and Restless Rider, so really it's all in the jock's hands." Ramsey says the Churchill racing surface is good, whether wet or dry. "I've been riding horses since 1960, and this track when it rains is fine. This track is beautiful to work on, and I've been on tracks in England, in Dubai, all over."

SUENO (NO. 23) – Silverton Hill's Sueno, who will need three defections from among the probable Derby starters, had a walk day at trainer Keith Desormeaux's barn. "We are acting like we are going to get in," said Julie Clark, assistant to Desormeaux.

LIORA – Trainer Wayne Catalano pulled into the Churchill Downs stable gate at 5 a.m. and was "raring to go" after his four-day stint in Chicago to watch Fair Grounds Oaks (G2) runner-up Liora train. Owned by Coffee Pot Stables, Liora, once again, visited the paddock and galloped about 1 1/2 miles with Victor Garcia on board. "I'm watching the weather now to see when we can breeze her," Catalano said. "We'll try to work (Friday) but we'll see how the track looks in the morning. I want a fast surface to breeze on and time is starting to run out."

MOTION EMOTION – Mark DeDomenico's Motion Emotion jogged a half-mile and then galloped a mile and a half under exercise rider Raul Vizcarrondo. Trained by Tom Van Berg, Motion Emotion is scheduled to work Friday morning. 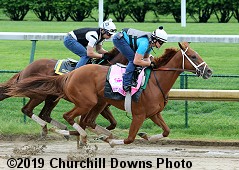 OUT FOR A SPIN – Commonwealth Stables' Ashland (G1) winner Out for a Spin breezed a half-mile in :49.80 outside of recent fourth-place allowance finisher Broadway Cat Thursday morning at Churchill Downs.

Watching from Section 322 in the grandstand, Dallas Stewart said the work was, "perfect" to his riders over the radio.

Out for a Spin will be ridden by Irad Ortiz Jr. in the Kentucky Oaks.

SERENGETI EMPRESS – The filly, who races in the colors of owner Joel Politi, continues to train well towards the May 3 Kentucky Oaks (G1), despite Serengeti Empress' bleeding episode as the heavy favorite in the March 23 Fair Grounds Oaks STREET BAND – Larry Jones, Cindy Jones and Ray Francis' Street Band visited the starting gate and then galloped three-quarters of a mile under Jorge Nava. "This was probably the best day she has had here," said Corey York, assistant to trainer Larry Jones. "She was perfect in the gate." Winner of the Fair Grounds Oaks ALSO ELIGIBLES

DUNBAR ROAD (No. 16) – Trainer Chad Brown was at his barn at Churchill Downs on Thursday, where he has 18 horses stabled for the start of the Spring Meet, which opens Saturday. He watched Dunbar Road take to the track Thursday as Peter Brant's filly trains for a possible run in the May 3 Kentucky Oaks (G1). Dunbar Road, who finished second as the favorite in the Gulfstream Park Oaks (G2) in just her second career start, is 16th on the Kentucky Oaks points leaderboard, but only the top 14 will enter the starting gate. Jose Ortiz is expected to ride her if she makes it into the Oaks. "She looks great," said Brown after her session under exercise rider Kriss Bon. "We're in that unfortunate situation that we are going to need several defections to get in. We're holding out hope, and I'm going to train her as if she is going to run." No plans have been made, should she not make the Oaks field. "We'll remain optimistic that she'll get in," said Brown, who noted that they might have to aim her for the Black Eyed Susan (G2) at Pimlico on May 17, if the Oaks is out of the picture.