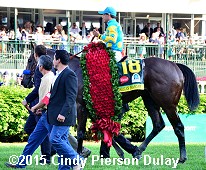 The rose garland for the Kentucky Derby winner first appeared in 1896 when Ben Brush was given a floral arrangement of white and pink roses for winning and in 1904 the red rose became the official flower of the Kentucky Derby. The current form of the garland was first introduced in 1932 for the 58th running won by Burgoo King.

Bill Corum, sports columnist for the New York Evening Journal, coined the term Run for the Roses for the Kentucky Derby in 1926, which is still used to this day. Ironically he became the president of Churchill Downs in 1949 after Matt Winn, president of the track for 47 years, passed away.

Each year, a garland of over 400 red roses is sewn into a green satin backing with the seal of the Commonwealth on one end and the twin spires and number of the running on the other. Each garland is also topped with a Crown of roses, green fern and ribbon. There is a single rose pointing upward in the center of the Crown which is said to be symbolic of the struggle and heart necessary to reach the winners circle. 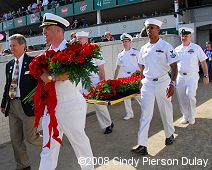 In addition to the garland, the winning jockey also receives a large bouquet containing 60 long stemmed roses wrapped in ten yards of ribbon. There are also 5 gigantic urns in the winners circle filled with dozens of long stemmed roses. The track workers and media are allowed to take the roses from these urns for themselves after the winner's circle festivities are over.

In the past, owners of the Derby winner also received a silk replica of the garland, but since 1996 the actual garland has been freeze-dried and mounted instead. Some owners have even had flowers dipped in silver like the one from Gato del Sol's garland in 1982 which is on display in the Kentucky Derby Museum.

Since 1967, the Kroger Company has been the official florist of the Kentucky Derby, Prior to them, Kingsley Walker Florists made the rose garlands. Each year Kroger constructs the garland in one of its local Louisville stores on Kentucky Derby Eve and the public is invited to watch, If you go, you can even get petals from the roses used as a souvenir and view a replica Kentucky Derby trophy and garland up close. One of the stores in the Louisiville area is selected to make the garland each year, recently the one on Shelbyville Road in Middletown. The same store also constructs the Kentucky Oaks garland of Stargazer Lilies. You can watch a video of them working on one here.