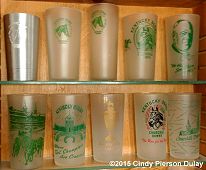 Almost everyone who attends the Kentucky Derby winds up taking home one or more of the souvenir glasses in which they serve the mint juleps. They are a fun item you can either display in your curio or keep in your cabinet and enjoy your favorite beverage from year-round. Many people get the bug and decide to try and complete a set for each year they have attended, each year since they were born, or even a full set of every year they have been produced. The search for the older glasses can be fun as you ramble through yard sales and flea markets looking for that elusive year you are missing.

The first glass produced was in 1938 but it was only used for in limited numbers and was a water glass and not a julep glass so many collectors don't consider it a proper part of a full set of glasses. The next two years a true julep glass was produced for general distribution and these are the most valuable of the set ranging from $6,000 to $16,000 in value depending on the condition and variation. There are not many of these glasses in existence so finding them (much less affording them) is a tough task.

World War II made glass hard to find so the next few years so other tumblers found in surplus stock were used to make an aluminum version for 1940 and 1941 and a bakelite version for 1941 to 1944. The bakelite or Beetleware glasses are also very valuable and a mint condition glass goes for $2500 and up depending on the color. 1945 saw a return to glass but again a low supply of blanks yielded 3 different glasses, a tall frosted, short frosted, and a jigger or juice glass.

For some reason, only blank undecorated glasses were used in 1946 and 1947. This creates a gap in the set as most collectors do not recognize any glasses for these years. Since the blank glasses used were in production until the 1970s, it is virtually impossible to verify if a particular glass was actually used at the Derby.

In 1948 the current run of glasses started that has continued until the present. There have been a few variations of style but most feature a list of winners on the back which makes dating a glass easy; just add one to the last year listed. Beware that there are many unofficial glasses out there that are not even close to worth what the official ones are. A good photo reference of what the official glasses looks like is very important. You can view photos of most glasses online at the Equillector Kentucky Derby Julep Index but you probably should get a book to carry with you. The Kentucky Derby Glasses Price Guide is put out by Eclipse Press (see review for 2008 edition) which is perfect since it shows all the glasses and shot glasses available and some pricing guidelines. For a more accurate gauge of prices though, you need to check the Equillector online price guide which uses prices from actual sales, including on eBay, to give a realistic range of what the glasses are actually bringing.

Good luck in your hunt to build a set of Derby glasses!