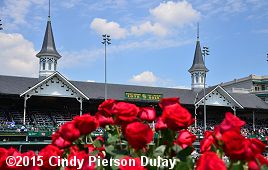 The Twin Spires are one of the most recognizable landmarks in horse racing. For every racing fan they are the iconic symbol of Churchill Downs and the Kentucky Derby. They are such a famous landmark that they are always included in the logo for Churchill Downs Inc. and have even been trademarked.

The Spires were designed by a 24-year-old draftsman, Joseph Dominic Baldez, who was asked to draw the plans for Churchill Downs' new grandstand, which was built in 1895. At first the plans did not include the Twin Spires, but as Baldez continued to work on his design, he felt the structure needed something to make it stand out, and thus the spires were born. This new grandstand was only 250 feet long and was built of brick, which has since been painted white, along with stone and steel. The seating capacity was 4500 and there were large staircases in the front that could hold 1500 standing fans. The staircases have long since been removed during remodels, but the old building with the Twin Spires remains despite having additions made on each side.

A photo of this original grandstand can be seen in this article. 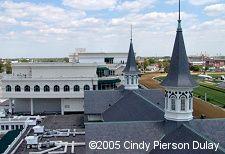 Described as towers in the original drawing, the hexagonal spires are a perfect example of late nineteenth century architecture design, where symmetry and balance were considered more important than functionality. Although Baldez designed lots of other buildings in Louisville, the Twin Spires remain the crowning achievement of his career. Former Churchill Downs President Matt J. Winn is reported to have told Baldez, "Joe, when you die there's one monument that will never be taken down, the Twin Spires."

Baldez died in 1957, but over a century after they were built his Twin Spires still overlook the stretch at Churchill Downs. These days, the Twin Spires dont stand out as much as they used to, with new additions overshadowing them. In 2005, construction of a new expansion to the Churchill Downs clubhouse and grandstand was completed, pushing both to new towering heights. The Twin Spires were left alone, nestled between the new monoliths on each side. In 2009, Churchill Downs installed lights to allow night racing, but at least these are spaced enough so you can still see the Spires without an obstruction,

The Twin Spires always remain lit over night making them an inspiring sight. In recent years, Kentucky Oaks day has become a pink-out day for breast cancer support and the windows of the spires are covered in pink for that day.