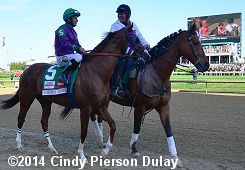 Every year when the horses come out on the track for the post parade for the Kentucky Derby at Churchill Downs, the University of Louisville Marching Band plays the Stephen Foster classic My Old Kentucky Home and the crowd sings along. It is a very inspiring sound to have over 150,000 people singing along to the words shown on the big televisions.

Although the history of the playing of the Stephen Foster ballad on Kentucky Derby Day is uncertain, 1921 is believed to be the first year. The May 8, 1921, Louisville Courier-Journal reported, "To the strains of My Old Kentucky Home, Kentuckians gave vent their delight. For Kentucky triumphed in the Derby" in its coverage of Kentucky-owned and bred Behave Yourself winning the race.

It is not even certain which year it was first played as the horses were led onto the track for the Derby post parade. A 1929 news account written by the legendary Damon Runyon reported that the song was played periodically throughout Kentucky Derby Day. A report by the former Philadelphia Public Ledger provides evidence that 1930 may have been the first year the song was played as the horses were led to the post parade - "When the horses began to leave the paddock and the song My Old Kentucky Home was coming from the radio, the cheering started."

So you can carry on the same tradition at home, here are the lyrics for My Old Kentucky Home by Stephen Foster: 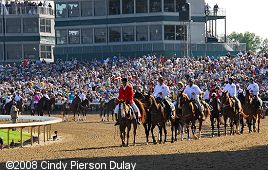 Official sing-a-long video with Kentucky Derby scenes and lyrics from KentuckyDerby.com
Fan video of the crowd singing along. The actual song starts about halfway through