It was another nice morning at Churchill Downs today for the Kentucky Derby (G1) and two Kentucky Oaks (G1) contenders to train.

Tom Amoss trained Serengeti Empress breezed 5 furlongs in company over a fast track with Tyler Gaffalione aboard in 58:20 for a bullet work. This makes her more likely to start in the Kentucky Oaks.

Anothertwistafate, who is #23 on the points list, will be going home to Golden Gate to train for the Preakness. He would have needed 3 horses to drop out to get in the Kentucky Derby.

COUNTRY HOUSE / TACITUS – Trainer Bill Mott had his two Kentucky Derby hopefuls on the track during the special 7:30-7:45 (all times Eastern) training window for Kentucky Derby and Kentucky Oaks horses. Mrs. J.V. Shields, E.J.M. McFadden Jr. and LNJ Foxwoods' Country House visited the starting gate and then galloped a mile and half with exercise rider Marianne Scherer aboard.

No rider has been confirmed for Country House, who was third in the Arkansas Derby (G1) in his most recent start. "We are shopping around for a rider," Mott said. "For right now it is Jockey No Boy."

Juddmonte Farms' Tacitus, who worked a half-mile in :50 on Monday, also visited the starting gate and then jogged a mile under exercise rider Juan Quintero with Mott alongside on his pony.

Mott also was pleased about Monday's announcement that Royal Delta had been elected to the National Museum of Racing Hall of Fame. "She was good and you tend to forget how good they were," Mott said of Royal Delta, a six-time Grade I winner who captured the first of her two Breeders' Cup Ladies Classics (G1) at Churchill Downs. "That (the Hall of Fame induction in August) will be fun."

IMPROBABLE – A day after trainer Bob Baffert supervised a half-mile work at Churchill Downs, the colt who races for WinStar Farm and China Horse Club International and Starlight Racing had a quiet morning, walking the shedrow. Improbable, the Arkansas Derby (G1) and Rebel (G2) runner-up, had worked four furlongs on a fast racing surface, with regular exercise rider Jose Contreras up, in 48 seconds flat on Monday. Assistant trainer Jimmy Barnes said, "All is well; we're very pleased with everything."

Barnes said there's no decision on when Improbable's Derby stablemates, Game Winner and Roadster, will arrive from Southern California. Baffert had said they were probably coming in April 24 or April 27.

MASTER FENCER – Katsumi and Yasuyo Yoshizawa's Master Fencer (JPN) was scheduled to arrive in Chicago at 1:30 p.m. CDT, according to Japan Road to the Kentucky Derby representative Kate Hunter. Master Fencer will quarantine for a minimum of 42 hours in Chicago, then arrive at Keeneland Thursday and train Friday.

OMAHA BEACH – Fox Hill Farm's Omaha Beach galloped a mile and a half under Taylor Cambra during the special Derby/Oaks training window. Trainer Richard Mandella said Omaha Beach "probably would work Friday" when jockey Mike Smith is scheduled to be in town. Smith has ridden Omaha Beach to victories in a division of the Rebel (G2) and the Arkansas Derby (G1).

PLUS QUE PARFAIT – UAE Derby (G2) winner Plus Que Parfait jogged in the chute, then had a light one-mile gallop Tuesday morning at Churchill Downs. Plus Que Parfait was once again ridden by trainer Brendan Walsh's assistant Tom Molloy.

WAR OF WILL – Gary Barber's Risen Star Stakes (G2) winner War of Will arrived at Churchill Downs at 12:30 p.m. Tuesday to begin his major preparation for the Kentucky Derby. Trained by Mark Casse, War of Will is stabled in Barn 36.

Next up in order of preference: Bodexpress (undecided), Signalman (Brian Hernandez Jr.), and Sueno (undecided) and Bourbon War (undecided).

CHAMPAGNE ANYONE – Six Column Stables and Randy Bloch's Champagne Anyone visited the starting gate and jogged once around the main track under exercise rider Kara Lee for trainer Ian Wilkes. Winner of the Gulfstream Park Oaks (G2) in her most recent start, Champagne Anyone had worked five furlongs in :59.80 on Monday.

LIORA – Coffeepot Stables' Fair Grounds Oaks runner-up Liora galloped about 1 1/2 miles Tuesday with exercise rider Victor Garcia up. Even though trainer Wayne Catalano was more than 300 miles away in Chicago, he followed along closely with her training through FaceTime via his assistant Taylor Johnson at Churchill Downs. "She looked great – I can't wait to see her when I get back in town," Catalano said. "I haven't been able to even celebrate my wife's birthday that was in October. I took a couple of days, flew back to Chicago and got our barn ready up here as well."

OUT FOR A SPIN – After Commonwealth Stable's filly was a surprising 52-1 winner of the Ashland (G1) at Keeneland on April 6, trainer Dallas Stewart said everything has been very routine in the way she came out of the race as she trains for the May 3 Kentucky Oaks. "She had her normal gallop and grazing, and she's looking great," said Stewart of the filly, a $75,000 yearling purchase at the September 2017 Keeneland sale, who ranks fifth in the points standings. Emerson Chavez is the regular exercise rider of Out for a Spin, who's won two of her three starts this season, while Irad Ortiz Jr. will get the mount in the Oaks. 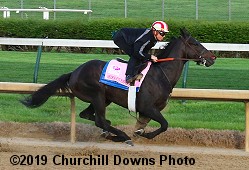 SERENGETI EMPRESS – The connections to Joel Politi's filly could breathe a little easier after her workout at Churchill Downs on Tuesday with jockey Tyler Gaffalione. A post-workout examination revealed no lingering problems from the March 23 incident at the Fair Grounds in New Orleans, in which she bled. "She bled through the nostrils after the Fair Grounds Oaks (G2)," said trainer Tom Amoss outside his barn, minutes after an endoscopic exam showed her lungs following a five-furlong workout were clear.

"I'm happy to report she's perfectly clean," said Louisville equine veterinarian Dr. Kevin Dunlavy. "Couldn't have scoped any better. I told Tom that I was really pleased, that in light of today's workout, that was all we could ask for. I'm very pleased."

In the Fair Grounds Oaks, Serengeti Empress was the heavy favorite. In that race, she did receive Lasix before the race, and Amoss plans to have the medication administered to her before the Kentucky Oaks. "Certainly her short-term racing career was on hold," following the Fair Grounds race, in which she finished seventh and had to be vanned off. "We've worked her twice at Churchill Downs. We really let her exert today, to see if she bled. And she did not. That's really good news. "It's important to note that she had never bled before the Fair Grounds Oaks, for us," Amoss continued. "So we're hoping that it was just one of those things. Maybe we didn't pick up that she wasn't feeling good that day or something like that. But today's effort which was extremely good, and the scope afterward, has us feeling really good about being able to run in the Kentucky Oaks – which is our plan if she's feeling good tomorrow."

Amoss was very impressed with the way Serengeti Empress worked the final eighth of a mile Tuesday. "I feel certain that the so-called experts will call that last eighth of a mile a real 'wow.' It was a real wow to me, and I've been doing this for 30-plus years," he said.

So far, Amoss said, there's no decision on who will ride her in the Oaks.

STREET BAND – Larry Jones, Cindy Jones and Ray Francis' homebred Street Band walked the shedrow at Larry Jones' barn a day after working five furlongs in 1:00.40 under jockey Sophie Doyle. She is scheduled to return to the track Wednesday morning.

ALSO ELIGIBLES – Arriving for a possible run in the May 3 Kentucky Oaks, Peter M. Brant's filly, Dunbar Road, was out on the track for a light workout. "She should be in good shape, so far so good," said Baldo Hernandez, assistant to trainer Chad Brown. "She jogged, once around on the track. She's doing everything the right way, I hope we get in."

Brown will arrive later this week. Dunbar Road, who finished second as the favorite in the Gulfstream Park Oaks (G2) in just her second career start, is 16th on the Oaks points leaderboard, with only the top 14 that pass the entry box.

Also jogging for the Brown barn were Bricks and Mortar, winner of the Pegasus World Cup Turf Invitational (G1) and Newspaperofrecord (IRE), the undefeated winner of last fall's Breeders' Cup Juvenile Fillies Turf (G1) here. Bricks and Mortar is being pointed to the 33rd running of the $1 million Old Forester Turf Classic (G1) on May 4 while Newspaperofrecord is scheduled to use the 35th running of the $250,000 Edgewood (G3) on May 3 as her 2019 debut.