Weather once again affected the Kentucky Derby workouts on Sunday. Although the rain ended Saturday evening, dense fog rolled in and made many trainers, once again, change their workout pattern for their Derby and Oaks contenders.

The fog did not stop UAE Derby (G2) winner Plus Que Parfait, who breezed a half-mile under trainer Brendan Walsh's assistant and exercise rider Tom Malloy. The work did not receive an official time due to the fog hindering the view of the clockers.

The National Weather Service calls for temperatures in the low 50s and clear skies Monday morning for training with highs progressing into the 70s.

BY MY STANDARDS – Chester Thomas' Allied Racing Stable's Louisiana Derby (G2) winner By My Standards galloped about 1 1/2 miles at 7:30 a.m. Sunday with exercise rider Simon Camacho aboard. "I keep changing it up but the plan is to work him Monday," trainer Bret Calhoun said. "I was trying to dodge the weather to get a fast track. Then, I had planned on flying to Ocala for the OBS Sale and my flight plans got altered. Now, we'll be able to plan on working Monday." Jockey Gabriel Saez is likely to breeze By My Standards.

COUNTRY HOUSE / TACITUS – Hall of Fame trainer Bill Mott's duo of Arkansas Derby third-place finisher Country House and Wood Memorial winner Tacitus both galloped about 1 1/2 miles Sunday morning during the Derby and Oaks training session. "I think we've got two legitimate horses for the Kentucky Derby," Mott said. "I think both of these horses can get the 10 furlongs with their breeding which knocks out a lot of questions for many horses that enter the Derby. It's easier to find a 10-furlong turf horse than it is a dirt one. You really never know if a horse can get the 1 1/4 until you try it."

Mott's other Derby hope, Country House, only has one victory in six starts but the consistent son of Lookin at Lucky has banked $260,165. "Country House is more of an underdog and hasn't really accomplished as much yet as Tacitus," Mott said. "He keeps knocking at the door and running at the end. He's the type of horse that would benefit from a fact pace in the Derby and hopefully that's the case and he can pick up the pieces." Mott has not confirmed a rider for Country House.

IMPROBABLE – With the weather and track conditions improving, WinStar Farm, China Horse Club and Starlight Racing's Improbable went out for a gallop under exercise rider Jose Contreras when the track reopened following a harrow break. "We galloped today, a mile and a half, he went very nice," said Jimmy Barnes, assistant trainer to Bob Baffert. "The track was in excellent shape – we had a lot of rain yesterday. We're just waiting for Bob to give us further instructions." Improbable, the Arkansas Derby and Rebel runner-up, is expected to breeze at some point this week.

OMAHA BEACH – It was a busy morning at Barn 28 for Hall of Fame trainer Richard Mandella as his Derby hope Omaha Beach returned to the track, but before he did, he was fitted with new shoes from his blacksmith, Ben Craft, who flew into Louisville from Southern California. "He cracked his quarter when he broke his maiden at Santa Anita at least two months ago (Feb. 2)," Mandella said. "That's like breaking your finger nail except that's like breaking your fingernail high on your cuticle. In horses, that's in the coronet band. So, it takes several months to grow down. We patched that and, since then, he's won the Rebel and Arkansas Derby. It's now a little over two months old and was due to be replaced today. So, I brought in my blacksmith, Ben Craft, from California and to reset it today and put new shoes on. Now, we're ready to go."

Omaha Beach galloped about 1 3/8 miles with exercise rider Taylor Cambra aboard at 9:40 a.m. "I'm a little excited, nervous, you name it," Mandella said. "I'm just glad to be here in Louisville." 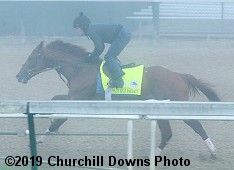 PLUS QUE PARFAIT – UAE Derby (G2) winner Plus Que Parfait worked a half-mile Sunday at 7:30 a.m. for locally-based trainer Brendan Walsh. However, the work did not receive an official time due to the fog hindering the view of the Churchill Downs clockers.

"It was a shame about the fog," Walsh said. "I had one of my assistants on the phone at the half-mile pole to warn me on the frontside and I had him in :49.40. It was exactly what I wanted." Plus Que Parfait is stabled in Barn 9.

ALSO ELIGIBLES – Currently on the outside looking in at No. 22 on the Kentucky Derby preference list, Signalman was reported to be in "great shape" Sunday morning from trainer Kenny McPeek's assistant Greg Geier following his five-furlong breeze in :59.60 Saturday. The colt had a scheduled walk day.

Peter Redekop B.C. Ltd.'s Kentucky-bred colt, Anothertwistafate, trained by Blaine Wright, was on the track Sunday morning with exercise rider Jose Silva. The colt emerged in good shape after finishing second to upset winner Owendale in the Lexington (G3) at Keeneland on April 13. "He was out for just a gallop," said exercise rider Silva afterwards. "The track was a little wet, but not too much."

Silverton Hill LLC's Sueno, who finished third in the Lexington in his last start, was out on the track with exercise rider Juan Diaz. "He had a nice, easy gallop after walking a couple of days," said Julie Clark, assistant to trainer Keith Desormeaux. "He's a real calm, quiet horse, but he seemed a little lively today." Sueno ranks 24th on the Derby points leaderboard, so he's on the outside looking in, and would need four scratches to make the field of 20. "It's a little challenging, and we'd sure like to get there for the owners," Clark said. "We sure don't wish anyone ill will, but we'll see how the chips fall."

CHAMPAGNE ANYONE – Six Column Stables and Randy Bloch's Gulfstream Park Oaks (G2) winner Champagne Anyone had a scheduled walk day on Easter Sunday as trainer Ian Wilkes celebrated the holiday with his family and new grandson Rory. Champagne Anyone is scheduled to breeze Monday with Wilkes' son-in-law Chris Landeros up.

OUT FOR A SPIN – Commonwealth Stable's lightly-raced filly Out for a Spin galloped at 5:15 a.m. for locally-based horseman Dallas Stewart. The filly by Hard Spun will attempt to give 59-year-old Stewart his first win in the Kentucky Oaks since winning the 1 1/8-mile race with Lemons Forever in 2006.

SERENGETI EMPRESS – When the track reopened after a harrow break for Derby and Oaks horses Sunday, Joel Politi's filly was in the group, with exercise rider Francisco Herrera. "She galloped a mile and a half, and she's going to do the same thing tomorrow," said trainer Tom Amoss. "Our plan, weather permitting, is to work Tuesday." Amoss is still evaluating Serengeti Empress, who bled in her previous start, the Fair Grounds Oaks (G2), and whether she'll be entered in the Oaks.

STREET BAND – Fair Grounds Oaks (G2) upset-winner Street Band galloped about 1 1/2 miles at 5:30 a.m. Sunday at Churchill Downs for trainer Larry Jones. "She really likes doing her job and has been training well," assistant Corey York said. "She can be a bit quirky sometimes but she's maturing as she gets older." Street Band is likely to work Monday at 7:30 a.m. with Sophie Doyle aboard, according to York.

Next up in order of preference: Cookie Dough (Jeffrey Sanchez) and Dunbar Road (undecided).