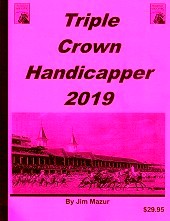 
Progressive Handicapping Inc's Jim Mazur has become well-known over 3 decades as a credible source for winning angles in both the Triple Crown and Breeders' Cup World Championships, using a less conventional "contrarian" approach which has served him well. Recreational bettors from around the world inflating the pari-mutuel pools, as well as large field sizes (up to 20 in the Kentucky Derby) in the main events and the undercards, can lead to higher than expected odds on your selected horses, and hopefully large payouts in the exotic pools. At time of writing there doesn't appear to be an American Pharoah or Justify poised to easily sweep the series, so more than ever Triple Crown Handicapper could be your key to catching a longshot winner.

Rather than looking for the likely winners, Mazur looks for the likely losers, tosses them as "pretenders", and the "last men standing" are the ones who hopefully show up on top. Using statistics from up to 40 years of Triple Crown races, he has come up with several negative angles or "knocks", which can draw from many factors, including best Beyers before the race, number of starts at 2 and 3 (the Apollo "jinx" broken just last year), running style, and pedigree. When the track is fast, the Kentucky Derby historically has favored closers, not just for the win but in all 4 slots of the superfecta, just because in a 20 horse field there's bound to be a hot pace up front that will "hit the wall". But this is never guaranteed; if somehow the pace comes up slow or moderate or the track is wet, that wall doesn't happen and a midpack horse can go on to win. The premise is simple, too many knocks (in this example - a front-running style) mean a horse is less likely to be competitive. The book is a real eye-opener for the fan or casual bettor since it gives such a participant so many different angles to work with to find that elusive "crush" on the big day.

Mazur starts off with a "Stroll Down Memory Lane" where he discusses some selected Triple Crown races from the past 20 years and their significance in the development of his system. He demonstrates the power of his contrarian stance, trying to dig deeper to avoid the obvious factors that most bettors will use, and hopefully come up with a longshot, not necessarily to win but even to hit the board to boost the exotic payouts. He first put the contrarian theory to the test in 1995 and was richly rewarded by ending a 20-year Derby losing streak at the betting windows. This chapter gets amended every few years, the latest being the 2016 Belmont where the system worked great during the undercard until the "bad beat" in the main event to deny him a Pick 6 sweep.

Each of the events (Kentucky Oaks, Derby, Preakness, and Belmont) is given its own 2 chapters (one covering the knocks to use, the other recapping the 2018 edition and the strategies used). Each race is played differently for many reasons, the most obvious being the race distances -- what works in a 20-horse field going around the coffin corners of Churchill Downs at 1 1/4 miles probably won't over 1 1/2 miles of "Big Sandy" Belmont Park with a smaller field and less traffic trouble. Mazur includes numerous charts describing the basis for the various knocks he employs in his handicapping method. The first chart in each chapter lists the last 33 winners (from Ferdinand to Justify), trainer, jockey, post position, win payout, and running time followed by a short paragraph summarizing how the favorites fared.

Although the favorite has won the last 6 Derbies, longshots often fill out the vertical exotics, so Mazur also includes a special section covering the second place finishers, very useful for constructing exacta, trifecta, superfecta, and high-5 tickets, and with the large field, a favorite like 2017 winner Always Dreaming still paid $11.40 to win. More recently, Mazur devised the "Mazur Index" (whose calculation changes by race) highlighting overlaid contenders and weeding out the underlaid "wise guy" horses. In his recap of last year he also goes through how he played the undercard, angles of which are published in a separate publication, Triple Crown Undercard Handicapper, increasing your opportunity to take advantage of the inflated pools and odds in the rich undercard stakes races carded those afternoons, especially in the multi-race (Pick 3-6) bets.

Also included in each chapter are the Daily Racing Form past performances of the last 23 winners and the last 12 Derby runners-up, so you can see where the knocks can be found and know what to look for this year. Earlier editions of the book had extensive charts and tables covering stats for running style, jockey/trainer records, workout details, etc. but these are now given in an online appendix available for separate purchase here. If you enjoy looking for your own winning angles rather than just following Mazur, perhaps you may find a pattern of your own that he didn't cover.

To accompany the Triple Crown Handicapper, Mazur releases The Derby Zone one week before Derby day, likewise the Preakness Zone and Belmont Zone over the same timeframe. These publications, available online only and updated daily on the website, sorts each race's pre-entrants into the three categories of Contenders, Gray Zone, and Pretenders, based on the factors detailed in Triple Crown Handicapper, and calculates the Mazur Indices, with the final update taking into account the post position draw and any late workouts or scratches. Mazur rarely attends Triple Crown events in person but has associates "on the ground" to report back to base any important findings.