The final Saturday of racing at Churchill Downs for 2018 is "Stars of Tomorrow II" day with an all-juveniles card of 12 races. Overnight rains downgraded the main track to sloppy (sealed), with cloudy skies and temperatures in the high 50's during the afternoon. The feature race was the $200,000 Kentucky Jockey Club Stakes (G2) for 2-year-old going 1 1/16 miles on the main track, and a points scoring event on the Road to the Kentucky Derby series. Breeders' Futurity (G1) winner Knicks Go was sent off as the lukewarm 3-1 favorite in the full field of 14 off his runner-up finish in the Breeders' Cup Juvenile (G1). In to challenge him included 7-2 second choice Signalman, 2nd in the Breeders' Futurity and 3rd in the Breeders' Cup Juvenile, and 4-1 third choice King for a Day, a maiden winner last out at Belmont after finishing 2nd in his debut at Saratoga. 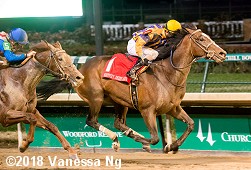 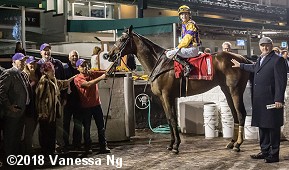 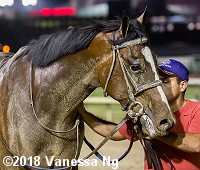 Signalman in the winner's circle. Winning trainer Ken McPeek said, "He was a big, strong horse when he went through the sales ring and today he still is that type of horse. He's taken us a long way so far and it's been a lot of fun. I love the way Brian rode him today; it made up for the (Golden Rod) when we thought we were a cinch (with Restless Rider). This is what we all work for. He'll get a little rest, probably at Payson Park for about a month. Then, we'll ease him back into things and look at races like the Blue Grass down the road. We'll let him tell us but obviously the big one is in May."

Right: Signalman heads back to the barn. Winning jockey Brian Hernandez Jr. said, "This horse always gave me a lot of confidence. We were able to work out the best trip possible in the Breeders' Cup Juvenile from the 14-hole. Today, I was able to get him up into the race early and he really showed what he could do. You're always fortunate to have the horse under you and today we did. Down the lane he was actually looking over at the TV screen. Even with the little quirks he still shows a lot of promise. He'll be exciting down the road." 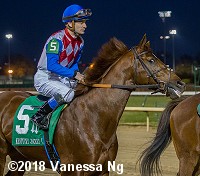 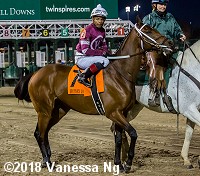 Left: Second place finisher Plus Que Parfait in the post parade. Trainer Brendan Walsh said, "He ran a great race. I'm very excited and pleased with his effort today. We'll have a lot of fun with him down the road. He's just getting going." Jockey Julien Leparoux added, "He ran great. I think he's just going to keep getting better with each start."

Right: Third place finisher Limonite in the post parade. Jockey Ricardo Santana Jr. said, "He just needed a little more distance today. I thought he ran very well today and will improve when the distances get a little longer." 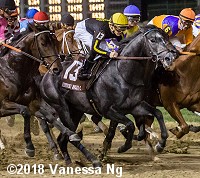 Right: The horses break from the gate for the Kentucky Jockey Club Stakes. 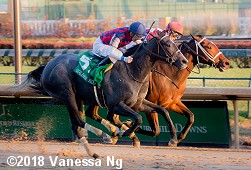 The distaff counterpart to the Kentucky Jockey Club is the $200,000 Golden Rod Stakes (G2) for 2-year-old fillies also going 1 1/16 miles on the sloppy main track, scoring points for the Road to the Kentucky Oaks. Breeders' Cup Juvenile Fillies (G1) runner-up Restless Rider was sent off as the 7-10 favorite in the field of 9. In to challenge her included 5-2 second choice Break Curfew, a debut winner at Belmont last out, and 9-1 third choice Reflect, 9th in the Breeders' Cup Juvenile Fillies.

Jockey Channing Hill sent 27-1 longest shot Liora to the lead first time by and she set fractions of 24.81, 49.68, and 1:14.70 while pressed by Break Curfew and stalked by Restless Rider. Into the stretch, Brian Hernandez Jr. sent Restless Rider up to challenge setting up a duel to the line after 1 mile in 1:39.76. Liora held off Restless Rider by a nose for the gate-to-wire victory in 1:46.25. It was another 2 1/2 lengths back to 26-1 High Regard third.
Full results chart from DRF 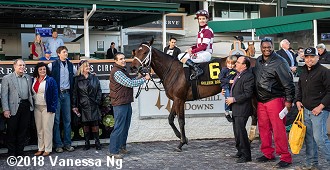 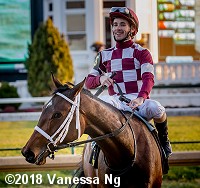 Left: Liora in the winner's circle. Winning trainer Wayne Catalano said, "On paper it was a really tough race. This filly showed a lot of talent training for this race. She's been full circle. We ran her at Saratoga and that didn't really work out. Then, we tried her on the grass and she ran okay but when she broke her maiden she showed her talent. We decided to take the Farrell route and now she's on the Kentucky Oaks trail."

Right: Liora returns after the race. Winning jockey Channing Hill said, "She's an awesome filly. The only real concern from a pace standpoint was Chad Brown's filly (Break Curfew). She had showed a little bit of speed prior. Wayne always tells me to let them break and see what happens. I kept giving her little taps late in the stretch and she kept finding more. She galloped out really well, too." 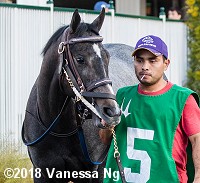 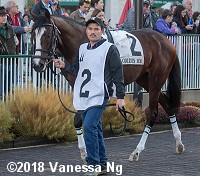 Left: Second place finisher and beaten favorite Restless Rider in the paddock before the race. Gary Geier, assistant to trainer Ken McPeek said, "Brian (Hernandez) thought that (Break Curfew) would show a little bit more pace up front and pressure (Liora). She went really slow up there and controlled her own destiny. We just couldn't get to her down the stretch after going that slow."

Right: Third place finisher High Regard in the paddock. Jockey Corey Lanerie said, "I thought I had a big shot turning for home. She ran really well this afternoon."

The field breaks from the gate for the Golden Rod Stakes.