The 87th renewal of the $400,000 Prince of Wales Stakes, the second jewel in Canada's Triple Crown for 3-year-olds foaled in Canada, was run Tuesday afternoon at Fort Erie Racetrack over a distance of 1 3/16 miles on the main track. Conditions were typical for mid September at the "border oval", with overcast skies and a race time temperature of 19 C (66 F) and the main track originally fast, but rain early in the card quickly downgrading the track to muddy and turf races were taken off. Queen's Plate winning filly Moira was not entered by trainer Kevin Attard and her owners, opting instead to prep for either the E.P. Taylor Stakes (G1) at Woodbine or the Queen Elizabeth II Challenge Cup (G1) at Keeneland, thus denying Canada a Triple Crown winner and extending the drought to 19 years since Wando in 2003.

Jockey Kazushi Kimura sent Ironstone to the lead first time by through fractions of 22.93, 47.41, and 1:11.73 while pressed by Duke of Love and stalked by 48-1 longest shot Collaborative. Sir for Sure sat fourth early but unseated jockey Declan Carroll on the clubhouse turn. Turning for home, jockey Justin Stein sent Duke of Love 4 wide to challenge, gaining a length advantage through 1 mile in 1:37.57. Ironstone attempted to come back but Duke of Love held him off to win by 3/4 length in 1:58.07. It was a long 6 lengths back to 40-1 Ice Road third. 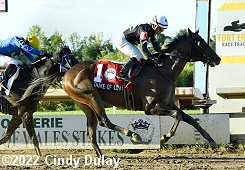 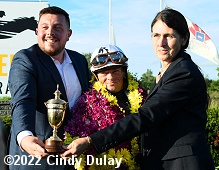 Left: Duke of Love in the winner's circle. Winning trainer Josie Carroll said, "He got the trip today. Justin rode him perfectly. We discussed what we were hoping for. I wanted Justin off the fence where he wasn't going to be squeezed down in there and be in a lot of trouble this time. We wanted him to get a nice clear trip. The horse looked a little bit lost in the lead in the stretch, but Justin kept busy on him and got him home." 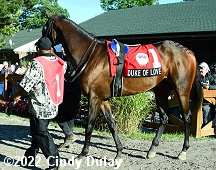 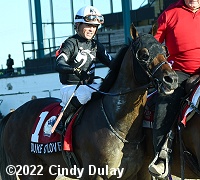 Left: Duke of Love in the paddock before the race. Harry Rice, east coast racing manager for ownership group MyRacehorse said, "It was awesome. We have about 900 owners that are involved with Duke. So, to have the 25 that we have here and see him finally put it together. We always knew he was going to. It was something else. We had people who travelled from all over - Americans, Canadians, and it was just an unbelievable day. Justin gave him a great ride, so it was good."

Right: Duke of Love returns after the race. 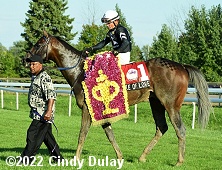 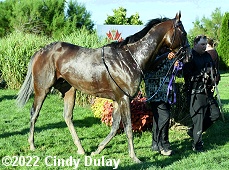 Left: Justin Stein and Duke of Love head to the winner's circle. Stein said, "The Plate was a throw out race in my opinion. Today, when Duke was on the track in post-parade, he had his game face on. He was a lot cooler. His body temperature on Plate Day, he got pretty nervous and warm, a little bit worked up. Today he knew what he was doing. He kept looking back at the gate, like are we going to go? You could just feel his energy was a lot more in tune with what he was supposed to be doing today."

Right: Duke of Love heads back to the barn after the race. 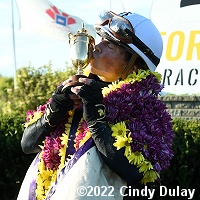 Right: The horses break from the gate for the Prince of Wales Stakes. Stein added, "Duke broke really well. His stride was comfy right away. I wasn't worried about the dirt at all, the way he was traveling over it. We had a nice clean trip on the outside. He got to relax. A track like this, there's even more kickback when it's heavy and wet and sloppy. It makes it a lot easier for horse if they're not thinking about running into the slop. We had a dream trip." 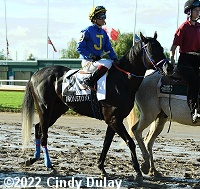 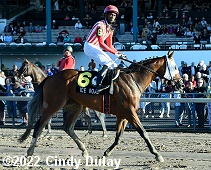 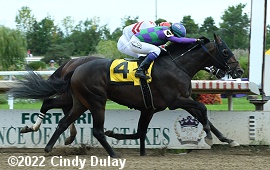 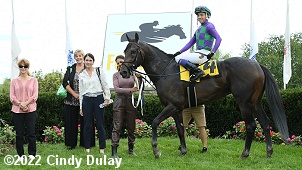 Kicking off the stakes quintet was the $100,000 Lake Erie Stakes featuring a field of five Ontario-sired 3-year-olds sprinting 6 furlongs. Jockey Kazushi Kimura sent 5-2 third choice Uncle Joe to lead out of the chute through a quarter of 22.89 before 15-2 fourth choice Bossy Holiday took over on the turn through a half in 46.00. Kept to task by Luis Contreras, Bossy Holiday held off Uncle Joe to win by a head in 1:10.23. It was a length back to 11-10 favorite Silent Runner third.

Contreras said, "He broke really sharp, and after that he was just fighting the whole way and fought hard in the end." Winning trainer Josie Carroll added, That's what's a lot of fun, training for the Dalos family (owner-breeder Ivan), we've got generational horses and it just makes it very special. It’s an unknown surface up here, but he’s a pretty versatile little horse. I just left it in Luis’ hands. We just got him warmed up and ready to come out.” 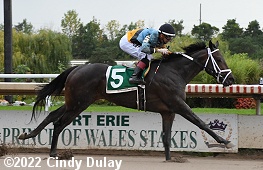 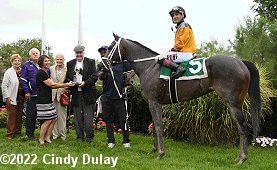 The $100,000 Rondeau Bay Stakes featured a field of seven Ontario-sired 3-year-old fillies also sprinting 6 furlongs on the main track. 19-1 Executive Effect battled with 13-2 American Gamble through opening fractions of 22.70 and 46.23 while stalked by 6-1 third choice Pleasure's Gold. Turning for home, jockey Rafael Hernandez sent Pleasure's Gold to lead through 5f in 58.24. Kept to task by Hernandez, Pleasure's Gold drew clear to win by 2 lengths over late-running 9-10 favorite Souper Flashy in 1:11.23. It was another 1 1/4 length back to American Gamble third.

Winning trainer Tino Attard said, “I didn’t see the break, then I saw she was in last, and I said what’s she doing up there. She should be close to there. Then I saw her coming. She’s got a lot of heart this horse. She’s better and better, every time she runs, she’s always right here. She’s a nice filly. We love her like we love my grandkids.” 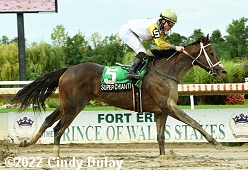 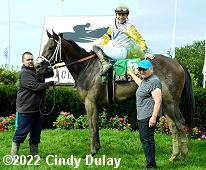 The $30,000 Molson Cup Stakes is restricted to older fillies and mares with at least two Fort Erie starts in 2022, originally scheduled at 1 1/16 miles on the turf but moved to the main track. 11-2 Freret was quickest away through fractions of 23.93, and 47.94 while pressed by 9-5 favorite Princess Halime and stalked by 13-2 Grand Prize. On the far turn Princess Halime gained the lead through 3/4 in 1:13.08 before 6-1 Super Chianti swept to the lead 6 wide through 1 mile in 1:41.26. Kept to task by jockey Emma-Jayne Wilson, Super Chianti drew off late to win by 5 lengths over Grand Prize in 1:48.67. It was a head back to 15-1 Tiz My Right third, while favorite Princess Halime faded late to finish sixth beaten 9 3/4 lengths.

Winning trainer Michaela Neubauer said, "I thought the distance would be fine and she's been training so great. So, we just took the shot." 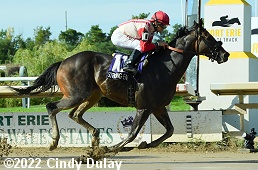 The $30,000 Le Cinquieme Essai Cup Stakes at 6 1/2 furlongs is restricted to older horses who have started at least twice at Fort Erie this year. Jockey Olaf Hernandez sent 3-1 second choice Strong Ending to the lead out of the chute through fraction of 23.17 and 45.70 while pressed by 9-4 favorite Striking Moon and stalked by 13-4 third choice Tycoon. In the stretch Strong Ending continued to lead through 3/4 in 1:10.65, drawing away late to win by 1 1/2 lengths over late-closing 18-1 Letting Loose in 1:17.37. It was a head back to 9-2 fourth choice Dilettante third, and a length more to favorite Striking Moon fourth.

Winning trainer Richard Davis, who claimed the gelding for $5000 at Tampa Bay Downs on February 25 said, "I knew he was a nice horse. I figured he would like it here at Fort Erie, but I wasn't expecting this at all."