On Sunday afternoon, a field of 13 Canadian-foaled 3-year-olds raced 1 1/4 miles over the Tapeta surface at Woodbine in the 163rd running of the $1 million Queen's Plate Stakes, the oldest continuously-run stakes race in North America and the first leg of the OLG Canadian Triple Crown, with a $500,000 bonus should a horse complete the sweep. After light rainshowers in the morning, it was mostly cloudy at the historic track near Pearson International Airport with overcast skies and a high temp of 25 C (77 F).

Rondure was sent off as the 3-2 favorite off his 5 1/2 length win in the Marine Stakes (G3) on July 2. In to challenge him included 9-5 second choice Moira, the lone filly in the race, winner of the Budweiser Woodbine Oaks by 10 lengths on July 24 and taking on maales for the first time, and 11-1 third choice Ironstone, third in his last 3 starts, the Woodstock, Queenston, and Marine Stakes.

Jockey David Moran sent 15-1 The Minkster to the lead first time by and he set fractions of 23.75, 47.58, and 1:11.85 while pressed by Ironstone and stalked by 17-1 Sir for Sure. Turning for home, The Minkster tired allowing Ironstone to inherit the front through 1 mile in 1:36.33. At the 3/16 pole, Moira, as far back as 9th and 8 3/4 lengths off the pace early, swept to the lead with a stunning 4 wide move, quickly taking command by 3 lengths midstretch. Kept to task by Hernandez, Moira powered away to win by 7 lengths over late-running 17-1 Hall of Dreams to win in a new track and stakes record time of 2:01.48, just 3/100 seconds faster than the previous 1 1/4 mile synthetic track record set by Delegation in 2013, but 32/100 seconds faster than the previous Plate record set by Izvestia on the dirt back in 1990.

Check out the three other stakes on the card: the King Edward (G2) won by Filo Di Arianna, the Canadian (G2) won by Fev Rover, and the Sweet Briar Too won by Hazelbrook. 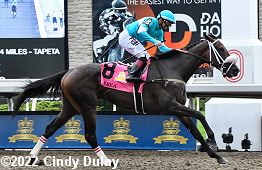 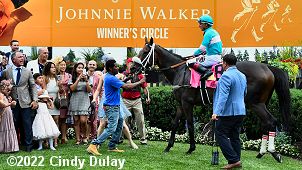 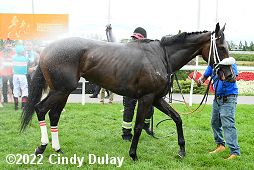 Left: Moira in the winner's circle. Donato Lanni of co-owner X-Men Racing said, "You know Kevin, he's the best. I've known Kevin since ‘04, and he's an unbelievable trainer, his training staff is just phenomenal. Everybody employed is phenomenal. She's such a nice filly. She's an amazing filly. We're just fortunate to be here with a good group of guys."

Right: Moira gets hosed off after the race. Winning trainer Kevin Attard, celebrating his first Plate, said of the rest of the Triple Crown, "We have not discussed past this race. Me being a local trainer, I would love to put my name beside a Triple Crown horse if I could. There's a lot of people involved, not just myself, and we'll discus it when the time comes." 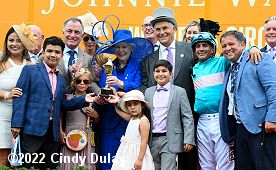 The Honourable Elizabeth Dowdeswell, Lieutenant Governor of Ontario, presents the Queen's Plate trophy along with Woodbine CEO Jim Lawson. This was a big owners group, so to the right is a close up with trainer Kevin Attard on the far right. Attard added, "I've been down this path with a few horses that I thought I've had chances. Obviously, I was really excited today with this filly. But it's just such a hard race to win and you don't know. But you know, I'm here now and I got this trophy in my hand I worked really hard. I have a great staff. And it's just a great moment and I'm so happy right now." 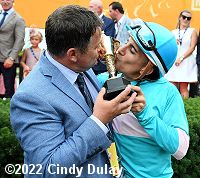 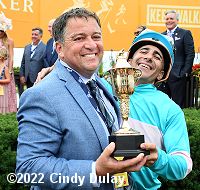 Trainer Kevin Attard and jockey Rafael Hernandez share a kiss with the trophy then crack up about it. Hernandez, celebrating his second Plate (after Shaman Ghost in 2015) said, "It's unbelievable. You know, with good horses, you can get out of trouble so quick and always get a second, or third gear like her. Sat off, save ground, and when you want to get out of the horses in front of you, you just move out, and she gave me everything. She gave me another gear, and when we turned for home, she was unbelievable. She's something else. She is so special."

Winning trainer Kevin Attard added, "We gotta have a horse that mentally can handle (the crowd and the big field). The filly has her quirks about her; she saddled really well but I think the crowd got to her and got a little edgy. She was able to mentally stay focussed and that's what defines a good horse." 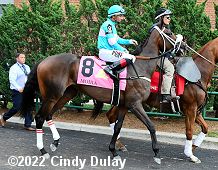 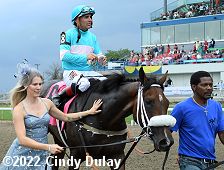 Left: Moira heads out to the track before the race with trainer Kevin Attard behind her. Attard added, "There were a lot of emotions leading up to this race. It's something that I've cherished for a long time growing up. I think this puts me in a special group of trainers. I just feel very privileged right now to be associated with this horse. I think she's an improving filly. I don't think we've reached the bottom of her yet. She has her quirks about her. She made me sweat. It's a good thing I sweat more than she did."

Right: Moira circles before going in the winner's circle. She is pretty fractious so did not go in the paddock or get the flower blanket put on her. Hernandez added, "This win is for her [Hernandez's late grandmother], and all my family enjoyed the moment. It's unbelievable for me, because this is home. [Canada] is home now and to be the first one for Kevin, it makes it so special." 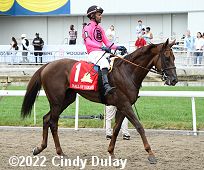 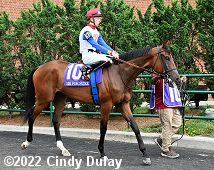 Right: Third place finisher Sir for Sure heads out to the track before the race. The Mark Casse trainee improved his record to 2 wins, 1 second, and 1 third in 6 starts, earning $201,164 for owner Heste Sport Inc. 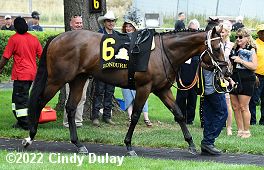 Left: Sixth place finisher and beaten favorite Rondure in the walking ring before the race. The Katerina Vassilieva trainee has a record of 2 wins, 1 second, and 0 thirds in 6 starts, earning $160,432 for owner-breeder Border Racing Stable.

Right: The horses break from the gate for the 163rd Queen's Plate. Lanni explained how Moira was named. "My wife and I watch a lot of TV and she likes a character on (Canadian sitcom) Schitt's Creek named Moira Rose. And (the filly) fits the character!" 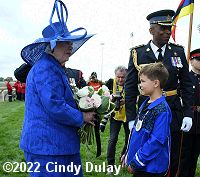 The Honourable Elizabeth Dowdeswell, Lieutenant Governor of Ontario was the Royal Representative at this year's Queen's Plate. She arrived in the landau carriage and was presented a bouquet of flowers by Jackson Bennett (who looked terrified).