On Sunday afternoon, a field of 13 Canadian-foaled 3-year-olds raced 1 1/4 miles over the Tapeta surface at Woodbine in the 162nd running of the $1 million Queen's Plate Stakes, the oldest continuously-run stakes race in North America and the first leg of the OLG Canadian Triple Crown, with a $500,000 bonus should a horse complete the sweep. After the truncated 2020 racing season was conducted without fans, this is the first time in over 2 years that a limited number of spectators (50% capacity per government regulations) were allowed to attend the Plate. Conditions were near tropical in Southern Ontario, with partly cloudy skies and a race time temperature of 31 C (87 F) but with the humidity it felt closer to 37 C (99 F).

Safe Conduct was sent off as the lukewarm 3-1 favorite off an 8th place finish in the Belmont Derby Invitational (G1) after finishing 4th in the Pennine Ridge Stakes (G3), both at Belmont Park. In to challenge him included 7-2 second choice Munnyfo Ro, winner of the Woodbine Oaks after finishing 2nd in the Selene (G3), and 7-1 third choice Harlan Estate off an allowance win.

Jockey Keveh Nicholls sent 28-1 Take a Chance to the lead first time by and he set fractions of 24.01, 48.37, and 1:13.11 while pressed by Safe Conduct and stalked by 16-1 Haddassah and 79-1 longest shot Go Take Charge. Turning for home Take a Chance tired allowing Safe Conduct to inherit the lead through 1 mile in 1:37.98. 11-1 Riptide Rock, last early under David Moran, came out 5 wide on the turn for his rally but just missed as Safe Conduct, confidently ridden by Irad Ortiz Jr., held him off to win by a head in 2:02.85. It was another length back to 29-1 H C Holiday third.

Check out the four other stakes on the card, all on the turf: the Ontario Colleen (G3) won by Our Flash Drive, the Dance Smartly (G2) won by Mutamakina, and the Highlander (G1) won by Silent Poet. 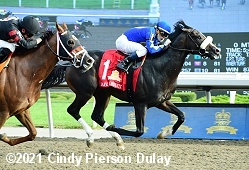 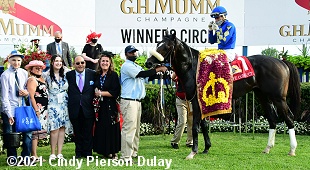 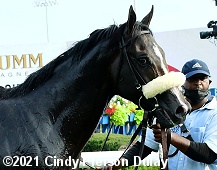 Left: Safe Conduct in the winner's circle. Winning breeder Mitchell Kursner said, "Blessed. I want to congratulate (owners) Dr. Vukevich and the wonderful people at WellSpring. They've done a marvelous job bringing this horse along. And of course, (trainer) Phil Serpe. "He's been training like a bear. The rule of thumb is that if you're a nice horse on the turf, you'll translate on the Tapeta and we're just delighted."

Right: Safe Conduct gets hosed off after the race. Winning jockey Irad Ortiz Jr., celebrating his first Plate win in his first attempt, said, "He's shown some speed before to the half, :48. We thought maybe two horses had speed and we want to be out of the traffic, so I broke running. I sat second on the clear, I bided my time, waited for the right time to roll and when I asked him to go, he kept fighting down the stretch. He kept moving forward. I saw somebody was flying outside... that was very close, I didn't know if I won the race after the wire but thank God I did." 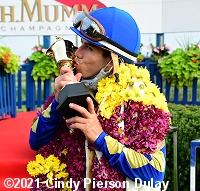 Left: The Honourable Elizabeth Dowdeswell, Lieutenant Governor of Ontario, presents the Queen's Plate trophy to jockey Irad Ortiz Jr. along with Woodbine CEO Jim Lawson. Lawson said when the event sold out, "We are ecstatic by the energy and anticipation from our fans to be with us for Sunday's Queen's Plate. The Queen's Plate is an event rich in tradition and having fans back to experience this race is exactly how it's meant to be enjoyed. We're more than ready to welcome a great crowd with protocols and distancing practices in place and know our fans will enjoy a comfortable day at the races."

Right: Irad Ortiz Jr. does the traditional kissing of the trophy. 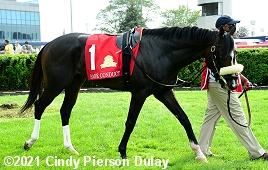 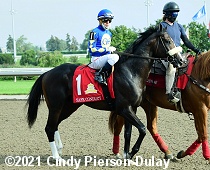 Right: Safe Conduct in the post parade. Ortiz added, "It's a great feeling always to come here. It's my pleasure to come here. I've got a lot of fans. They showed me some love. I really enjoyed it." 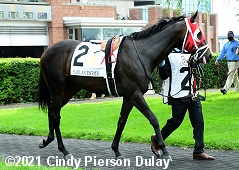 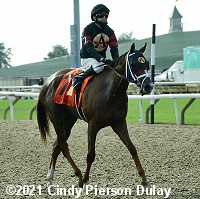 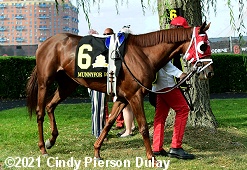 Left: Fourth place finisher filly Munnyfor Ro in the walking ring. The Kevin Attard trainee has a record of 2 wins, 2 seconds, and 2 thirds in 10 starts, earning $359,981 for owner Raroma Stable. 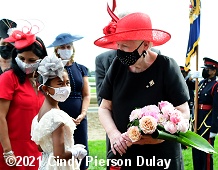 The Honourable Elizabeth Dowdeswell, Lieutenant Governor of Ontario was the Royal Representative at this year's Queen's Plate. She arrived in the landau carriage and was presented a bouquet of flowers by Amelia Rahman Wong.

The horses break from the gate for the 162nd Queen's Plate.