On Saturday afternoon, a field of 14 Canadian-foaled 3-year-olds raced 1 1/4 miles over the Tapeta surface at Woodbine in the 161st running of the $1 million Queen's Plate Stakes, the oldest continuously-run stakes race in North America and the first leg of the OLG Canadian Triple Crown, with a $500,000 bonus should a horse complete the sweep. Due to the ongoing pandemic and related restrictions, racing in Canada continues to be conducted without spectators, with only essential racing officials, horsemen, and a limited number of owners and media allowed to attend. In addition, border restrictions meant only locally based jockeys were named to ride. The race is usually run in late June or early July, but due to the delayed start to the season, was moved to September. Conditions were excellent with partly cloudy skies, a slight tailwind through the stretch, and a high of 21 C (71 F).

Curlin's Voyage was sent off as the 5-2 favorite off wins in the Fury Stakes and the Woodbine Oaks. In to challenge her included 3-1 second choice Clayton, winner of the Plate Trial, and 9-2 third choice Halo Again, runner-up in the Plate Trial after winning the Coronation Futurity and Queenston Stakes.

Check out the four other stakes on the card, all on the turf: the King Corrie Stakes won by Francatelli, the Bison City Stakes won by Mizzen Beau, the Canadian Stakes (G2) won by Rideforthecause, and the Ruling Angel Stakes won by Artie's Princess. 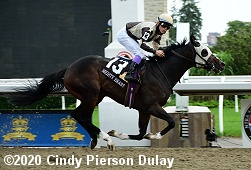 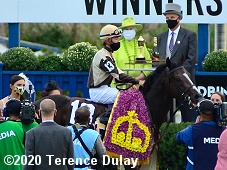 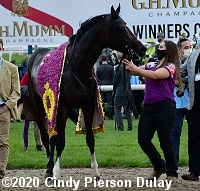 Left: Mighty Heart in the winner's circle. Winning trainer Josie Carroll, winning her 3rd Plate and who also trains the first 2 finishers, said, "I was concerned for a minute or two with the quick fractions but he looked like he was settling and doing it easily. We knew he'd go all day and he sure did. You know what, he's just a very exciting horse who's come a long way for Mr. Cordes who's had a lot of confidence in him from the start."

Right: Mighty Heart exits the winner's circle. Carroll added, "It was a very different day. I'd say it was a little calmer because we didn't have the big crowds in the paddock and things that rile the horses up so much so it was a much quieter day. We missed the fans, though. There's nothing like that moment when your horse is coming back after winning and the fans are applauding and honouring that moment, that performance. That's one of the most moving things for me so we did miss that. But I think in this instance it was probably a good thing. He can be a little flighty until he gets used to things so it may have benefited him." 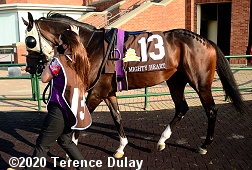 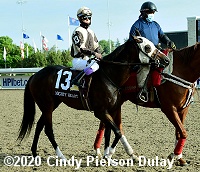 Left: Mighty Heart heads into the walking ring before the race.

Right: Mighty Heart in the post parade. Winning jockey Daisuke Fukumoto, winning his first Plate with his first ride said, "Unbelievable! I can't explain, he's feeling good today, he bolt good. I saw that nobody [was leaving] so I just sent him and he just kept going. After the wire, he still kept going, he didn't stop there. He was sharp today. I thought it was fast but I took the lead so I can't do anything, you know. I let him go. He only has one eye, but he's got a big heart, a mighty heart." This was just Fukumoto's third stakes win in his career. 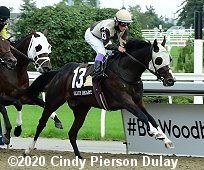 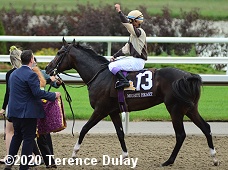 Right: Mighty Heart returns after the race. He lost his left eye in a paddock accident with his mother as a foal. Carroll explained, "When the dirt hit him in the face, he headed for the outside fence. We did a lot of breezing in behind other horses to get him used to it and he started to handle it well. We also added a blinker that covered his blind socket." 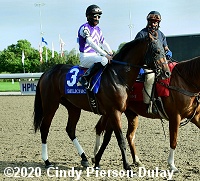 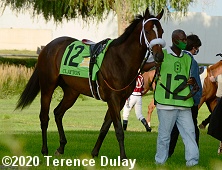 Left: Second place finisher Belichick in the post parade. Trainer Josie Carroll, who trains the first 2 finishers as well as the favorite, said, "Certainly, the filly being the favourite and most accomplished I expected her to be the top horse in there. But I had confidence in the other two or they wouldn't have been in there." 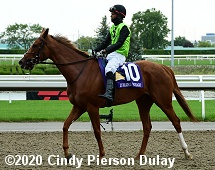 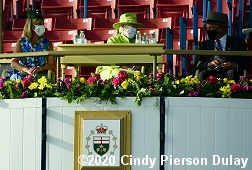 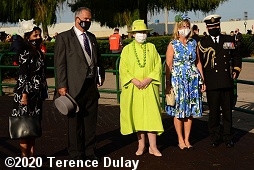 The Honourable Elizabeth Dowdeswell, Lieutenant Governor of Ontario was the Royal Representative at this year's Queen's Plate. Here she is in the royal box to watch the race and in the paddock to meet the owners, accompanied by Woodbine's CEO Jim Lawson (left). Lawson said, “While this year’s Queen’s Plate might be remembered for not having fans in the stands, I would much rather it be remembered for the collective efforts of so many people that allowed this race to be run and its storied history continued to be written. On behalf of Woodbine, a sincere thank you to our staff, partners and the entire horse racing community for everything they did make this day possible. Over the past several months we have certainly proved that we are stronger together and this historic handle is surely representative of that.”

The horses break from the gate for the 161st Queen's Plate.