Queen's Plate Day is one of the biggest racedays of the year at Woodbine and always attracts the largest crowd of the year, but due to the coronavirus epidemic, the race was postponed from June 27 to September 12, attendance was limited to owners, essential horsemen and officials, and limited media. Conditions were excellent for late summer in Toronto, with partly cloudy skies and a high temperature of 21 C (71 F). The E.P. Taylor turf course was firm (GoingStick reading 11.5) while the inner turf was hard (GoingStick 13.1). 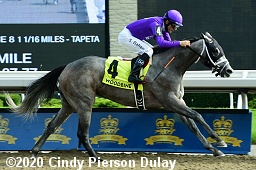 A field of 8 Canadian-foaled three-year-old fillies contested the $250,000 Bison City Stakes at 1 1/16 miles on the Tapeta, the second jewel of the Triple Tiara after the Woodbine Oaks. Oaks runner-up Afleet Katherine was the 4-5 favorite over 9-2 Truth Hurts, 4th in the Audubon Oaks at Ellis Park, and 7-1 Infinite Patience, 3rd in the Fury but 7th in the Oaks.

Jockey Steven Bahen sent 17-2 fourth choice Mizzen Beau to the lead first time by and she set fractions of 23.49, 47.68, and 1:12.76 while pressed by Infinite Patience and stalked by Truth Hurts. Turning for home, Mizzen Beau left the field behind, opening a 5 length lead through 1 mile in 1:37.77, and finishing up under wraps 4 3/4 lengths clear of late-running favorite Afleet Katherine in 1:44.35. It was a head back to Truth Hurts third.
Results Chart 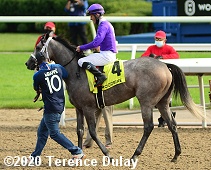 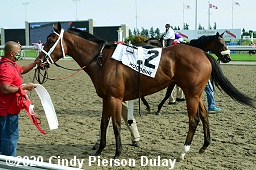 Left: Mizzen Beau heads to the winner's circle. Winning jockey Steven Bahen said, "She broke real sharp, and she's kind of a small little filly. Norm [trainer Casse] just said kind of let her be happy where she is like last time, and she was up there kind of tugging on me so I said, 'OK, this is where we're going to be' just hoping she'd settle down, and she did down the backside. Was perfect. I didn't hear anybody behind me. I kind of smooched to her to make her pick it up a little bit just on her own, and when we turned for home we went.”

Right: Second place finisher and beaten favorite Afleet Katherine gets unsaddled after the race. The Kevin Attard trainee improved her record to 2 wins and 2 seconds in 4 starts, earning $193,839 for owner-breeder Terra Racing Stable. 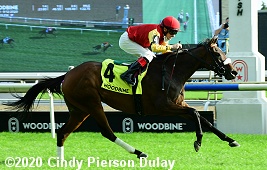 Immediately before the Queen's Plate, a field of 8 older fillies and mares contested the $250,000 Canadian Stakes (G2) presented by the Japan Racing Association, an "about" 1 1/8 mile trip around 1 turn of the E.P. Taylor turf. Cambier Parc, unraced since winning the Queen Elizabeth II Cup (G1) at Keeneland last October, was sent off as the 9-10 favorite over 7-2 Elizabeth Way, 3rd in the Dance Smartly (G2), and 11-2 Amalfi Coast, 3rd in the Seaway (G3).

Jockey Steven Bahen sent 9-1 Another Time to the lead out of the chute through fractions of 23.80, 46.55, and 1:09.49 while pressed by Amalfi Coast and stalked by Cambier Parc and Elizabeth Way. Entering the stretch, jockey David Moran, 7th early aboard 22-1 Rideforthecause, came out 4 wide for room and took over midstretch through 1 mile in 1:32.75. Kept to task by Moran, Rideforthecause drew off to win by 4 lengths over Cambier Parc in 1:45.00. It was another 2 1/4 lengths back to late-running 30-1 Court Return third.
Results Chart 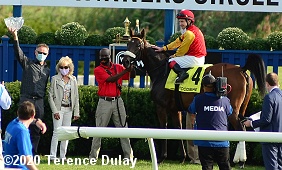 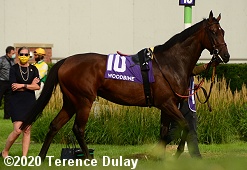 Left: Rideforthecause in the winner's circle. Winning trainer Gail Cox said, "This filly loves this distance. I think she's run really well this year, she had one race where she was sort of too close to the pace and didn't run the greatest but she's a tough filly. She just hasn't had the opportunity to get the distance very often. She gets a little bit wound and [having her secluded] seems to work really well for her. She had me a little bit nervous, but she definitely sustained it (her rally)."

Right: Second place finisher and beaten favorite Cambier Parc in the walking ring before the race. The Chad Brown trainee improved her record to 5 wins, 1 second, and 1 third in 9 starts, earning $835,400 for owner OXO Equine. 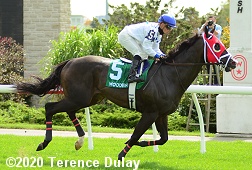 Kicking off the Saturday stakes quintet was the $100,000 King Corrie Stakes for 3-year-olds sprinting 5 furlongs on the inner turf. Francatelli was the 7-5 favorite in the field of 7 off 2 wins in allowance company. over 11-4 Forester's Turn, winner of the Greenwood Stakes, and 5-1 Lontano, 4th in an allowance last out.

Jockey Justin Stein sent Francatelli to the lead and he set a fast pace of 21.54 and 43.73 while chased by Forester's Turn and Lontano. Turning for home Francatelli left the field behind to win going away by 4 1/4 lengths in a course record tying 55.46. It was another 3/4 lengths back to Forester's Turn third.
Results Chart 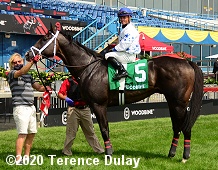 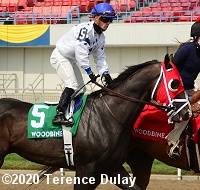 Left: Francatelli in the winner's circle. Winning jockey Justin Stein said, "He's amazing. We left the gate, he got his stride right away and he was cruising. I knew we were covering ground pretty quick, but he was doing it easy, just like a fast gallop."

Right: Francatelli in the post parade. Stein added, "He's got a big stride and he's really athletic. He's huge; I couldn't believe the speed he could show going five-eighths. He's strong and just way faster than the rest of them." 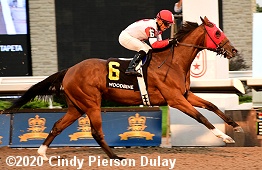 Closing out the stakes action was the $100,000 Ruling Angel Stakes featuring a field of 5 three-year-old fillies sprinting 6 1/2 furlongs on Tapeta. Boardroom, undefeated in 2 starts, was the 3-4 favorite in the field of 5 over 9-4 Artie's Princess, 4th (disqualified to 7th) in the Coronation Cup at Saratoga, and 5-1 Avie's Samurai, 2nd in the Ontario Colleen (G3).

At the start Boardroom broke a rein but continued to race with the field kept to the outside by jockey Rafael Hernandez, leading out of the chute through an opening quarter of 22.27 before Artie's Princess took over on the turn through a half in 44.98, pressed by Avie's Samurai and stalked by Boardroom. Entering the lane Artie's Princess left the field behind, opening a 5 length lead midstretch through 3/4 in 1:08.60. Our Secret Agent, last early, put in a strong rally to no avail as Artie's Princess cruised to win by 3 3/4 lengths in 1:14.97, just 53/100 off the track record. It was a long 7 lengths back to favorite Boardroom third, who was pulled up by Hernandez soon after the finish with the assistance of the outrider.
Results Chart 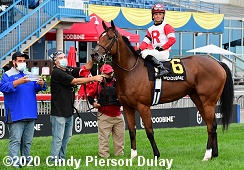 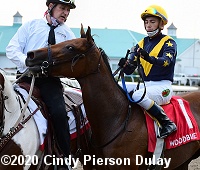 Left: Artie's Princess in the winner's circle. Winning jockey Justin Stein said, "I had horse left. I saved some pony and around the turn I can see out of my periphery the horses on the outside coming, and I was just sitting and waiting for the quarter pole to chirp at her and see if she's going to run." This was his 2nd stakes win of the day. He added, "It's been amazing. Last night, I'm looking at the program and looking at all the horses and I'm just pumped, just stoked to come out and ride and give them my best and put them in a spot they can hopefully win from. It's really exciting and easy to get up in the morning when you're riding these kinds of horses."

Right: Third place finisher and beaten favorite Boardroom returns after the race with her left rein broken. The Josie Carroll trainee improved her record to 2 wins and 1 third in 3 starts, earning $69,401 for owner LNJ Foxwoods.