Saturday at Woodbine, the two major local preps for the Queen's Plate Stakes, the first leg of the Canadian Triple Crown, were contested over the Tapeta main track. Conditions were excellent at the Toronto oval next to Pearson International Airport, with sunny skies and a race time temperature of 28 C (82 F). The highlight race of the afternoon was the 65th running of the $500,000 Budweiser Woodbine Oaks, featuring top Canadian-bred 3-year-old fillies going 1 1/8 miles, kicking off the Triple Tiara series. A field of 10 faced the starter, with Curlin's Voyage sent off as the 7-5 favorite off her win in the Fury Stakes after finishing second in the Star Shoot. In to challenge her included 4-1 second choice Merveilleux, 4th in the Selene Stakes, and 9-2 third choice Afleet Katherine, undefeated in 2 starts and making her stakes debut here.

Jockey Emma-Jayne Wilson sent 7-1 Infinite Patience to the lead first time by and she set fractions of 23.15, 46.79, and 1:11.21 while pressed by 68-1 Bayou Belle and stalked by 22-1 Mizzen Beau. Turning for home the pacesetters tired as Curlin's Voyage, 8th early under Patrick Husbands, came through on the inside to take the lead through 1 mile in 1:36.91. Kept to task by Husbands, Curlin's Voyage drew off late to win by 1 3/4 lengths over late-running Afleet Katherine in 1:50.04. It was another 1/2 length back to Merveilleux third. 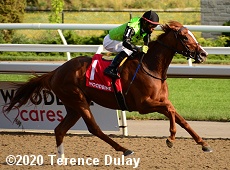 Left: Curlin's Voyage in the winner's circle. Winning trainer Josie Carroll said, "She's a very, very special filly. I think we knew what we had from the start when we were very bold and put her against the boys the first time out in a stake. It's not something you do lightly; you have to think one's special. I had a few concerns this year with the way the stakes schedule played out. I knew I wasn't going to get a two-turn race in her and it gave me some concern but I trained her fairly hard into this race and she just thrived on it. Good horses thrive on training."

Right: The trophy presentation for the Woodbine Oaks. 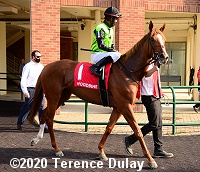 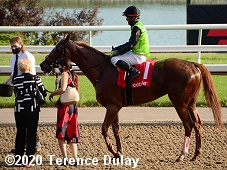 Left: Curlin's Voyage exits the paddock before the race. Winning jockey Patrick Husbands, celebrating his 4th Oaks win, said, "The first quarter was pretty quick, so that singled them out. As you know, I have to ride (Rafael) Hernandez (aboard Merveilleux) from the wire, he was on me, and so, in the first turn and in the second turn he was on me and so I told myself, 'I'm on the best horse,' so when I reached the five-eighths pole, I was looking for any holes." 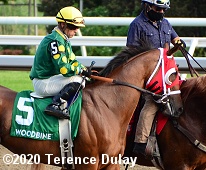 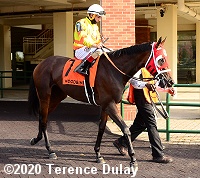 The start of the Woodbine Oaks. Husbands added, "The first hole that opened up, I was clear of that one and then the second hole opened up by the 3/8 pole, and then at the quarter pole the other one opened up and it was all sailing from there." 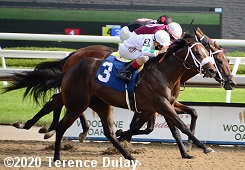 An hour before the Oaks, a field of 6 Canadian-foaled three-year-old males also went 1 1/8 miles in the $125,000 Plate Trial Stakes, the major local prep for the Queen's Plate to be run in 4 weeks time. Clayton was sent off as the 3-5 favorite off an allowance win on July 18, making his stakes debut here. In to challenge him included 3-1 second choice Halo Again, winner of the Queenston Stakes after finishing 4th in the Jeff Ruby Steaks (G3) at Turfway, and 9-2 third choice Elusive Knight, runner-up in his last 4 starts.

Jockey Justin Stein sent 8-1 Dotted Line to the lead first time by through fractions of 24.72, 49.31, and 1:13.73 while pressed by Halo Again and stalked by Clayton. Entering the stretch, jockey Rafael Hernandez sent Clayton 4 wide for room and he swept to the front through 1 mile in 1:37.92. Clayton held off Halo Again in a duel to the line to win by 1/2 a length in 1:50.61. It was a head back to Dotted Line third.
Results Chart 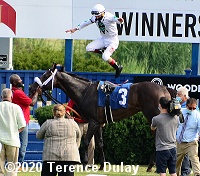 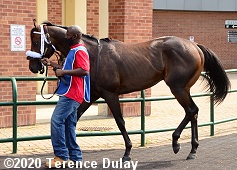 Left: Clayton in the winner's circle. Winning trainer Kevin Attard said, "He loomed up like he was going to kind of kick on like he did in his last race and obviously they kind of kicked on with him and made it a good fight to the finish. So, we'll kind of watch the replay, see how he comes out of this race and take it from there... see if there's any adjustments that need to be made. Obviously, this is just kind of one step in the right direction, but I don't want to be remembered as the Plate Trial winner."

Right: Clayton walks over before the race. Winning jockey Rafael Hernandez said, "I thought it was going to be more easy. There was a little trouble early in the race; I tried to settle down the horse, he just wanted to go. After the two horses got in front, he dropped the bridle and settled down and I was more confident in the backside about him." 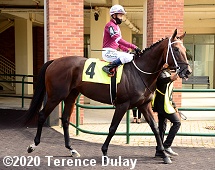 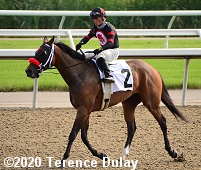 The start of the Plate Trial. Attard added, "Obviously, everybody dreams of running in the Plate and sometimes you're taking just a hope and a prayer to kind of go in there and hope the stars align for you. Obviously, this situation's a little different, we're going in with one of the favourites and we know we've kind of got a good shot to maybe take it all, but there's going to be more shooters coming and it's not going to be easy." 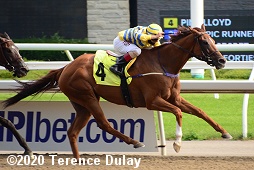 The $125,000 Bold Venture Stakes (G3) featured a field of 7 older horses sprinting 6 1/2 furlongs on the Tapeta. As expected Pink Lloyd was sent off as the 3-5 favorite, 5th in this race in 2018 and 4th last year (when declared a non-starter) but undefeated since, including the Jacques Cartier (G3) and Shepperton this season. In to challenge him included 4-1 second choice White Flag, 5th in the Jaipur (G1) at Belmont, and 7-1 third choice Olympic Runner, 4th in the Connaught Cup (G2).

10-1 Roaring Forties and 10-1 Malibu Secret battled for the lead out of the chute and into the turn through fractions of 23.22 and 45.60 while pressed by Pink Lloyd and stalked by White Flag. Entering the lane, Malibu Secret gained a short lead through 5f in 57.81 but Pink Lloyd, confidently ridden by Rafael Hernandez, found room between Malibu Secrety and Roaring Forties to surge to the front through 6f in 1:09.90. Olympic Runner put in a strong late rally from last but Pink Lloyd held him off to win by a neck in 1:16.03. It was a long 3 1/4 lengths back to Malibu Secret third.
Results Chart 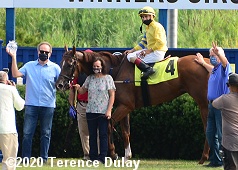 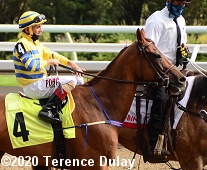 Left: Pink Lloyd in the winner's circle. Winning trainer Bob Tiller said, "He's done everything, he keeps doing everything, he overcame a bad trip today for him -- he loves to run at horses, not be squeezed in between horses -- and I think he kind of thought it was over, and that horse come running, run a big race, so we win again. It's the 22nd stakes win, 25th win of his life. I'm in this game a long time and there will never be another horse like him. He doesn't like the heat and he was kind of flat today but he really wasn't as sharp as he can get so when you combine 128 pounds – when you go to put the weight on this horse in the paddock and that big lead weight pad gets on him – you realize what kind of a horse this is. He's eight years old, these are four-year-olds and five-year-olds and he just keeps doing it."

Right: Pink Lloyd in the post parade. Winning jockey Rafael Hernandez said, "This is the first time I've had to ask him. He broke well, there was no pace in the race so I had to play it by ear, put him behind a horse. Those other two horses made the pace and I just sat behind them and waited for the time to push the button. I don't want to be in the front that's why I tried keeping him outside, get him relaxed and settled down and he did it. He settled down, sat behind the two horses that made the pace and just waited to turn for home." 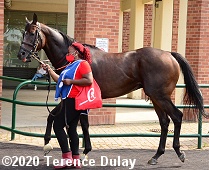 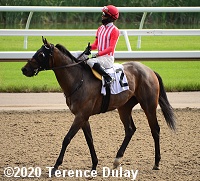 Left: Second place finisher Olympic Runner walks over before the race. The Mark Casse trainee improved his record to 3 wins, 2 seconds, and 2 thirds in 11 starts, earnng $165,671 for owner Gary Barber.