There were two Grade 2 stakes on the E.P. Taylor turf course on the undercard of Woodbine Oaks day at Woodbine. Conditions were excellent with sunny skies with a temperature of 28 C (82 F), and the course going firm (GoingStick 11.5). A field of 8 older horses went to post for the $175,000 King Edward Stakes (G2) at one mile around one turn, the main local prep for the Woodbine Mile on September 12. Delaware was sent off as the lukewarm 2-1 favorite, winless since the Prix Daphnis (G3) at Deauville a year ago, and 2nd in an allowance at Belmont last out. In to challenge him included 3-1 second choice Mr Ritz, winner of the Seagram Cup (G3), and 7-2 third choice March to the Arch, winless since the Sunshine Millions Turf in January but 6th in the Wise Dan (G2) last out. 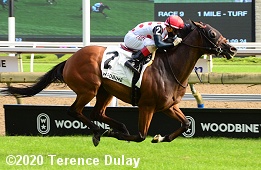 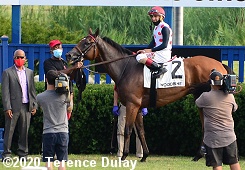 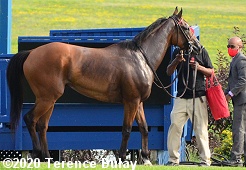 Left: March to the Arch in the winner's circle. Kathryn Sullivan, assistant to winning trainer Mark Casse said, "It is [good to see him get a graded stakes win], he's such a lovely little horse, he tries every time. He's just really special. You know, the race at Churchill (Wise Dan) was a really tough race; a lot of good horses came out of that race, so it looks a little better, but he's just such a nice horse. He tries every time."

Right: March to the Arch gets hosed off after the race. 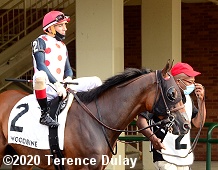 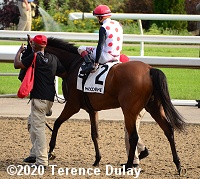 Left: March to the Arch heads out of the paddock before the race. Sullivan added, "Rafael rode a great race -- three stakes in a row for him today, so he's certainly riding well. I just thought he rode a really smart race, took his time, waited until he got his spot. I think he came out of the gate a little awkward, bumping with another horse but Rafael's so smart, he doesn't get panicked, just took his time and waited for the right moment to pull the trigger."

Right: March to the Arch returns after the race. 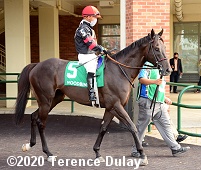 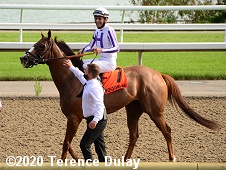 Left: Second place finisher Admiralty Pier heads out of the paddock before the race. The Barbara Minshall trainee improved his record to 5 wins, 3 seconds, and 2 thirds in 21 starts, earning $323,708 for owners Hoolie Racing Stable and Bruce Lunsford. 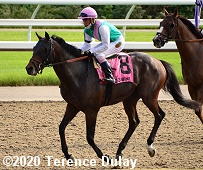 Fifth place finisher and beaten favorite Delaware returns after the race. The Chad Brown trainee has a record of 3 wins, 4 seconds, and 1 third in 14 starts, earning $149,041 for owner-breeder Juddmonte Farms. 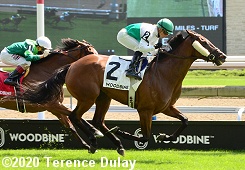 Kicking off the Saturday stakes quintet was the $175,000 Dance Smartly Stakes (G2) for older fillies and mares going 1 1/4 miles on the turf as a prep for the E.P. Taylor Stakes on October 18. Etoile was sent off as the 7-5 favorite in the field of 6 off her 8th place finish in the Gamely (G1) at Santa Anita. In to challenge her included 2-1 second choice Elizabeth Way, winner of the Nassau (G2), and 5-1 third choice Romantic Pursuit, 3rd in an allowance at Keeneland after finishing 2nd in The Very One (G3) at Gulfstream. 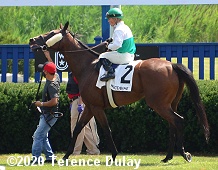 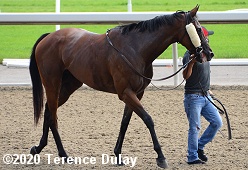 Right: Theodora B. heads back to the barn after the race. 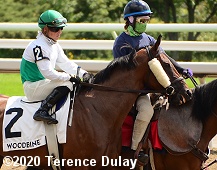 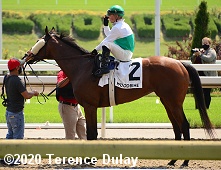 Left: Theodora B. in the post parade. Stein added, "We wanted to win, for sure. Pretty confident in her; I galloped her yesterday and she's a real efficient mover, big long stride. We were covering a lot of ground but she wasn't doing much in the gallop, so I knew what I had today. I talked to the trainer (Michael Dickinson) on the way in and, unfortunately, our plans at the beginning of the race were mixed up. She wanted to leave and I had to go with it but she just kept running, a lot of power."

Right: Theodora B. returns after the race. 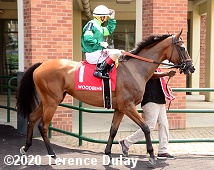 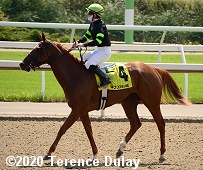