On Sunday afternoon, a field of 14 Canadian-foaled 3-year-olds raced 1 1/4 miles over the Tapeta surface at Woodbine in the 160th running of the $1 million Queen's Plate Stakes, the oldest continuously-run stakes race in North America and the first leg of the OLG Canadian Triple Crown, with a $500,000 bonus should a horse complete the sweep.. Horseplayers wagered a record $4.6 million on the race itself, with on track handle growth by 14 per cent. Conditions were typical for late June in Toronto, with partly cloudy skies and a race time temperature of 28 C (82 F).

Wando Stakes winner Skywire was set off as the 2-1 favorite off his 2nd place finish in the Marine Stakes (G3). In to challenge him included Coronation Futurity winner and 5-2 second choice Avie's Flatter off his 6th place finish in the American Turf (G2) at Churchill Downs afer winning the Transylvania (G3) at Keeneland, and 7-2 third choice One Bad Boy, in from California where he was second in the Alcatraz Stakes at Golden Gate Fields. 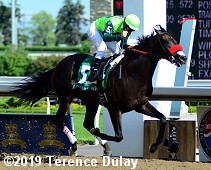 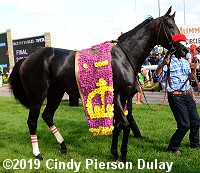 Left: One Bad Boy in the winner's circle. Winning co-owner Greg Hall said, "It was awesome, very awesome. We were a little worried about his ability to run the mile-and-a-quarter, but you saw that, he started pulling away, so we're very excited about that. We knew he was really good training but we just couldn't find the right race for him. We felt he could've been a horse for the Triple Crown in the U.S. but he just didn't have the points or raced enough, so we pointed to this probably three or four months ago."

Right: One Bad Boy exits the winner's circle. Brooke Hubbard, bloodstock agent for majority owner SayJay Racing said, "It was hard to say anything up there or to even look, but the last (part), we were all so excited. We didn't take (the Prince of Wales) into consideration. We kind of think he's definitely more turf than dirt so that's our main concern if we do decide to go to the next leg. We're definitely going to have to have a little strategizing party and talk it over and see what happens." 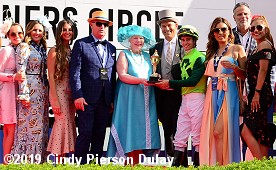 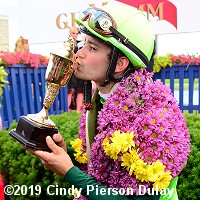 Right: Winning jockey Flavien Prat kisses the trophy. Prat said, "(Avie's Flatter) was next to me, so I knew he was the horse to beat. By the eighth-pole, I asked him to reengage and he drove away. So from that point, I thought I was going to win. Just to get a feel of him (riding him in the Alcatraz Stakes). He had the blinkers on, today we took the blinkers off and it probably helped us." 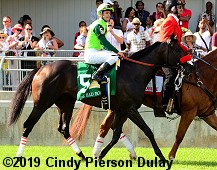 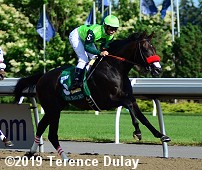 Left: One Bad Boy returns after the race. Jockey Flavien Prat said, "I won the Derby and the Queen's Plate this year," Prat said. "It's an amazing year so far for me. I'm going to enjoy this as much as I can." He is one of only 3 jockeys to win the Kentucky Derby (with Country House via disqualification) and the Queen's Plate in the same year. The other two were Bill Hartack aboard Northern Dancer (both races) in 1964, and Kent Desormeaux aboard Real Quiet (Derby) and Archers Bay (Plate) in 1998.

Right: One Bad Boy leads first time by. Prat added, "My point wasn't to go on the lead. But I broke well and all of a sudden nobody was going for it so I said, 'I better take it when I can.' The way the whole thing went, I thought it was the right move." One Bad Boy is the first gate-to-wire Plate winner since Midnight Aria in 2013. 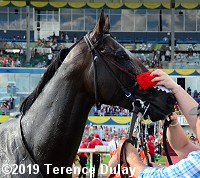 Left: One Bad Boy gets a drink before heading back to the barn.

Right: The horses break from the gate for the 160th Queen's Plate. You can see eventual winner One Bad Boy (lime silks and red shadow roll out of post 5) at right breaking cleanly while on the left, Tone Broke (post 11, black and red silks) breaking inward and interfering with favorite Skywire (post 10, pink silks), bumping him into Suitedconnected (post 9, white silks). 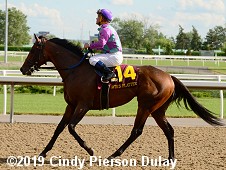 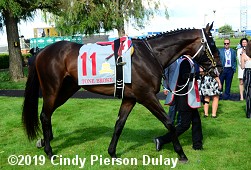 Left: Second place finisher Avie's Flatter returns after the race. Jockey Javier Castellano said, "Kept tracking the winner right there all the way on the lead. He never stopped and he never came back to me. I was in perfect position in the race, the race was slow and I was right next to (One Bad Boy) but I couldn't get by. Second-best today." Trainer Josie Carroll added, "I thought Avie's Flatter ran a great race. He stalked the winner all the way and he couldn't get by him. I think he ran a great race and was second-best today."

Right: Third place finisher Tone Broke in the walking ring before the race. Jockey Luis Contreras said, "My horse kind of stumbled in the first jump and went and lug in a little, just in the first jump of the break. But (favorite Skywire) didn't break well at all. But after that it was just so perfect I was just sitting right behind the speed. I was very pleased how my horse relaxed. He was so sharp in the post parade and I was a little bit worried. I was just riding behind the speed and once I was in the race, I thought I had a really good chance to win. And it was not enough to win the race, but I'm very pleased how he ran first time on the Tapeta." 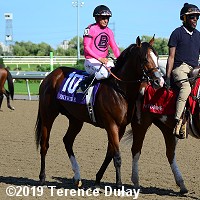 Left: Eleventh place finisher and beaten favorite Skywire in the post parade. The 2-1 favorite was shut off by Tone Broke at the start and then bumped by 135-1 longest shot Suitedconnected before settling in 10th about 7 lengths off the pace under Eurico Rosa da Silva, but showed nothing late to finish 11th beaten 19 1/4 lengths. The Mark Casse trainee has a record of 3 wins, 1 second, and 0 thirds in 6 starts, earning $138,031 for owners Gary Barber and Lucio Tucci. 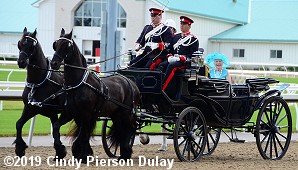 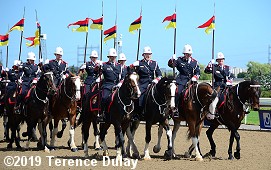 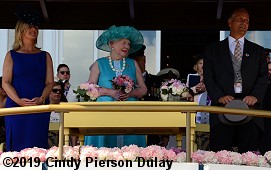 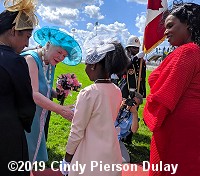 After exiting the landau, she was first welcomed to Woodbine by President and CEO James Lawson then presented with flowers by Jahzara Fajuyigbe. Lawson then escorted Her Honour across the turf course and up the steps to the Royal Box on the second floor clubhouse to watch the Dance Smartly Stakes.