The $225,000 Coronation Futurity at Woodbine is the premier race for Canadian-foaled 2-year-olds, and usually influences voting for the Sovereign Awards in the 2-year-old male category as well as determines the early favorite for next year's Queen's Plate and Canadian Triple Crown, playing a similar role as the Breeders' Cup Juvenile (G1) does in America. A field of seven went to post in the 115th renewal of this 1 1/8 mile Tapeta main track test, contested under cloudy skies at sunset with a race time temperature of 35 degrees. Avie's Flatter was sent off as the 3-5 favorite, coming off a win in the Cup and Saucer Stakes and a 4th in the Summer Stakes (G1). In to challenge him included 11-4 second choice Tripwire, second in the Grey Stakes (G3) after finishing 3rd in his debut, and 6-1 third choice Federal Law, who shipped over from England to finish 11th in the Summer (G1) then won an allowance last out.

Jockey Rafael Hernandez sent 13-1 D Magician to the lead first time by and he set fractions of 24.81, 50.47, and 1:14.65 while pressed by Tripwire and stalked by 28-1 Moon Swings. Entering the stretch, D Magician tired while favorite Avie's Flatter, 6th early under Eurico Rosa da Silva after stumbling at the break, came out 5 wide to sweep to the lead through 1 mile in 1:39.09. Federal Law, 5th early under David Cohen, put in a strong 4 wide rally but Avie's Flatter held him off by 1/2 a length in 1:51.73. It was another 2 3/4 lengths back to Moon Swings third, and 1/2 more to Tripwire fourth. 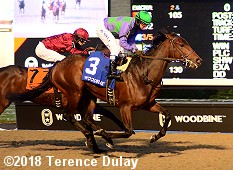 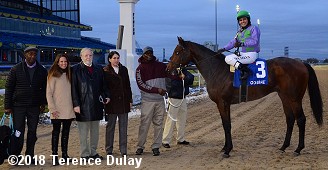 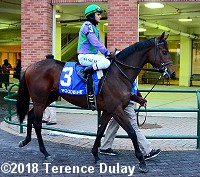 Left: Avie's Flatter in the winner's circle. Winning jockey Eurico Rosa da Silva said, "When he broke, he stumbled a little bit. And then I was in a position where the pace was not very fast. It took me a little bit to relax him. When I got to the backside, I said I'm going, because I had so much horse. But then everybody started going, and I said you know what, I'm waiting. At the 3/8 pole when I asked him, I had a lot of horse, and he just closed so quick." This was Da Silva's 27th stakes win this season at Woodbine. He added, "I'm very, very lucky. I ride for the best trainers here. Josie Carroll brought this horse today, you just look at the horse and you can tell. I have no words to say how much I’m grateful for everybody – also for the grooms and exercise riders."

Right: Avie's Flatter heads out of the paddock before the race. The Josie Carroll trainee improved his record to 3 wins, 0 seconds, and 0 thirds in 4 starts, earning $251,834 for owner-breeder Ivan Dalos. Carroll said, "(I was) more concerned early on when he was climbing into the (Tapeta material) hitting him in the face, he wasn't quite used to it, but once (da Silva) swung him out he seemed to have lots of horse. He has a quick turn of foot, it was very exciting. Still learning!" 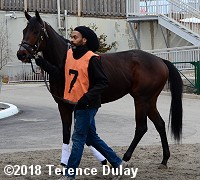 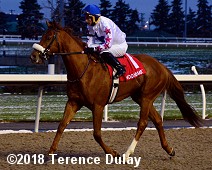 Left: Second place finisher Federal Law walks over before the race. The 6-1 third choice raced 5th 4 lengths off the pace under new jockey David Cohen, then rallied 4 wide to get second beaten 1/2 a length. The Mark Casse trainee improved his record to 2 wins, 3 seconds, and 0 thirds in 7 starts, earning $81,565 for owner Qatar Racing Limited.

The horses break from the gate for the Coronation Futurity.