Breeders' Cup Challenge "Win and You're In" weekend at Woodbine concluded on Sunday with races for 2-year-olds on the turf, each contested at 1 mile around 1 turn of the E.P. Taylor Turf Course. Similar to Woodbine Mile day, it was sunny and warm with temperatures in the mid 80's, but with the turf officially in the "firm" range with the GoingStick reading of 11.3.

A field of 12 two-year-old males contested the $250,000 Summer Stakes (G1) looking for automatic entry into the Breeders' Cup Juvenile Turf. Fog of War was sent off as the 11-10 favorite, exiting his debut win oer the Saratoga turf on August 13. In to challenge him included 5-1 second choice Jungle Warrior, a Woodbine debut winner on turf on August 4, and 15-2 third chice Nashtrick, a debut winner over Woodbine turf on August 24.

Also on the card was the Natalma Stakes (G2) won by La Pelosa. 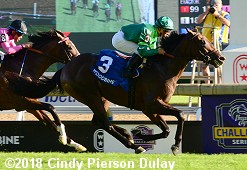 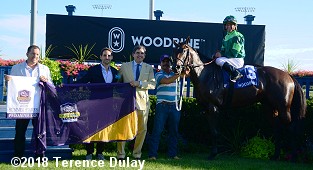 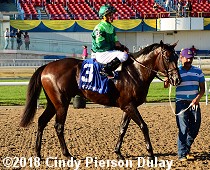 Left: Fog of War in the winner's circle. Winning jockey Javier Castellano said, "I put him behind the horses, covered up, and let him see the target all the way in the race. I liked the way he split horses at the quarter pole. He's really a smart horse. When I asked him, he finished really well. These are the kind of horses you want to ride. These kinds of horses have lot of potential. He's a very talented horse and I think the key was I tried to teach him something for the future, for the next race. It's the kind of horse that you don't want to be on the front with everybody chasing, you want to teach him something and let him win the race and go forward. I think he's got a lot of potential and he's coming around very well."

Right: Fog of War heads back to the barn. Winning owner Peter M. Brant said, "(Trainer) Chad Brown and I looked at this horse and we just liked the way he was made. He was a choice of ours, and he's really come through. He's a wonderful horse. Chad and his whole team have done a great job with this horse. The fact that he's bred to go longer, and won at five and a half like that, and showed that burst of speed, that was very encouraging. But, you never know until you get further down the road like here and run in a Group 1. You always hope, and this is a game of great hopes and that's what keeps us all in." 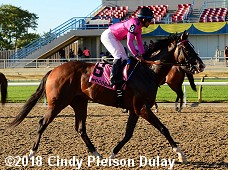 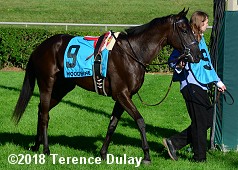 Left: Second place finisher War of Will in the paddock before the race. Jockey Joel Rosario said, "It was a good trip. He broke well, and it looked like the other horse wanted to take the lead so I just travelled with him for a little bit. He came home very nice. He responded very well but the favourite came with a strong run on the outside. It was a very good performance. He ran well but the other horse had talent and finished very fast."


A field of 13 two-year-old fillies contested the $250,000 Natalma Stakes (G1), with the winner earning a berth in the Breeders' Cup Juvenile Fillies Turf. My Gal Betty was sent off as the 11-4 favorite, winner of the Catch a Glimpse after being disqualified from 1st to 3rd in the My Dear Stakes. In to challenge her included 13-4 second choice La Pelosa, 2nd in the Sweet Solera (G3) at Newmarket, and 4-1 third choice Stillwater Cove, winner of the Bolton Landing at Saratoga after finishing 13th in the Albany (G3) at Royal Ascot.

Jockey Jerome Lermyte sent 30-1 Eyeinthesky to a clear lead down the backstretch and around the turn through fractions of 22.98, 45.36, and 1:09.08 while pressed by 11-2 fourth choice Artilena and stalked by Stillwater Cove. Entering the stretch Eyeinthesky tired allowing Stillwater Cove to inherit the lead through 7f in 1:21.56 before also tiring out of contention. La Pelosa, 9th early under Jamie Spencer, came out 3 wide for room and rallied to take over the lead at the 1/16 pole, holding off favorite My Gal Betty by a length in 1:33.70. It was another 2 lengths back to 33-1 Bold Script third. 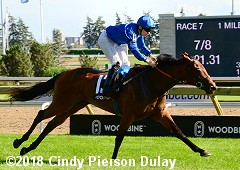 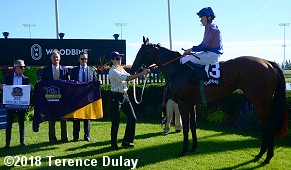 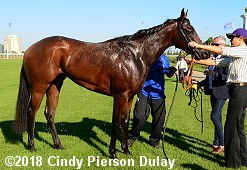 Left: La Pelosa in the winner's circle. Winning jockey Jamie Spencer said, "She did everything right. She did what her U.K. form suggested it would do and the race worked out perfectly. I just got her into her rhythm where she's happy and let her take it from there. The pace was strong, so I was a little bit farther back than I initially planned but that's the way it panned out and she was very brave in the straight when I asked her for a full effort."

Right: La Pelosa being hosed off after the race. Alex Merriam, assistant to trainer Charlie Appleby said, "She's a lovely filly. I think she's turned a few heads this week. She shipped well, she travelled well, and she's done everything right, which is a big ask for a two-year-old filly, so we're really pleased with her." 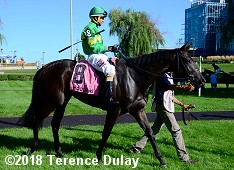 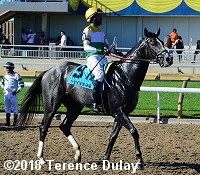 Left: Second place finisher and beaten favorite My Gal Betty returns after the race. Jockey Rafael Hernandez said, "We had a good trip. No excuse about that, we just got beat. My filly ran as hard as she could." 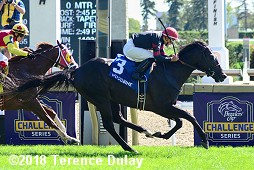 Kicking off the Sunday stakes trio was the $100,000 Vice Regent Stakes for Ontario-sired 3-year-olds also going 1 mile on the turf. Queen's Plate 12th place finisher Silent Poet was sent off as the 7-5 favorite over 5-2 Royal Laser, an allowance winner last out, and 7-2 Eskiminzin, 4th in both the Prince of Wales and Breeders' Stakes. Jockey Chris Husbands sent 29-1 Silver Sheriff to the lead through fractions of 23.63 and 46.88 while pressed by Silent Poet and stalked by 5-1 fourth choice Be Vewy Vewy Quiet. On the turn Silver Sheriff tired allowing Silver Poet to inherit the front through 3/4 in 1:10.58. Kept to task by Gary Boulanger, Silent Poet led the length of the stretch, holding off late-running Royal Laser by a length in 1:33.74. It was another 1 1/2 lengths back to 17-1 Carmenootz third. 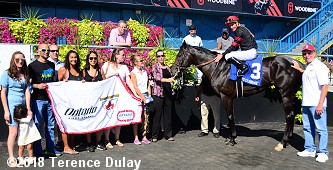 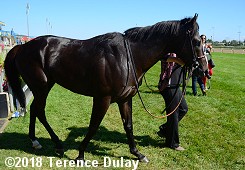 Left: Silent Poet in the winner's circle. Winning jockey Gary Boulanger said, "He's a really neat little horse. He kind of does whatever I ask him to do. He responds when I ask him. He kind of gets out front and he spurts then he'll wait, he'll spurt then he'll wait. He's a nice, fun horse to ride. Nick's done a tremendous job with him, it's a pleasure to ride him."

Right: Silent Poet again. Winning trainer Nick Gonzalez said, "We got a little aggressive when we tried the Queen's Plate, but it didn't hurt him one little bit and the horse is simple, easy to train. He just did what he had to do today."