Queen's Plate Day is one of the biggest racedays of the year at Woodbine and always attracts the largest crowd of the year, but due to the coronavirus epidemic, the race was moved to mid August rather than its traditional late June or early July date, and attendance was limited however this was in stark contrast to 2020 when fans were prohibited from attending any race day all season. Conditions were near tropical in Southern Ontario, with partly cloudy skies and a race time temperature of 31 C (87 F) but with the humidity it felt closer to 37 C (99 F). The E.P. Taylor turf course was rated firm (GoingStick reading 11.3) 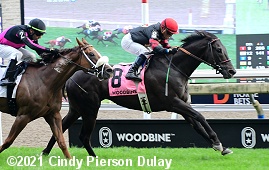 $350,000 The final stakes on the afternoon was the $350,000 Highlander Stakes (G1) for older horses sprinting 6 furlongs on the turf. Caravel was sent off as the 1-2 favorite in the field of 8 off wins in The Very One at Pimlico, the Goldwood at Monmouth and the Caress (G3) at Saratoga. In to challenge her included 8-1 second choice Chuck Willis, 6th in the Connaught Cup (G2), and 9-1 third choice Turned Aside, 9th in the Shakertown (G2).

Jockey Irad Ortiz Jr. sent Caravel to the lead down the back and around the turn through fractions of 22.35 and 45.16 while pressed by Chuck Willis and stalked by 10-1 Silent Poet. Turning for home, Silent Poet under jockey Justin Stein took over the lead through 5f in 56.14. 12-1 Admiralty Pier put in a strong late rally from 8th but Silent Poet held him off to win by 1/2 a length in 1:07.98. It was another 1 1/4 lengths back to favorite Caravel third.
Results Chart 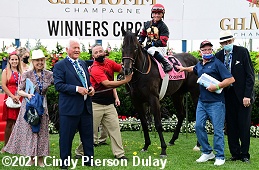 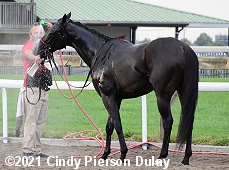 Left: Silent Poet in the winner's circle. Winning trainer Nick Gonzalez said, "Justin and I have been talking about it right up until this race and he said 'You know, Nick, we drew two inside post positions his first two starts.' "I break, ‘Poet' breaks well, and I've got these guys on the outside of me chirping, chirping, chirping, and ‘Poet' wouldn't relax; he used himself a lot more than he would have in the first eighth of the race. And he backed up both times."

Right: Silent Poet gets a drink on the way back to the barn. 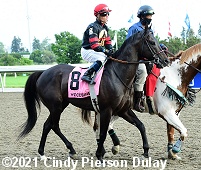 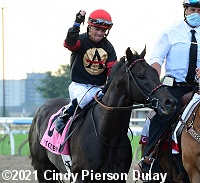 Right: Silent Poet returns after the race. Gonzalez added, "When the overnight came out and we had the eight-hole, Justin came by in the morning and said, ‘Nick, I think we're going to be able to get a nice trip today.' Everything worked out." 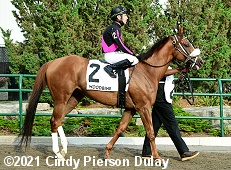 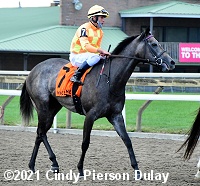 Left: Second place finisher Admiralty Pier heads out the the track before the race. The Barb Minshall trainee improved his record to 6 wins, 5 seconds, and 3 thirds in 28 starts, earning $463,584 for owners Hoolie Racing Stable and Bruce Lunsford. 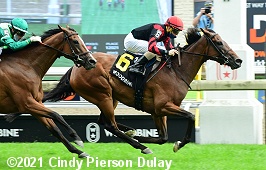 Immediately before the Queen's Plate, a field of 7 older fillies and mares contested the $175,000 Dance Smartly Stakes (G2) at 1 1/4 miles on the turf, the major local prep for the E.P. Taylor Stakes and the first race of Woodbine's "Ladies of the Lawn" stakes series. Last year's E.P. Taylor winner Etoile was sent off as the 6-5 favorite off a 4th place finish in the Jenny Wiley (G1) at Keeneland. In to challenge her included 7-2 second choice Mutamakina, 3rd in the River Memories after finishing 6th in the New York Stakes (G2) at Belmont, and 4-1 third choice Blame Debbie, 5th in the R.G. Dick Memorial (G3) at Delaware Park.

Jockey David Moran sent 11-1 Alnaseem to the lead on the clubhouse turn through easy fractions of 25.98, 50.32, and 1:14.07 while pressed by Mutamakina and stalked by Blame Debbie. Turning for home, Alnaseem tired allowing Mutamakina to inherit the lead through 1 mile in 1:37.13. Mutamakina opened up a 2 length lead through 9f in 1:48.87. Etoile put in a strong late rally from 5th but Mutamakina and jockey Dylan Davis held her off to win by 1/2 a length in 2:01.26. It was a neck back to 7-1 Merveilleux third.
Results Chart 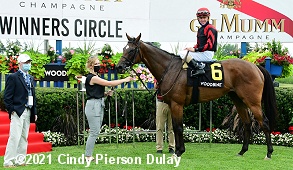 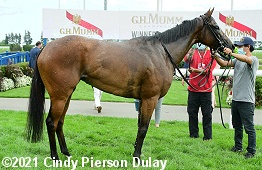 Left: Mutamakina in the winner's circle. Winning jockey Dylan Davis, celebrating his first stakes win at Woodbine said, "I saw the four-horse had some good speed. I broke well [and] was able to get a good stalking position right there. She did switch her leads down the backside a few times. She just needed a little bit of guidance. I had to get into her early. I was a little worried about that. Once she straightened up, she saw where she needed to go and she ran very strongly to the wire."

Right: Mutamakina gets hosed off after the race. Davis added, "I'm just happy to be back aboard her. It's just nice. She's progressing well. She's definitely a hard trier – you just got to know how to ride her. She always gives a good effort and (trainer Christophe Clement) had her ready today." 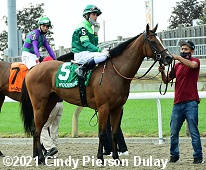 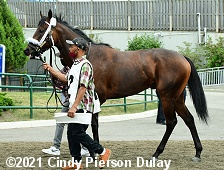 Right: Third place finisher Merveilleux walks over before the race. The Kevin Attard trainee improved her record to 4 wins, 3 seconds, and 2 thirds in 14 starts, earning $398,936 for owners Al and Bill Ulwelling. 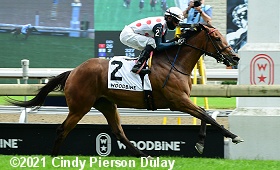 Kicking off the Saturday stakes quartet was the $150,000 Ontario Colleen Stakes (G3) for 3-year-old fillies going 1 mile around 1 turn of the turf. Misspell, 2nd in a Saratoga allowance last out, was the 8-5 favorite in the field of 7 over 5-2 second choice Our Flash Drive, winner of the Selene Stakes (G3), and 3-1 third choice Speightstown Shirl, second in an allowance last out after breaking her maiden at 4th asking.

Jockey Antonio Gallardo sent 26-1 longest shot Sweet Souper Sweet to the lead through fractions of 24.42 and 48.35 while pressed by Our Flash Drive and stalked by Speightstown Shirl. On the far turn Sweet Souper Sweet tired allowing Our Flash Drive take over through 3/4 in 1:11.84. In the stretch Our Flash Drive opened up a 1 1/2 length lead through 7f in 1:23.04, and confidently ridden by Patrick Husbands, held off late-running 7-1 Seasons to win by 1 1/2 lengths in 1:34.76. It was another 1 1/4 lengths back to Spieghtstown Shirl third, while favorite Misspell failed to rally and checked in 5th beaten 4 1/2 lengths.
Results Chart 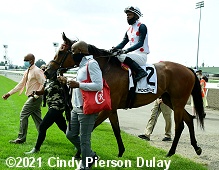 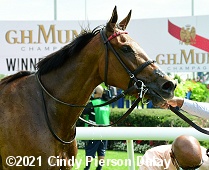 Left: Our Flash Drive heads to the winner's circle. Winning jockey Patrick Husbands said, "She's a relaxed horse. We had a couple of horses we worked – I was behind them about 10, 15 lengths and she was just wanting the green light. I said, 'No baby, no baby, no baby' and that was on Sunday. She's the type of filly that, what you want to do, she'll let you do. But she's pretty savvy racing and you can decide what to do with her."

Right: Our Flash Drive heads back to the barn after the race. Husbands added, "She doesn't like horses running with her; she doesn't like horses at all. I was getting out of the paddock early, and then getting to the gates she just started. And we just hope that she gets right past. I said 'Mark (Casse, trainer), this is a Breeders' Cup horse.' She just loved [the turf]."