Queen's Plate Day is one of the biggest racedays of the year at Woodbine and always attracts the largest crowd of the year. After light rainshowers in the morning, it was mostly cloudy at the historic track near Pearson International Airport with overcast skies and a high temp of 25 C (77 F). The E.P. Taylor turf course was rated firm (GoingStick reading 11.0) despite the rain. 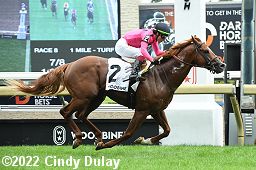 The $200,000 King Edward Stakes (G2) featured a field of 6 older horses going 1 mile on the turf in the local major prep for the Ricoh Woodbine Mile (G1) on September 17. After Shirl's Speight scratched, Connaught Cup (G2) winner Filo Di Arianna was sent off as the 6-5 favorite over 5-2 second choice March to the Arch, second in the Connaught Cup after finishing 11th in the Pegasus World Cup Turf (G1), and 13-2 third choice Haddassah, last year's Prince of Wales Stakes winner and here off an allowance win. 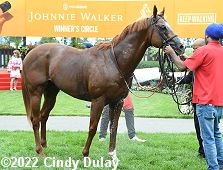 Right: Filo Di Arianna gets hosed off after the race. 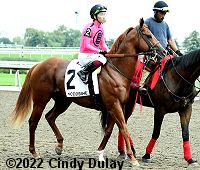 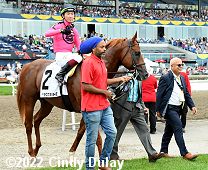 Right: Trainer Mark Casse and Filo Di Arianna head to the winner's circle after the race. 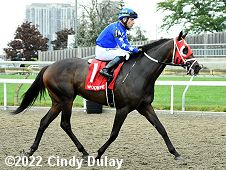 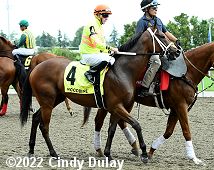 Right: Third place finisher Haddassah in the post parade. The Kevin Attard trainee improved his record to 3 wins, 0 seconds, and 5 thirds in 10 starts, earning $342,002 for owner-breeder Al and Bill Ulwelling. 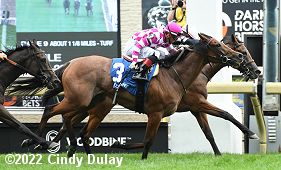 Immediately before the Queen's Plate, a field of 8 older fillies and mares contested the $200,000 Canadian Stakes presented by the Japan Racing Association (G2) at "about" 1 1/8 miles on the turf, the major local prep for the E.P. Taylor Stakes and the second race of Woodbine's "Ladies of the Lawn" stakes series. Nassau Stakes (G2) winner Crystal Cliffs was sent off as the 9-5 favorite over 2-1 second choice Flirting Bridge, second in the Dr. James Penny Memorial (G3) at Parx, and 9-2 third choice Fev Rover, second in the Dance Smartly Stakes (G2).

Jockey Luis Contreras sent 14-1 Angelou to the lead through fractions of 24.50 and 49.28 while pressed by Fev Rover and stalked by Flirting Bridge. On the far turn, Angelou tired allowing Fev Rover to gain a short lead through 3/4 in 1:12.71. Crystal Cliffs, 5th early under Rafael Hernandez, came out 6 wide to challenge and poked her head in front through 1 mile in 1:35.28, but Fev Rover, confidently ridden by Patrick Husbands, fought back in the duel to win by a nose in 1:47.33. It was another 3/4 length back to Flirting Bridge third.
Results Chart 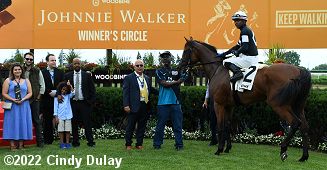 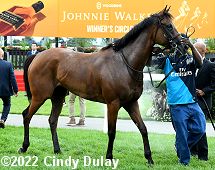 Left: Fev Rover in the winner's circle. Winning trainer Mark Casse said, "They race to the mirror and I thought our filly had her head down. Gutsy run by her coming back and great ride always by Patrick, 1500 wins together! Our filly just showed a lot of determination. I can still remember the first couple of horses I had Patrick ride. We used to ride him on the crazy ones. And when it started, everyone would ask, 'Why are you riding Patrick Husbands?' and I would say, 'Because he's a great rider,' and then it got to be 'Well, why aren't I riding Patrick Husbands?' We've had a lot of great victories over the years."

Right: Fev Rover gets hosed off after the race. Winning jockey Patrick Husbands said, "Last time Rafi (Hernandez) caught me at the bottom of the lane in my blind spot but today I made sure he didn't catch me there again. I made sure to get it going before he could get to me. 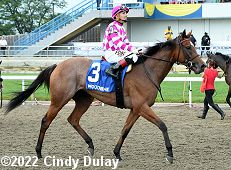 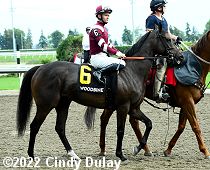 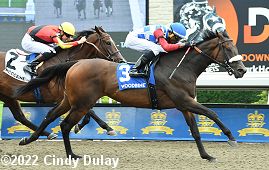 Kicking off the Saturday stakes quartet was the $125,000 Sweet Briar Too Stakes for older fillies and mares sprinting 6 1/2 furlongs on the Tapeta main track. hendrie Stakes (G3) runner-up Amalfi Coast was sent off as the 3-2 favorite in the field of 6 over 5-2 second choice Hazelbrook,winner of the Hendrie, and 11-4 third choice Hard Edge making her stakes debut off a second place finish in allowance company.

Jockey Eswan Flores sent Hard Edge to the lead exiting the chute through fractions of 23.05 and 46.05 while pressed by 19-1 Beyond Mybudget and stalked by Hazelbrook. Into the lane Hard Edge tired allowing Hazelbrook to take over through 3/4 in 1:09.88. Kept to task by Jason Hoyte, Hazelbrook inched away late to win by 3/4 length over Beyond Mybudget in 1:16.14. It was another 1/2 length back to 16-1 Golden Vision third, while favorite Amalfi Coast failed to rally and checked in 5th beaten 4 1/4 lengths.
Results Chart 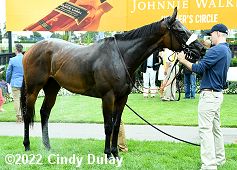 Left: Hazelbrook in the winner's circle. Winning jockey Jason Hoyte said, "This race went really well. The boss told me to get her going. When the two horses break on top of me, I just sat behind them it was all history from there. She's a big fighter. She don't give up at all, keeps trying."

Right: Hazelbrook gets hosed off after the race. Winning trainer Lorne Richards said, "Just a lot of luck. She's had some issues with her stomach and been to the clinic a few times. Jason's worked for me for a few years and she's kind of a tough filly so he ended up riding her and done a great job on her."