The 84th renewal of the $400,000 Prince of Wales Stakes, the second jewel in Canada's Triple Crown for 3-year-olds foaled in Canada, was run Tuesday evening at Fort Erie Racetrack over a distance of 1 3/16 miles on the main track. Conditions were excellent for late July at the "border oval", with mostly sunny skies and a race time temperature of 22C (71F), the main track rated fast and the turf course firm.

Just 5 made final entry with Alcatraz Stakes runner-up and Queen's Plate winner One Bad Boy sent off as the even-money choice. In to challenge him included 9-4 second choice Avie's Flatter, 2nd in the Plate after finishing 6th in the American Turf (G2) at Churchill Downs, and 4-1 third choie Skywire, 2nd in the Marine (G3) before disappointing in 11th as the favorite in the Plate. Tone Broke, 3rd in the Plate after finishing 2nd in the Sir Barton at Pimlico, was the 11-2 fourth choice, with Plate 4th place finisher He's a Macho Man the 13-1 longest shot.

Jockey Flavien Prat sent One Bad Boy to the lead first time by and he set fractions of 23.50, 48.02, and 1:12.59 while pressed by Avie's Flatter and stalked by Tone Broke. Turning for home, Avie's Flatter came out 3 wide and swept to the lead through 1 mile in 1:37.19, but Tone Broke, confidently ridden by Ricardo Santana Jr. came out widest of all and rallied late to win by 2 lengths in 1:56.56. It was a neck back to One Bad Boy third. 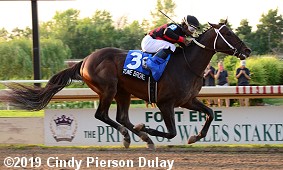 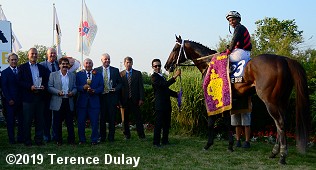 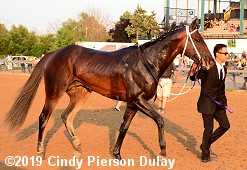 Left: Tone Broke in the winner's circle. Darren Fleming, assistant to winning trainer Steve Asmussen said, "(Next start) will be up to Steve and the owners to decide, but I kind of think he'll go ahead and finish out the Canadian Triple Crown. I think the further, the better. And he's versatile. He's been on the (Tapeta) one time, and he liked it. I don't think the turf will bother him a bit. I think he'd run on broken glass."

Right: Tone Broke heads back to the barn after the race. Fleming added, "He was a little anxious in the Queen's Plate, he didn't want to settle the first quarter of a mile. Today he was a lot smoother. (Sitting third) was kind of how it unfolded. He had a smooth break, he was very relaxed within himself. Ricardo just waited to see what everybody else was going to do. We knew he was going to finish up." 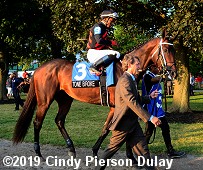 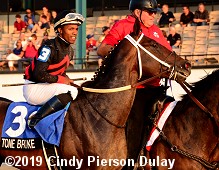 Left: Tone Broke in the paddock before the race.

Right: Tone Broke parades for the fans after the race. Winning jockey Ricardo Santana Jr., winning his first ever race at Fort Erie said, "He's just a horse that's a steady horse. The longer a race is, the better he is. He kept fighting today. As soon as I started asking him when we drove for home he kept running. I knew I had plenty of horse. He ran a really nice race today." 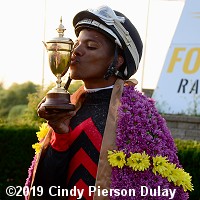 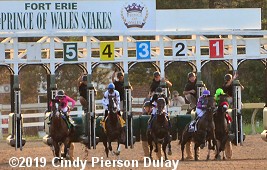 Left: Jockey Ricardo Santana Jr. celebrates with the trophy. Santana said, "He put himself in the spot he wanted to. I put him in a great spot. He broke really sharp today. He was nice and comfortable outside the speed. Turning for home, he gave me a nice kick."

Right: The horses break from the gate for the Prince of Wales with Avie's Flatter and One Bad Boy bumping a bit. Santana added, "A five-horse field, a lot of people think it's easy. I think it's tough because you don't have enough horses, you don't know what the other horses are going to do." 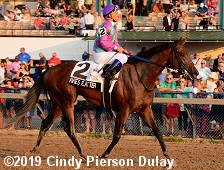 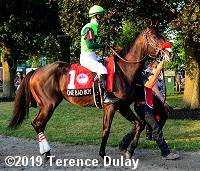 Left: Second place finisher Avie's Flatter returns after the race. Jockey Javier Castellano said, "The horse did everything I wanted of him today. He did everything perfect. He was second best today."

Right: Third place finisher and beaten favorite One Bad Boy in the paddock. Jockey Flavien Prat said, "He broke a step slow. I left out of there and I was fine on the lead, he was comfortable, he was relaxing well, but when I asked him to make a run he could not stay the same pace. It’s probably not his best surface and the start might have cost him a little bit too. He's not as good (on dirt) as he is on turf or Poly."