The 86th renewal of the $400,000 Prince of Wales Stakes, the second jewel in Canada's Triple Crown for 3-year-olds foaled in Canada, was run Tuesday afternoon at Fort Erie Racetrack over a distance of 1 3/16 miles on the main track. Conditions were typical for mid September at the "border oval", with partly cloudy skies and a race time temperature of 25.4 C (77.7 F) and the main track fast, however turf races were moved to the main after heavy overnight rain downgraded it to soft. Unlike in 2020, a limited number of spectators were allowed to be in the facility. Queen's Plate winner Safe Conduct was not entered by trainer Phil Serpe, opting to rest him until the Breeders' Stakes, thus denying Canada a Triple Crown winner and extending the drought to 18 years since Wando in 2003.

Filly Curlin's Catch was sent off as the 3-1 favorite, winless since the Suncoast Stkes at Tampa in February and fifth in the Woodbine Oaks last out. In to challenge her included 7-2 second choice Harlan Estate, seventh in the Queen's Plate after winning an allowance against open company and 4-1 third choice H C Holiday, third in the Plate after placing second in the Plate Trial.

Jockey MarkLee Buchanan sent 28-1 longest shot Ready at Dawn to the lead first time by and he set fractions of 23.67, 47.30, and 1:11.53 while pressed by 13-2 Haddassah and stalked by 8-1 Tidal Forces. Turning for home, Ready at Dawn tired badly and dropped back to last, allowing Haddassah to gain a short lead through 1 mile in 1:36.97. Harlan Estate, 4th early, came out 6 wide to challenge but Haddassah, confidently ridden by Gary Boulanger, held him off to win by 1/2 a length in 1:56.15. It was another 1 3/4 lengths back to 9-2 fourth choice Keep Grinding third, while favorite Curlin's Catch raced 7th early and failed to rally checking in 5th beaten 8 1/2 lengths. 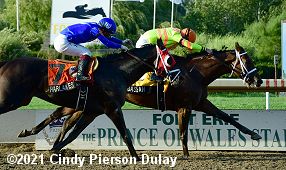 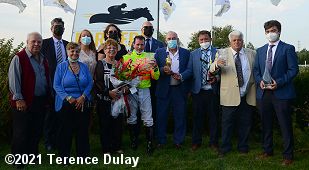 Left: Haddassah in the winner's circle. Winning trainer Kevin Attard, who trains the first 2 finishers said, "He's trained really well since and he really matured since the Queen's Plate - he's more relaxed in his training in the mornings. We elected to take him off of Lasix for the Queen's Plate and he ran without the medication today as well just because I thought it was reacting negatively to him. He put it all together today."

Right: The trophy presentation for the Prince of Wales Stakes 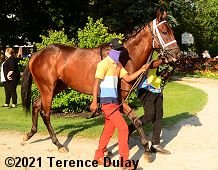 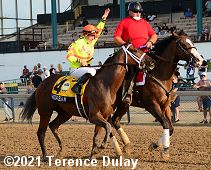 Left: Haddassah in the paddock before the race. Winning jockey Gary Boulanger, celebrating his first Prince of Wales win said, "Kevin said he might be the most talented three-year-old he has, but he hadn't mentally put it together. Today, he showed he did. He's a horse that's really come into himself."

Right: Haddassah returns after the race. Boulanger added, "This horse showed us that he's really starting to mature. He sat a lot easier than he did at The Plate. At the Plate, I had to kind of strangle him back a bit. Today he swapped his lead late but it didn't cost him any momentum. He was determined so (Harlan Estate) wasn't getting by me." 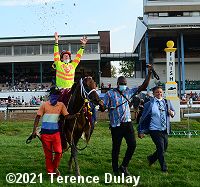 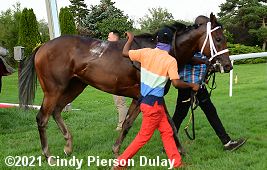 Left: Gary Boulanger tosses flowers and Haddassah heads to the winner's circle. Attard added, "As a two-year-old he broke his maiden first time out. We were really optimistic going into his three-year-old campaign. He had a real legitimate chance of winning the Queen's Plate, but it just wasn't good enough. But he's trained really well since. He seems to have really matured of late."

Right: Haddassah heads back to the barn after the race. 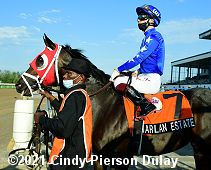 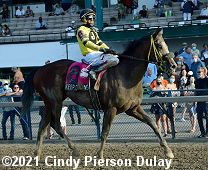 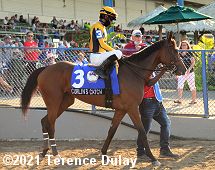 Left: Fifth place finisher and beaten favorite Curlin's Catch heads out for the post parade. The Mark Casse trainee has a record of 2 wins, 1 second, and 1 third in 9 starts, earning $146,543 for owner Breeze Easy LLC.

Right: The horses break from the gate for the Prince of Wales Stakes. 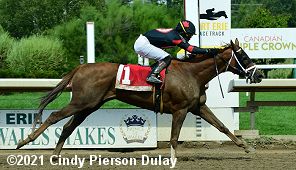 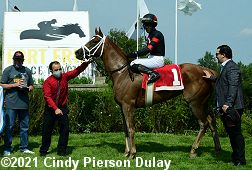 Kicking off the Tuesday afternoon stakes quintet was the $80,000 Rondeau Bay Stakes for Ontario-sired 3-year-old fillies sprinting 6 furlongs on the main track. 9-1 Reine Secret set the pace of 22.36 and 45.85 while pressed by 19-2 Benny's Button and stalked by 16-1 Gilent Guroo. In the stretch, Benny's Button gained a short lead through 5f in 58.23 but 3-1 second choice Red Equinox, 4th early under Chris Husbands, rallied 4 wide to win by a length over late-running 9-10 favorite Sunsprite in 1:11.01. It was another length back to Benny's Button third.

Trainer Jamie Attard, celebrating his first stakes win, said, "It's something you dream about all the time when you're growing up and thinking about getting into this business and learning from someone like my father (Canadian Hall of Famer Sid Attard)." 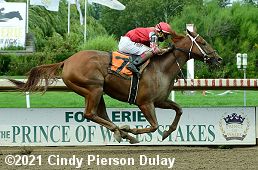 The $80,000 Lake Erie Stakes featured a field of 8 Ontario-sired 3-year-olds also sprinting 6 furlongs. 7-5 favorite Forest Survivor was quickest away through an opening quarter of 22.42 before 28-1 Blind Trust took over on the far turn through a half in 44.88. Turning for home, 3-2 second choice Red River Rebel, 5th early, swept 7 wide to the lead through 5f in 56.78. Kept to task by Rafael Hernandez, Red River Rebel drew off to win by 5 lengths over Blind Trust in 1:09.55. It was a neck back to 19-1 Savvy Layla third, while favorite Forest Survivor checked in 5th beaten 6 1/4 lengths. 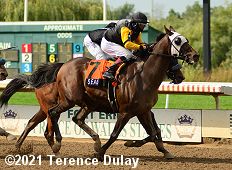 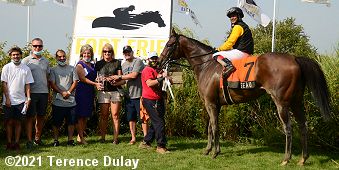 Winning jockey Sunny Singh said, "He was pretty cool the first time I sat on him a few weeks ago, and he just did everything on his own and did it all right. He is just an awesome animal to be around, and John (Simms, trainer) and his crew did a great job." 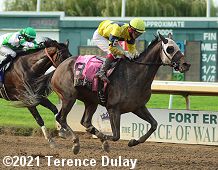 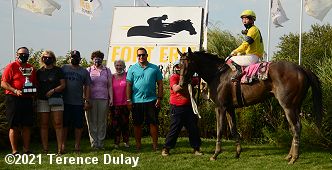