The Belmont Stakes is the oldest of the Triple Crown races, and at 1 1/2 miles on the dirt, is a dinosaur with so few main track events carded at twelve furlongs these days. With the short five week span for three gruelling races under scale weight of 126 pounds over three very different tracks and three different distances, it takes a very special horse sweep the series. So much so that only 13 horses have completed the task, including Justify one year ago.

Thanks to injuries, poor performance in preps, or just plain lack of ability at the distance, the Belmont often gets a short field of horses, even if the race is wide open with no Triple Crown on the line and no obvious standout. While traffic trouble, a major issue in the Kentucky Derby, shouldn't be as much of an issue here, once again 3-year-olds are being asked to do something they've never done and conditioning will be key. In addition Belmont Park's huge 1 1/2 mile oval will be unfamiliar to most horses so we favor those which have had a sharp past race over it. Note that although the Belmont oval is much larger than those at Churchill and Pimlico, given the placement of the winning post it has a shorter home stretch. Major factors which separate the likely winners of the Belmont are weighed out in this analysis, as we did for the Derby and Preakness fields.

Like the Kentucky Derby and the Preakness Stakes, we have compiled some of the more profitable angles used to select a Belmont Stakes winner in recent years, and applied them to the possible entrants. Some novice horseplayers mistakenly believe a long race immediately favors closers when in fact the Belmont favors stalkers, so we prefer horses labeled "E/P" or "P" in BRIS past performances (by comparison "E" types are confirmed front-runners while "S" are deep closers). As well, the 4.00 Dosage Index angle is stronger in the Belmont than in the Derby where it's mostly used; here, we set the upper limit on Dosage at 3.00 and Center of Distribution at 0.8.

The Belmont favors horses who have zero points in the Solid and Professional wings of their dosage profiles, which is counterintuitive as you'd expect to see indicators of stamina for the gruelling 12 furlong trip, but "double zero" horses get an extra point. As we have for the Derby and Preakness, horses that are tied in points will be listed in alphabetical order. It is worth noting that no horse scored the maximum possible score; each has his share of knocks, as is explained below. You can view the past performances of these horses free here from BRISnet.

Where there is a tie in points we will list the horses in alphabetical order. The first two horses were a tie: 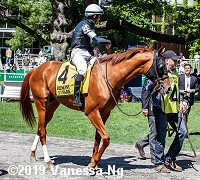 Sir Winston is one of the latecomers to the Triple Crown wars and based on our analysis, he belongs in the Belmont. However, unlike the Derby and Preakness analyses, no horse came close to "sweeping" the factors; every horse here failed to satisfy at least 6 of the 15 factors we used, so there is no "shoo in" or "lock". Sir Winston comes to the Belmont off a 2nd place finish in the Peter Pan, the local prep for the Belmont, earning him a sharp prep as well as a sharp race over the Belmont track. He has raced 4 times this year, which is within our preferred range, is racing off a 4 week layoff (which is the maximum), his 101 BRIS figure in the Peter Pan meets the par requirement of 100 and was a new career top, and he satisfies all three Dosage requirements. Among the negatives, he tends to rally from off the pace, he skipped both Derby and Preakness, has not won a stakes this year, and has too many starts as a juvenile with 5 (the target range is a narrow 1-3 starts). 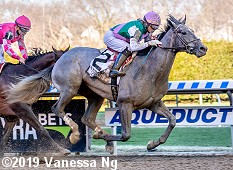 Tacitus is one of several who raced in the Derby (where he finished 4th but placed 3rd, a sharp prep) and skipped the Preakness. His 103 speed figure when he won the Wood Memorial is the top route figure earned by this field (so he and another horse each earned a point there), and his career debut qualifies as a sharp race at Belmont Park, a close 4th (sharp is defined as in the money or within 4 lengths of the winner, note that he was only beaten 3 1/4 lengths in the Derby). He generally stalks the pace, and has met the speed figure par. However, on Dosage his index is 3.31, just above the 3.0 cutoff, and he lacks the "double zero" but does qualify on center of distribution (every horse qualified on this factor). As well he he coming off a 5 week layoff and does not have enough starts this year with just 3.

The next 2 horses tied in points and are listed alphabetically: 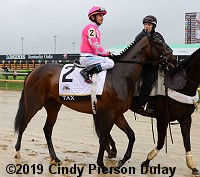 Tax like Tacitus comes here from the Wood and Derby, bypassing the Preakness, and can stalk the pace. He qualifies on Dosage other than the double zero factor, and finishing 15th in the Derby 15 lengths behind was not a sharp prep. He also had the 103 top fig. On the downsides he skipped the Preakness, is short on race experience this year, and regressed in the Derby (we prefer a new career best figure last out). He also has never raced over the 1 1/2 mile oval at Belmont Park. 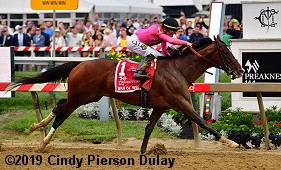 War of Will comes here off his Preakness win after his 8th place finish (moved up to 7th) in the Derby due to interference from Maximum Security. This earns him a sharp prep inside 4 weeks and 5 starts this year, well within the preferred range. His dosage index and center of distribution are also in range, but he lacks the double zero, his Preakness win was not a career best, nor has he ever run a triple digit speed figure (his best was a 96 winning the Risen Star, while his Preakness rated 95). In addition the Mark Casse trainee will be making his Belmont Park debut on Saturday.

The next 2 horses tied in points and are listed alphabetically: 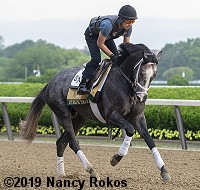 Intrepid Heart has the least experience in the field with just 3 starts, all ths year and non in Triple Crown company, and no stakes wins. Despite these obvious negatives, he rated quite highly because he meets several other factors. He comes here off a 3rd place finish in the Peter Pan, giving him a sharp prep 4 weeks out as well as a sharp race over Belmont Park, and the 96 BRIS figure he earned that day was a new career top. He lacks the double-zero, has never run a 100+ figure, and with no starts last year and just 3 this year, did not meet either range. 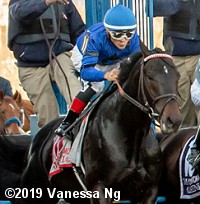 Joevia is another new shooter in the Triple Crown war much like Intrepid Heart, but earned his points on a much different set of factors. He has enough starts at 2 and 3, had a sharp prep 4 weeks out and a stakes win this year (the Long Branch Stakes at Monmouth). On dosage he has the double zero and a center of distribution under 0.8. However his index of 3.80 does not meet the 3.00 par, his best figure was a 99 earned in February (so the 97 at Monmouth was not a new top), he is a confirmed front-runner likely to set the pace, and he has never raced at Belmont.

The next 3 horses tied in points and are listed alphabetically: 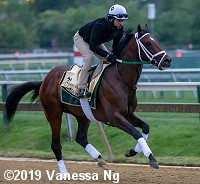 Bourbon War is a late addition to the Belmont field but did race in the Preakness where he finished a distant 8th, clearly not a sharp prep, with the 85 figure earned there not meeting par nor a career best. He still lacks a stakes win, has never run a 100+ figure, and has never raced at Belmont, despite being stabled there. He is also a deep closer which is not preferable in the Belmont despite the distance. He does have enough starts at 2 and 3 and his dosage index qualifies, but he lacks the double zero. 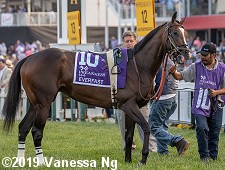 Everfast was the surprise runner-up in the Preakness at 29-1 odds, so he is coming here off a sharp prep inside 4 weeks and has Trple Crown experience. He has 6 starts this year, just at the upper limit, but raced 5 times last year, which is more than the maximum. The 94 BRIS figure earned at Pimlico matched his career best so was not a new top nor has he run a 100+ figure so far. He may have the double zero but is dosage index of 3.67 is above the limit. 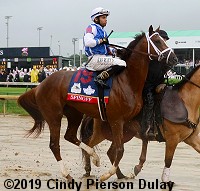 Spinoff finished 18th in the Derby then skipped the Preakness, so he did not have a sharp prep and the 80 BRIS figure earned at Churchill is not a career top. He did make enough starts at 2 but his 3 starts this year is just short of the preferred range of 4-6. He did qualify on all three dosage factors, and he did meet the speed figure par when he ran a 102 in the Louisiana Derby. He usually races on or close to the lead rather than stalk, he does not have any stakes wins, and not only was his Derby a poor effort it is 5 weeks back. 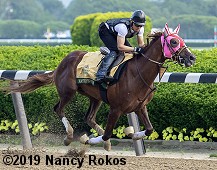 Master Fencer placed last in our analysis. The Japanese invader to the Triple Crown remained at Keeneland after he finished 7th in the Derby, clearly not a sharp prep and 5 weeks out. He tends to close from off the pace, has never run a 100+ figure lifetime, still lacks a stakes win this year (he started 2019 with an allowance win), and the 95 he earned at Churchill wasn't a career best. His dosage index passes, but he lacks the double zero.