The $1 million Ricoh Woodbine Mile (G1) celebrated its 26th renewal on Saturday afternoon. Run at 1 mile around one turn of the E.P. Taylor Turf Course, it features some of the best turf milers in North America and Europe looking for an automatic entry into the Breeders' Cup Mile at Keeneland under the Breeders' Cup Challenge "Win and You're In" promotion. Conditions were typical for the last weekend of the summer with partly cloudy skies and a post time temperature of 23 C (74 F). The Taylor course was rated firm with a GoingStick reading of 11.1.

A field of 11 made final entry with no scratches, with last year's Breeders' Cup Juvenile Turf (G1) winner Modern Games sent off as the 3-4 favorite off his second place finish in the Sussex Stakes (G1) at Goodwood. In to challenge him included 11-4 second choice Ivar, third in last year's Breeders' Cup Mile (G1) before winning the Jonathan Schuster Memorial at Horseshoe Indianapolis, and 10-1 third choice Wakanaka, the lone distaffer in the field off her win in the Dance Smartly (G2).

Jockey Rafael Hernandez sent 19-1 Get Smokin to the lead down the backstretch through fractions of 23.08 and 45.79 while pressed by 51-1 War Bomber and stalked by 86-1 longest shot Mighty Heart. Turning for home Get Smokin tired as War Bomber inherited the lead through 3/4 in 1:09.39 before also tiring. Favorite Modern Games, 8th early under William Buick, came out 6 wide into the stretch and powered to a 2 length lead through 7f in 1:20.98. Kept to task by Buick, Modern Games drew off to win by 5 1/4 lengths over late-running Ivar in 1:32.77. It was a neck back to 25-1 Finest Sound third. 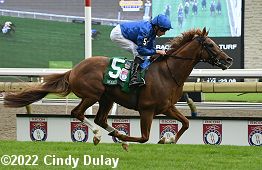 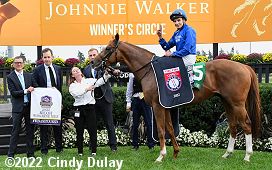 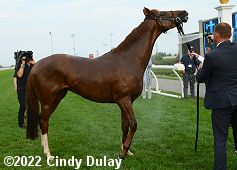 Left: Modern Games in the winner's circle. He is the first 3-year-old to win the Woodbine Mile. Alex Merriam, assistant to winning trainer Charlie Appleby said, "He's a lovely horse, you know. Obviously, he won the Breeders' Cup Juvenile Turf last year, and he's got some solid form in Europe. He's just a lovely horse and I'm delighted."

Right: Modern Games gets hosed off after the race. 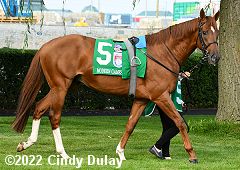 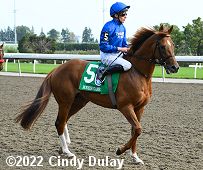 Left: Modern Games in the paddock before the race. Winning jockey William Buick said, "He was back in the pack a little bit and he had to make a bit of room. But you saw he has that speed for a mile, you know, that you need to get yourself out of trouble, so, he picked up really fast and really good. It was a very good performance." 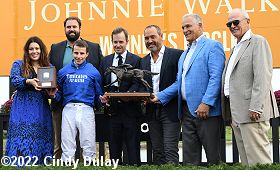 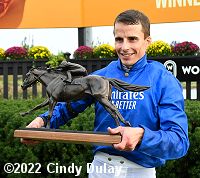 Left: The trophy presentation for the Woodbine Mile.

Right: Jockey William Buick with the Woodbine Mile trophy. Buick added, "He's gotten bigger and he's a very strong horse. Not that he wasn't last year, but he's gotten bigger and stronger this year. He just retains all the ability in the world. He's a real fast-ground specialist. The faster the ground, the better for him. When he changes gears, he's got a lot of speed. He's a real fast miler. Very excited (to try to win the Breeders' Cup Mile). Of course, he's obviously a Juvenile Turf winner already last year, so you know he loves North American racing. We are very much looking forward to it." 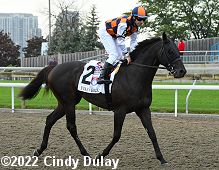 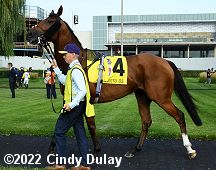 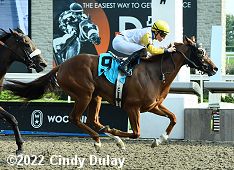 Immediately before the Woodbine Mile, a field of 9 older fillies and mares contested the $150,000 Seaway Stakes (G3), a 7 furlong sprint on the Tapeta main track. Lady Speightspeare was sent off as the 7-5 favorite off wins in the Nassau (G2) and Trillium (G3) Stakes. In to challenge her included 8-5 second choice Souper Sensational, a close second in both the Royal North (G3) and Caress Stakes (G3), and 5-1 third choice Dreaming of Drew, second in the Trillium.

74-1 longest shot Hai Bobbi and 64-1 Emmeline dueled for the lead down the backstretch and around the turn through fractions of 22.82 and 45.46 while stalked by 27-1 Nazuna and Lady Speightspeare. Turning for home the pacesetters tired as Lady Speightspeare inherited the lead through 3/4 in 1:09.37. Kept to task by Emma-Jayne Wilson, Lady Speightspeare outfinished late-running 9-1 fourth choice Hazelbrook to win by 3/4 length in 1:21.79. It was another 1/2 length back to Souper Sensational third. 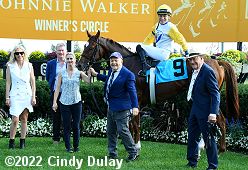 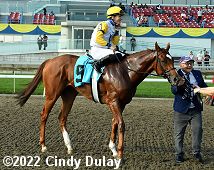 Left: Lady Speightspeare in the winner's circle. Winning jockey Emma-Jayne Wilson said, "This filly is just stellar. She steps up every single time. She knows what the game is all about. I'm proud to be her partner, I know her like the back of my hand, she gives it everything she can every single time." Owner-breeder Charles Fipke added, "She's never lost at Woodbine! I just feel so lucky to have a gorgeous horse and a great trainer."

Right: Lady Speightspeare returns after the race. Winning trainer Roger Attfield said, "She's a fighter. She's an interesting filly, sometimes she's not a good work filly and you're not quite sure where you are with her but in the afternoon she puts it all together." 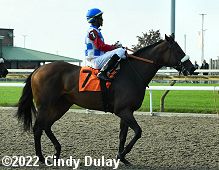 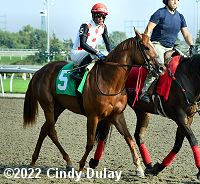 Summer and Natalma Stakes also on the card.