The $1 million Ricoh Woodbine Mile (G1) celebrated its 24th renewal on Saturday afternoon. Run at 1 mile around one turn of the E.P. Taylor Turf Course, it features some of the best turf milers in North America and Europe looking for an automatic entry into the Breeders' Cup Mile at Santa Anita under the Breeders' Cup Challenge "Win and You're In" promotion. Conditions were typical for the last weekend of the summer with partly cloudy skies and a daytime high of 13.6 C (56.5 F). The Taylor course was rated firm GoingStick reading of 11.8) while the inner turf was closer to hard (GoingStick 12.8). As has been the case for the entire racing season so far in Canada, fans were not allowed to attend, with only essential officials, horsemen, and owners present, however a new record handle of $3.1 million was bet on the Woodbine Mile (the 9th race on Saturday's card).

A field of 8 made final entry with no scratches, with 2019 Preakness (G1) winner War of Will sent off as the 2-1 favorite off his win in the Maker's Mark Mile (G1) at Keeneland. In to challenge him included 5-2 second choice March to the Arch, winner of the King Edward Stakes (G2) after finishing 6th in the Wise Dan (G2), and 4-1 third choice Shirl's Speight, a 3-year-old making his 3rd lifetime start after winning his debut and then the Marine Stakes (G3) both in July. Canada's 2019 Horse of the Year Starship Jubilee was the 11-2 fourth choice off her Ballston Spa (G2) win followed by a 4th place effort in the Diana (G1) both at Saratoga.

Jockey Steven Bahen sent 12-1 Admiralty Pier to the lead down the backstretch through fractions of 23.66, 46.14, and 1:09.12 while pressed by 7-1 Value Proposition and stalked by Shirl's Speight and Starship Jubilee. Turning for home Admiralty Pier stubbornly held on through 7f in 1:20.45 but was tiring badly. Justin Stein moved Starship Jubilee out for room and she charged ahead to win by a length over deep closer March to the Arch in 1:32.06. It was another 3/4 length back to favorite War of Will third. 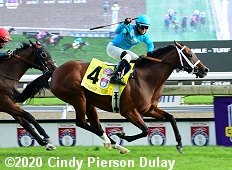 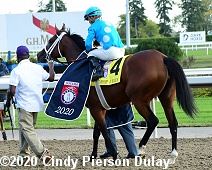 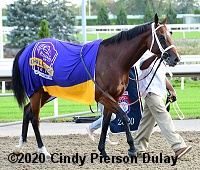 Left: Starship Jubilee in the winner's circle. Winning trainer Kevin Attard, winning his first Woodbine Mile said, Just an unbelievable feeling. This mare doesn't get the respect she deserves. She's a winner of 18 or 19 races out of 38 starts, I was really disappointed to see her at 6-1 on the board, just kind of forgotten about. Time after time she comes up and proves that she's a top horse in North America." She is the 3rd mare to win the Woodbine Mile after Ventura and Tepin, and the oldest winner at age 7.

Right: Starship Jubilee heads back to the barn in her new winner's blanket after the Woodbine Mile. Attard added, "I'm just going to enjoy the moment right now but it's obviously a special feeling to know that this race has produced so many horses that have gone on to win the Breeders' Cup so I'm really ecstatic right now and that's somewhere we've been aiming to go all year long. This is just one step closer." 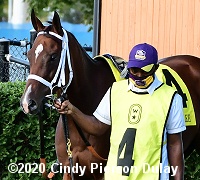 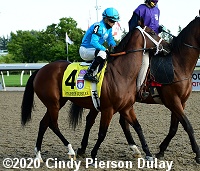 Left: Starship Jubilee in the paddock before the race. Winning jockey Justin Stein said, "Sitting inside the 3/8 pole, around the 5/16ths pole I had tons, and I waited for a chance to tip her out and ask her to run. She's so honest and wants to win more than anybody else out there. I watched her replays, she's just gritty. She just waited for her cue and took off like a scalded cat. She was gone."

Right: Starship Jubilee in the post parade. Stein added, "I paid attention to what other people had said. I expected War of Will to be up there. Instead he was on my flank and we were in company down the backside, and Shirl's Speight was up there and Admiralty Pier. It kind of shaped the way I thought. I was in great position and I was just happy with the trip I got." 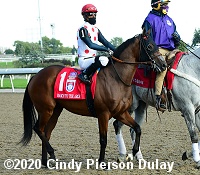 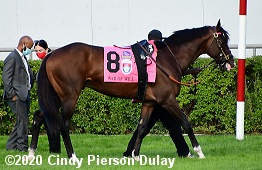 Left: Second place finisher March to the Arch in the post parade. The Mark Casse trainee improved his record to 7 wins, 3 seconds, and 3 thirds in 24 starts, earning $849,705 for owner-breeder Live Oak Plantation.

Right: Third place and beaten favorite War of Will in the paddock before the race. The Mark Casse trainee improved his record to 5 wins, 1 second, and 3 thirds in 17 starts, earning $1,871,803 for owner Gary Barber. 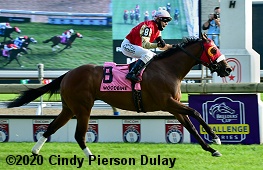 An hour before the feature, a field of 9 older horses contested the $125,000 Singspiel Stakes (G3), a 1 1/4 mile trip over the Taylor course as the major local prep for the Northern Dancer Turf (G1) (note that the Pattison Canadian Interational was cancelled for 2020 and will return next year). Standard Deviation was sent off as the 3-1 favorite off a 7th place finish in the United Nations (G1) at Monmouth. In to challenge him included last year's winner 7-2 second choice Tiz a Slam off 6th place finishes in the Louisville Stakes (G3) and Seagram Cup (G3), and 4-1 third choice Nakamura, 3rd in the Elkhorn (G2) at Keeneland. 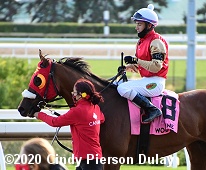 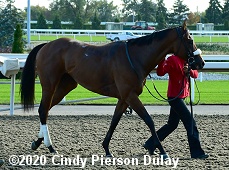 Left: Count Again heads to the winner's circle. Winning jockey Luis Contreras said, "I was in the perfect position the whole way. Just before the turn, a horse came on the outside and made a little move and gave him a bit of trouble but my horse was nice and relaxed. I just held him a little bit longer…when I turned for home I was loaded with so much horse. Last time he ran with first-time blinkers on, so I just got beat really bad at the end, by a (neck)," said Contreras. "Today they cut the blinkers back and I think that made a lot of difference."

Right: Count Again heads back to the barn after the race. 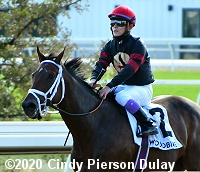 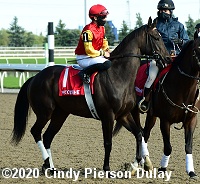 Right: Third place finisher Say the Word in the post parade. The Gail Cox trainee improved his record to 4 wins, 2 seconds, and 4 thirds in 24 starts, earning $281,520 for owner-breeder Sam-Son Farm. 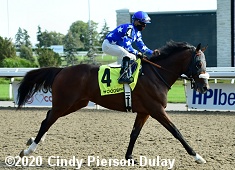 Sixth place finisher and beaten favorite Standard Deviation takes off during the post parade. The Graham Motion trainee has a record of 3 wins, 2 seconds, and 4 thirds in 14 starts, earning $540,280 for owner Al Shahania Stud America. 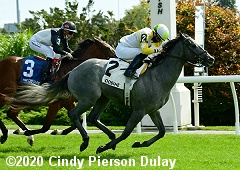 Kicking off the stakes quartet on Saturday was the $135,000 Ontario Racing Stakes for 2-year-olds sprinting 5 furlongs on the inner turf course. Colonial Downs debut winner Amsden was sent off as the even-money choice in the field of 6 over 5-2 Sky's Not Falling, 3rd in the Skidmore at Saratoga, and 9-2 Souper Classy, a debut winner on August 27.

Amsden and 6-1 fourth choice Quick Tempo dueled down the back and around the turn through fractions of 21.43 and 45.09 while stalked by Souper Classy. Turning for homne, the pacesetters tired badly as 41-1 longest shot Credit River, last early under Emma-Jayne Wilson, closed with a rush on the outside to pass the rest of the field in the final furlong to win by 3/4 lengths over Sky's Not Falling in 57.06. It was another 1 1/4 lengths back to Souper Classy third while Amsden checked in last of 6. A steward's inquiry into the stretch led to Quick Tempo being disqualified from 5th and placed 6th behind favorite Amsden for interference. 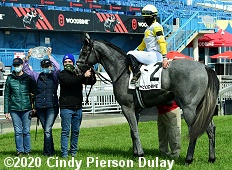 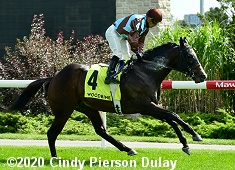 Left: Credit River in the winner's circle. Winning jockey Emma-Jayne Wilson said, "It was a tough task and a tall task – I mean, a first-time starter – but he showed his talent today. I just let him get his legs, he got away from there okay, but he's not nearly as quick as those guys were early and I didn't expect him to be, so when I gathered him up and asked him to pick it up he didn't even hesitate, he was all business. This horse comes by his talent honestly. His mom [Like a Gem] was a multiple stakes winner that I used to ride here, and his [half-sister, Hard Not to Like] was a Grade 1 winner. So to see him flourish on the turf is no surprise." 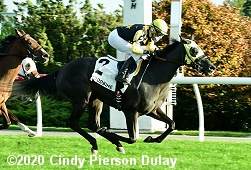 Closing out the stakes action was the $135,000 Woodbine Cares Stakes for 2-year-old fillies also sprinting 5 furlongs on the inner turf. Catch a Glimpse Stakes 3rd place finisher Illegal Smile was the 2-1 choice over 7-2 Souper Munnings, a maiden winner at 2nd asking, and 9-2 Dirty Dangle, a debut winner last out.

Souper Munnings and 6-1 Chatelet dueled down the back and around the turn through fractions of 22.14 and 45.15 while stalked by 5-1 fourth choice Rocket Reload. Turning for home, jockey Sheena Ryan, 4th early aboard Dirty Dangle, came out wide and rallied well to win by 1 1/4 lengths over favorite Illegal Smile in 56.82. It was another head back to Rocket Reload third. 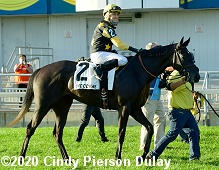 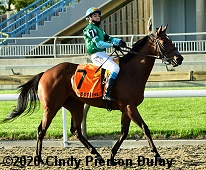 Left: Dirty Dangle heads to the winner's circle. Winning jockey Sheena Ryan said, "I had so much horse going around the turn and I'm like as soon as we get a clearing… I had lots of horse, she ran really well and I'm really impressed with her." Trainer Ralph Biamonte added, "We always thought she was pretty good. And Sheens did an excellent job both times. Today she looked like she got into a little bit of trouble, she kept her composure, moved to the outside, and away she came."