The $1 million Ricoh Woodbine Mile (G1) celebrated its 25th renewal on Saturday afternoon. Run at 1 mile around one turn of the E.P. Taylor Turf Course, it features some of the best turf milers in North America and Europe looking for an automatic entry into the Breeders' Cup Mile at Del Mar under the Breeders' Cup Challenge "Win and You're In" promotion. Conditions were typical for the last weekend of the summer with sunny skies and a post time temperature of 23.2 C (73.8 F). The Taylor course was officially rated good, but with a 10.6 GoingStick reading, would be called "good-to-firm" in Europe. A field of 10 made final entry with no scratches, with Wise Dan (G2) winner Set Piece sent off as the 8-5 favorite off his second place finish in the Fourtstardave Handicap (G1). In to challenge him included 7-2 second choice Raging Bull, winner of the Maker's Mark Mile (G1) but 2nd in the Poker (G3) and 6th in the Fourtstardave, and 7-1 third choice Ride a Comet, 3rd in the Wise Dan last out.

Jockey Daisuke Fukumoto sent 17-2 fourth choice Town Cruise to the lead out of the gate and he set fractions of 24.08, 47.10, and 1:10.41 while pressed by 27-1 Duke of Hazzard and stalked by 63-1 longest shot Change of Control. Turning for home, Town Cruise continued to lead by 2 lengths through 7f in 1:22.37. 13-1 Space Traveller, 4th early under David Moran, and Raging Bull, 8th early under Frankie Dettori, put in futile late rallies to no avail as Town Cruise finishing 2 1/4 lengths ahead under a hand ride in 1:35.14. It was another 3/4 length from Space Traveller to Raging Bull third, while favorite Set Piece trailed early and failed to rally through traffic to finish 7th beaten 4 3/4 lengths. 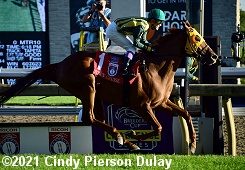 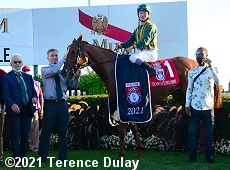 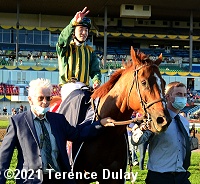 Left: Town Cruise in the winner's circle. Winning owner-trainer Brandon Greer said, "It feels a little surreal at the moment, but I'm absolutely thrilled with him. This horse is amazing. I absolutely love him. I could see him digging in, that's something that he's been able to do very well this year," he continued. "Dig in the late stages, even though he's been in the front. I found it a little difficult to believe right until the final 1/16 and then I can see the other horses just didn't have enough to catch up there."

Right: The connections celebrate with the Woodbine Mile trophy. Asked if he would run next in the Breeders' Cup Mile, Greer added, "Well, I'm going to have to ask someone very important first, the horse. We're going to take a couple of days and just take it slow, take it easy, see how everything is after the race, and then I'll ask the horse and see what he wants to do." 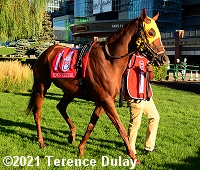 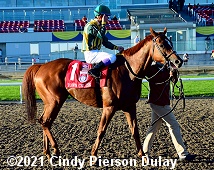 Left: Town Cruise in the paddock before the race. Winning jockey Daisuke Fukumoto said, "This is fantastic. I am still in awe, it's an unbelievable feeling. Winning a Grade 1 is my dream, and I got a good horse this year so far. He's been good all year so far. For me, I am just crazy happy. I had pretty good confidence. I just knew for a shot I had to take (the) front. He went good, I took the lead, and wait and wait and he finished well." 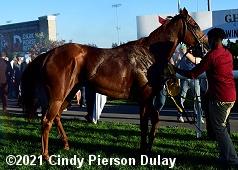 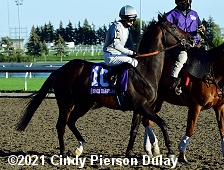 Left: Town Cruise gets hosed off after the race. 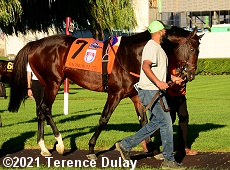 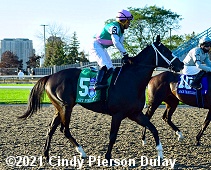 Left: Third place finisher Raging Bull in the paddock before the race. The Chad Brown trainee improved his record to 7 wins, 4 seconds, and 4 thirds in 21 starts, earning $1,630,044 for owner Peter Brant.

Right: Seventh place finisher and beaten favorite Set Piece returns after the race. The Brad Cox trainee has a record of 9 wins, 2 seconds, and 1 third in 18 starts, earning $541,573 for owner-breeder Juddmonte Farms. 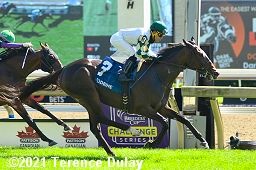 Four hours before the feature, a short field of 5 fillies and mares contested the $250,000 Canadian Stakes (G2) presented by the Japan Racing Association, an about 1 1/8 mile trip around one turn of the Taylor course as the major local prep for the E.P. Taylor Stakes (G1) to be run on October 17. R.G. Dick Memorial Stakes (G3) fourth place finisher La Dragontea was sent off as the 6-5 favorite off an allowance win at Saratoga. In to challenge her included 5-2 second choice Our Secret Agent, 2nd in the Seaway (G3) after finishing third in the Nassau (G2), and 3-1 third choice Merveilleux, a close third in the Dance Smartly (G2) last out.

Jockey Antonio Gallardo sent Our Secret Agent to the lead exiting the chute and she set easy fractions of 26.00, 51.98, and 1:15.99 while pressed by La Dragontea and stalked by Merveilleux. Turning for home, Our Secret Agent tired as La Dragontea took over the lead through 1 mile in 1:38.45. Kept to task by Joel Rosario, La Dragontea pulled away to win by a length over late-running 7-1 fourth choice Court Return in 1:50.33. It was another 1/2 length back to 15-2 longest shot Barkin third. 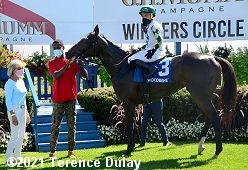 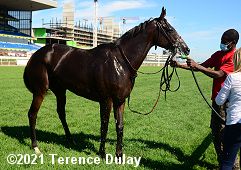 Left: La Dragontea in the winner's circle. Winning jockey Joel Rosario said, "I was just laying close to them, she was very relaxed, very nice, and I would just want to wait for the right time to move. It's a little different when you don't have a lot of horses in a race, so we're just trying to learn something."

Right: La Dragontea get hoses off after the race. Rosario added, "She looked like she was getting over nice and seemed really in control for her. She was enjoying what she was doing out there. That makes it easy for me." 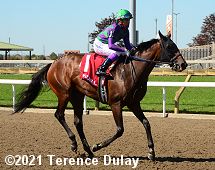 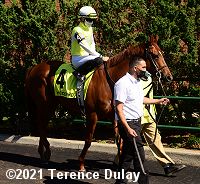 Right: Third place finisher Barkin heads out to the track before the race. The Catherine Day Phillips trainee improved her record to 2 wins, 2 seconds, and 2 thirds in 6 starts, earning $108,048 for owner-breeder Willow Pond Stable.