Breeders' Cup Challenge Series "Win and You're In" day at Woodbine also included two Grade 1 races for 2-year-olds on the turf, each contested at 1 mile around 1 turn of the E.P. Taylor Turf Course. Conditions were typical for the last weekend of the summer with partly cloudy skies and a post time temperature of 23 C (74 F). The Taylor course was rated firm with a GoingStick reading of 11.1.

Kicking off the Saturday stakes quartet, a field of 7 two-year-old males contested the $500,000 Pattison Summer Stakes (G1) looking for automatic entry into the Breeders' Cup Juvenile Turf at Keeneland on November 4. Mysterious Night was sent off as the 1-2 favorite off his win in the Prix Francois Boutin (G3) at Deauville. In to challenge him included 9-2 second choice Appraise, fourth in the Skidmore Stakes after winning his debut, both at Saratoga, and 19-4 third choice Philip My Dear, undefeated in 2 starts including the Soaring Free last out.

Jockey Rafael Hernandez sent 27-1 longest shot Ninetyfour Expos to the lead through fractions of 24.17, 47.83, and 1:11.76 while pressed by 17-1 Chiseler and stalked by 26-1 Stayhonor Goodside. Into the lane jockey William Buick sent favorite Mysterious Night 3 wide for room and he easily swept to the lead through 7f in 1:23.25. Kept to task by Buick, Mysterious Night drew off to win by 5 3/4 lengths over late-running Appraise in 1:34.98. It was another 1 1/4 lengths back to Philip My Dear third. 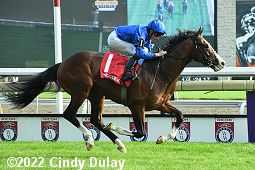 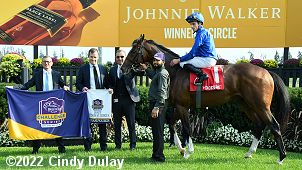 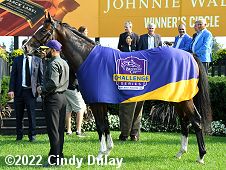 Left: Mysterious Night in the winner's circle. Alex Merriam, assistant to winning trainer Charlie Appleby said, "We were keen to get a bit of cover on him, so it worked well that [Ninetyfour Expos] went forward and he slotted in nicely. He got a nice trip around and he was getting him settled, getting to switch off and travel around nicely. He's a lovely horse." 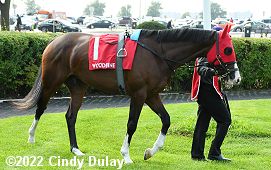 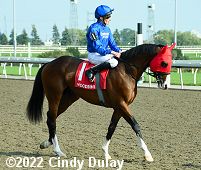 Left: Mysterious Night in the paddock before the race. Winning jockey William Buick said, "He rode beautiful and the track is in great condition. I walked it before, and you know, it's as good as it always is. We knew the horse was going to like it, fast ground. He travelled through the race beautifully. He was giving me plenty of confidence throughout the race and he was happy travelling away, so it was perfect for him and hopefully he can go on from here." 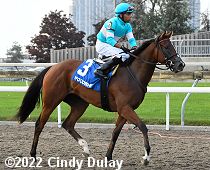 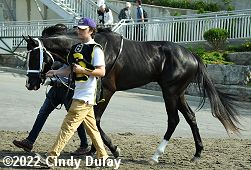 Right: Third place finisher Philip My Dear walks over before the race. The Kevin Attard trainee improved his record to 2 wins and 1 third in 3 starts, earning $178,025 for owner Raroma Stable.


Immediately after the Woodbine Mile, a field of 8 two-year-old fillies contested the $500,000 Johnnie Walker Natalma Stakes (G1), with the winner earning a berth in the Breeders' Cup Juvenile Fillies Turf. Catch a Glimpse Stakes winnerCairo Consort was sent off as the 8-5 favorite. In to challenge her included 3-1 second choice G Laurie off her 6 length debut win at Colonial Downs, and 11-2 third choice Wickenheiser, fifth in the Catch a Glimpse. 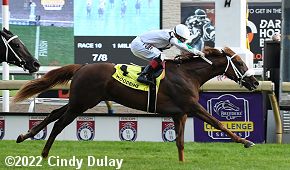 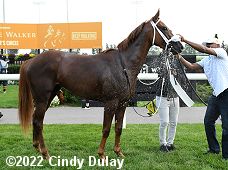 Left: Last Call in the winner's circle. Winning trainer Kevin Attard said, "Yeah, obviously that's very exciting. A filly like her should get better with a little more time and a little more distance. It's something we're obviously going to have to discuss with the ownership group but I'm sure if all goes well, she's earned her way there, so hopefully we have a date in Keeneland."

Right: Last Call gets hosed off after the race. Attard added, "We put the blinkers on early because she just wasn't showing a whole lot in the beginning and then the lightbulb kind of kicked in and she just started working more impressive each time. And we were obviously a little disappointed in her last start, but we thought she was a little rank, she wouldn't relax and settle so we've taken the blinkers off. I think just now with a couple races of experience under her belt and obviously her pedigree leans to more distance she put it all together today." 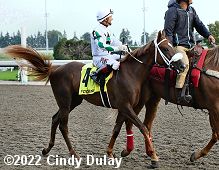 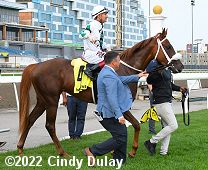 Left: Last Call in the post parade. Winning jockey Rafael Hernandez said, "The first time I rode her she was just green so we put on the blinkers (for her first 2 starts). Kevin and I worked on taking her back and relax, stay out of trouble, and come down the lane, and she showed up today. Kevin and I have some expectations for her." 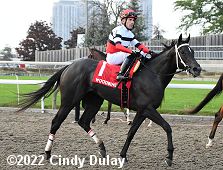 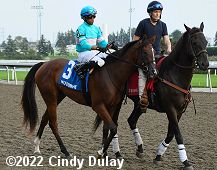