In the HK$25 million (US$3.2 million) Longines Hong Kong Mile (G1), the world's richest turf mile race, a field of 10 older horses went to post for the 1600 meter (about 1 mile) trip around one turn of the Sha Tin turf. Two-time winner Beauty Generation was sent off as the 9-5 favorite off his 3rd place finish in the Jockey Club Mile (G2) the main local prep for this race. In to challenge him included 2-1 second choice Indy Champ, winner of the Mile Championship (G1) and Yasuda Kinen (G1), and 3-1 third choice Waikuku, winner of the Jockey Club Mile.

Jockey Karis Teetan sent 7-1 fourth choice Ka Ying Star to the lead exiting the chute and he set fractions of 25.13 and 48.00 while pressed by Beauty Generation and stalked by 129-1 Zaaki and 98-1 Simply Brilliant. On the far turn Beauty Generation gained the front through 3/4 in 1:10.79. 26-1 Admire Mars, 5th early under Christophe Soumillon, came out for room and closed with a rush, outfinishing deep closing Waikuku to win by 1/2 a length in 1:33.25. It was another 1 1/4 lengths back to Beauty Generation third. 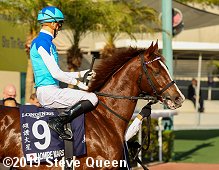 Left: Admire Mars in the winner's circle. Winning trainer Yasuo Tonomichi said, "I did think this was going to be a difficult race for a three-year-old to win, but when I saw how he had settled here earlier this week, I thought that he looked really well. Christophe Soumillon had asked to ride the horse, and he gave him a very good ride. We were all going to wear the same suit and tie together (in the owner's colors), so it still feels as if Mr. (late owner Riichi) Kondo is with us watching the race. He was a big supporter for me for a long time, he had many good horses, and he was a very good person."

Right: Admire Mars heads out to the track before the race. 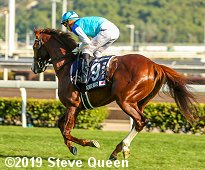 Left: Admire Mars warms up before the race. Winning jockey Christophe Soumillon said, "I knew my horse was very strong, although his last run wasn't that good," he said. "He was the best two-year-old last year in Japan, probably the best three-year-old in Japan too. I knew he could stay that distance quite well, he has good gate speed, he liked the ground, so I was quite happy. I told the lad before the race when I saw the odds on the screen ‘there's something wrong there because for me he should be in the first four favourites'. I rode my race as if he was the favourite and it paid off." 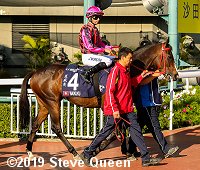 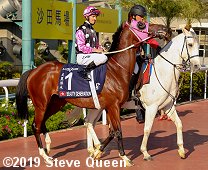 Left: Second place finisher Waikuku heads out to the track before the race. Jockey Joao Moreira said, "Extremely good run, he had to face a tough gate and I had to drag him back. He wasn't having much luck from there but it was a good second to a good horse. We didn't have too much luck from the gate and I think that is what has got him beaten. That's the reason why I pulled him back otherwise I was going to get tracked wide."

Right: Third place finisher and beaten favorite Beauty Generation heads out to the track before the race. Trainer John Moore said, "He was gallant in defeat, In his last two runs he hasn't been hitting the line as we'd expect. That's what Zac said and he confirmed that. He's just not going through the gears when he gets into the straight and he did it again today. The Stewards' Cup will be his next Group 1 race and we'll take it race by race from there.” Jockey Zac Purton said, "Disappointing mate. He's just not finishing off in the straight."