The Longines Hong Kong International Races are the richest horse races run in Hong Kong, and is the last major race day for Thoroughbred flat racing anywhere in the world. Billed as the "Turf World Championships", four Group 1 races were contested on Sunday afternoon over the right-handed 1 3/16 mile turf oval at Sha Tin Racecourse. Conditions were ideal for racing, with sunny skies, a daytime high of 20 C (68 F), and the turf going good. Attendance was well down at just 27,965 mostly due to the ongoing protests in Hong Kong. Hong Kong Jockey Club CEO said Winfried Engelbrecht-Bresges said, "We deliberately were not pushing our attendance. We wanted to be absolutely sure that everybody who came to the races would be able to go home safely because we knew there was a big demonstration on the island and we didn't want to take a risk. We had a lot of in-depth planning for this meeting. For us to be able to stage this international event when all other major sporting events here have been cancelled, we have demonstrated that we manage what we do extremely professionally, with a real risk assessment. Thanks firstly to our outstanding people here in Hong Kong and second of all the international connections who have put their trust in us and have brought some of the best horses in the world to compete and put on a race meeting of real excellence. I thank the media for trusting us and coming here, and our colleagues and the media here in Hong Kong who have covered the race meeting exceptionally well."

He added, "The outcome of today's races shows that it was a fantastic international race meeting. Our Irish friends missed out on a little bit of luck in the Cup but really it was a day for our Japanese friends. They have supported us with a lot of horses coming for this meeting. The quality and the excitement we have seen shows what Hong Kong racing is all about. It's about world class sport and that is what makes us a unique value proposition." Turnover was a record for the meeting at HK$1.71 billion (US$218 million). He added, "But today was not about the turnover, it was about the sport and also how it showed the resilience of Hong Kong racing, and the excellence of the Hong Kong Jockey Club. It is a day to celebrate because despite a lot of challenges we have staged something that I don't think many organisations in the world could have done."

In the main event, a field of 8 older horses contested the HK$28 million (US$3.6 million) Longines Hong Kong Cup (G1) at 2000 meters (about 1 1/4 miles) on the turf. Rise High was sent off as the 2-1 favorite off his 4th place finish in the Jockey Club Cup (G2), the main local prep for this event, after winning the Sha Tin Trophy (G2). In to challenge him included 9-4 second choice Furore, 2nd in the Jockey Club Cup but winless since the Hong Kong Derby in March, and 9-2 third choice Win Bright, winner of the Queen Elizabeth II Cup (G1) here in April but 8th in the Tenno Sho Autumn (G1) last out.

Jockey Karis Teetan sent 38-1 Time Warp to the lead first time by and he set fractions of 26.04, 50.02, and 1:14.00 while pressed by 9-1 Glorious Forever and stalked by Magic Wand and Win Bright. Turning for home, Time Warp continued to lead but tired badly. Win Bright, 3rd early under Masami Matsuoka, took over inside the 1/16 pole and outfinished late-running Magic Wand to his inside to win by a head in 2:00.52. It was another 1/2 length back to favorite Rise High third. 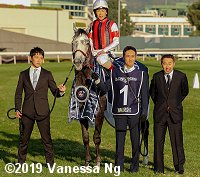 Left: Win Bright in the winner's circle after the Hong Kong Cup. Winning trainer Yoshihiro Hatakeyama said, ""His last two runs were below what I expected but he began to improve straight after the Tenno Sho Autumn and we always wanted to come here if we got the invite. He was in really good shape by the time he left Japan and that is why we were able to follow the same routine here as when we came in April. Tactically the race went exactly to plan. We wanted to sit handy. At the first bend he tried to tuck in and perhaps put a little pressure to the others. He came home really well in the straight. When I started training I used to dream all the time about sending my horses to the big overseas Group 1 races and I have been waiting for days like this ever since I got my training licence 20 years ago." 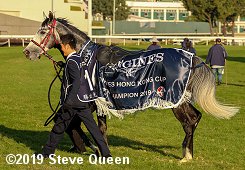 Left: Win Bright heads back to the barn. Winning jockey Masami Matsuoka said, "This is great because his last two starts have not been satisfactory. The horse has been improving all week since he got here. We had a memorable day in April and it is special to come back. It went the way we were expecting. I thought the pace would be slow so I sat about third or fourth. We perhaps made our move maybe a bit early as we were carrying plenty of speed into the straight. I was really happy the way it went. It's a great honour to be representing Japan." 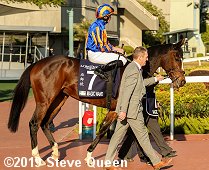 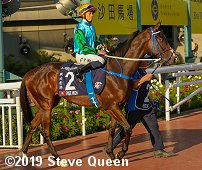 Right: Third place finisher and beaten favorite Rise High enters the track for the post parade. Jockey Vincent Ho said, "He acquitted himself really well. He was a bit held up in the early part of the straight and that didn't help. It was a bit tight at that point and he finished off OK. He ran on well and I was pleased with his run." Trainer Caspar Fownes added, "He had a perfect position and travelled very nicely but Win Bright and Magic Wand were too good for him today. It was a good run and I think he will come back stronger."

24 of the jockeys for the International Races pose as a group during the opening ceremonies.