The shortest of the International Races at Sha Tin is the HK$20 million (US$2.6 million) Longines Hong Kong Sprint (G1) at 1200 meters, the richest 6 furlong turf sprint in the world, and the final leg of the Global Sprint Challenge. After 2 scratches, a field of 12 went to post with Aethero sent off as the 1-2 favorite off his win in the Jockey Club Sprint (G2), the main local prep for this event. In to challenge him included 4-1 second choice Hot King Prawn, 2nd in the Jockey Club Sprint, and 11-2 third choice Beat the Clock, 3rd in the Jockey Club Sprint after winning the Chairman's Sprint Prize (G1).

Jockey Zac Purton sent favorite Aethero to the front through fractions of 23.71 and 45.57 while pressed by 23-1 Mr Stunning and stalked by Hot King Prawn. Turning for home, Beat the Clock, 6th early under Joao Moreira, came out for room and rallied to get up by a neck in 1:08.12. It was another neck back to pacesetting favorite Aethero third. 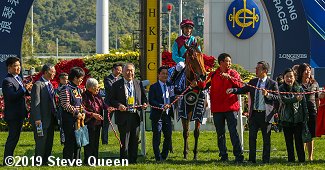 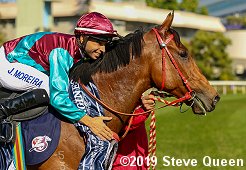 Left: Beat the Clock in the winner's circle. Winning trainer John Size said, "This was one of his best performances today, if not his best, and he will feel it. They're only flesh and blood no matter how good their character. It's very humbling to watch a horse like that. It's an amazing feeling. It's actually not much to do with me in the last 50 or 100 yards. We just keep them out of harm's way and get them to the races to do their best so it's an unusual feeling and hard to describe; someone who's more of an orator than me might be able to tell you. It's just natural to be emotional when a horse does something like this space. It humbles you, that is the best word I can think of. It means plenty to win here. It's always meaningful to perform well at international level in front of your home crowd. From the first day he trialled, he showed us he was a bit different and when he hit the track the sectional times he reeled off at the end of a sprint race showed his Group 1 potential and he's delivered, he's got the character and the mindset for it,"

Right: Winning jockey Joao Moreira pats Beat the Clock as they head to the winner's circle. 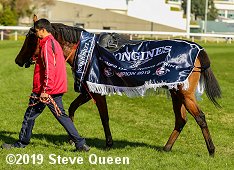 Left: Beat the Clock heads back to the barn with his winner's blanket. Winning jockey Joao Moreira said, "He is such a good horse, so consistent, he tries his best always and being his rider is just unforgettable. I've been associated with this horse for quite some time. Some people were doubting how good he was and rating him second to other horses in the race. He went there to prove today he's the best sprinter in Hong Kong. And the best part of it is I don't think that's it, I think there's more to come from him. When the gates opened he was not where I wanted him to be but I knew I was coming to win a furlong out. This was really memorable for me as some people were doubting how good he was but he showed them today and in fact I think there may be some more to come." 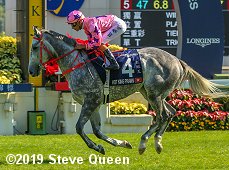 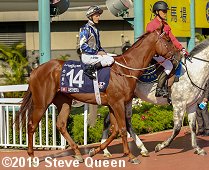 Left: Second place finisher Hot King Prawn warms up before the race. Jockey Karis Teetan said, "He ran very good, he did everything right I just thought a better horse beat us."

Right: Third place finisher and beaten favorite Aethero heads out for the post parade. trainer John Moore said, "He's a three-year-old, only got beaten a neck, so I'm very pleased with the run. He didn't win but was gallant in defeat. Zac (Purton) said that when he went for him at the 200 (metres), he was expecting something there – that they could kick away a bit but it wasn't there. He changed legs and that was the difference. He's definitely still an exciting horse."