At Happy Valley Racecourse in Hong Kong on Wednesday night, Hong Kong-based, Mauritian-born rider Karis Teetan won this year's edition of the Longines International Jockeys' Championship, with his 1 win and 2 thirds and 20 total points in the 4 race competition, taking home the winner's share of the HK$800,000 (US$102,190) purse, giving his first win in the competition. Jockeys were awarded 12 points for a win, 6 points for second, and 4 for third, and competed in four handicap races around the tight right-handed 7 furlong triangular turf course on Hong Kong Island. UK representative Ryan Moore finished second with 18 points, followed by a tie for third between local rider Vincent Ho and Irish representative Colin Keene with 12 points each. They had 1 win each but Ho had a 4th place finish while Keene's next best was a 7th therefore Ho won the "tiebreaker" and ranked third overall.

In the first leg, a 1000m (5 furlong) one-turn sprint, Ryan Moore pressed the pace with 4-1 Flying Genius then rallied to win by 1 1/2 lengths over Yuga Kawada aboard 11-2 Happy Good Guys. It was another 1/4 length back to Karis Teetan and 5-2 favorite G Unit third. The next two legs were two-turn events over 1650m (about a mile). In the second leg, Karis Teetan scored his only win on the card, rallying aboard 3-1 second choice Dream Warriors to win by a head over Joao Moreira and 11-1 Murray's Partners. It was another 1/2 length back to Zac Purton and 15-1 Thunder Stomp third, while Ryan Moore and 5-2 favorite Righteous Mate were 7th. After a one-race break, the third leg saw Colin Keene come from dead last to get up by 1/2 a length abord 15-2 Flying Quest over 5-1 Magnificent and Ryan Moore. It was another 3/4 length back to Oisin Murphy aboard 3-1 favorite Charizard. The fourth leg was an 1800m (1 1/8 mile) contest, with Vincent Ho aboard 7-2 second choice Glorious Dragon rallying from 8th to win by a head over Silvestre de Sousa aboard 26-1 The Hulk. It was another 2 1/4 lengths back to Karis Teetan aboard 3-2 favorite High Rev, earning him the trophy.

Moore said after winning the first leg, "(Flying Genius) did it nicely. He's an unexposed horse, he had a nice run around, a good mind and he's a pleasure to ride." Teetan said after winning the second leg, "I know the horse (Dream Warriors) and I just needed to get a clean jump on him. Mr. (trainer Tony) Cruz asked me to have nothing in my hands and just let him switch off like he's done before and then let down in the straight. He did this and I'm really happy with this win." After winning the third leg aboard Glory Star, Keene said, "They went good and hard early doors and he really got into his stride as we turned in and he hit the line very well. It's nice to come out here and get a winner on a night like this. I'm delighted."

After nailing down his first International Jockeys' Championship and his HK$500,000 (US$63,870) check, Teetan said, "I still can't believe I've won this challenge. I knew I had some decent rides but you still need the horses to perform. I was telling my fiancée (Xaviere Cottereau) that I was really feeling the pressure. It's just not a normal day up against the world's best jockeys. I really wanted to do well and I'm glad everything went well. It's amazing riding against the world's top jockeys like Frankie Dettori and Ryan Moore. Normally I have to watch them on television. We ride here every week but it's a different kind of racing when you're out there against so many good jockeys."

Unlike the past several years, there was no American representative in the competition. Despite winning the second leg, Karis Teetan was also fined HK$10,000 (US$1,280) for excessive use of the whip aboard Dream Warrior in the stretch. 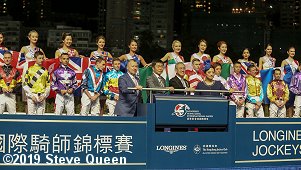 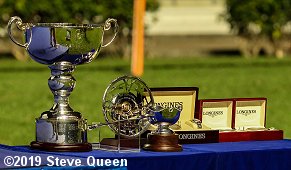 Right: The trophies for the Jockey Championship.