In the HK$25 million (US$3.2 million) Longines Hong Kong Mile (G1), the world's richest turf mile race, a full field of 14 older horses went to post for the 1600 meter (about 1 mile) trip around one turn of the Sha Tin turf. Defending champion Beauty Generation was sent off as the prohibitive 1-2 favorite off a 4 race win streak including the Champions Mile (G1) and Jockey Club Mile (G2). In to challenge him included 7-1 second choice Persian Knight, second in the Mile Championship (G1) at Kyoto, and 9-1 third choice Mozu Ascot, winner of the Yasuda Kinen (G1) but 13th in the Mile Championship (G1).

166-1 longest shot Comin' Through was quickest out of the chute through an opening quarter of 24.54 before jockey Zac Purton moved favorite Beauty Generation to lead through a half in 46.97 and 3/4 in 1:10.64. In the stretch, Beauty Generation opened up a 2 length lead. 57-1 Vivlos, 9th early under William Buick put in a futile rally on the outside as Beauty Generation cruised to a 3 length win in 1:33.52. It was another 1/4 length back to 39-1 Southern Legend third. 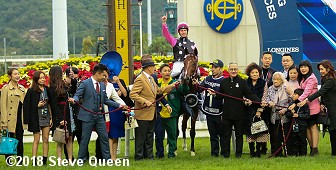 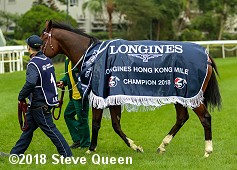 Left: Beauty Generation in the winner's circle. Winning trainer John Moore said, "That's the most impressive by far. What he did today, he was taken on inside, he had to do it the hard way as far as I was concerned. Once he got to the front he has high RPMs, he got him up and away he went. As far as I could see he wasn't even hit."

Right: Beauty Generation heads back to the barn with his winner's blanket. Winning jockey Zac Purton said, "Obviously he had a little bit of a setback and had the feet issues going into his last run, when he ran off the track. You never want those things going into a Grand Final or a Group 1 race so they do play on your mind a little bit. But I worked him late this week and he felt good in his work. John Moore asked me to come in yesterday morning to give him a canter on the big track. When I got off him I felt pretty relaxed and I slept pretty well last night." 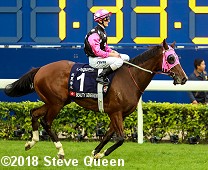 Left: Beauty Generation returns to the winner's circle. Purton added, "His best attribute is he has got a very high cruising speed, he's very comfortable rolling along at that speed and he can kick off it. For the horses back in the field they're already struggling to go the pace and when you've got to try and reel him in, it's not an easy thing to do."

Right: All the connections and officials pose with the trophy and winner's banner after the trophy presentation for the Hong Kong Mile. Moore added, "The owner (Patrick Kwok) and his father are of the opinion that they don't come back the same horse when they travel but I'm trying to convince them that that's not the case with the way that I travel my horses. There's a few little tricks there to make sure. If we're going to prove him we're going to have to do it on the world stage: We've done it here; home ground; that's the advantage; he's done it easily. I'd love to travel him, to take him to Dubai where everyone says right, here's the top three in the world. I've won the Shaheen and had a few placings over there. I know the venue very well and I believe he could travel. If everything goes to plan he could win there." 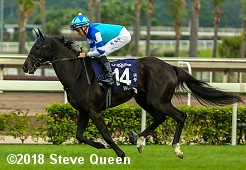 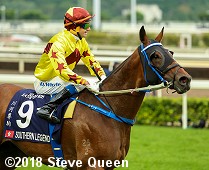 Left: Second place finisher Vivlos warms up before the race. Trainer Yasuo Tomomichi said, "She had a good position and at the far turn I thought she might have a chance to win it but the winner proved to be far too good. She really tried her best." Jockey William Buick added, "Mr. Tomomichi had her in great shape. She ran a really good race and was comfortable through the run, but was beaten by one of the best of the best milers in the world."

Right: Third place finisher Southern Legend in the post parade. Jockey Douglas Whyte said, "It was another great run and a fantastic effort. We decided to ride him positively, close to the pace. I think with a trouble-free trip he might have been second. The winner is clearly a freak."