At Happy Valley Racecourse in Hong Kong on Wednesday night, British-based but Brazilian-born rider Silvestre de Sousa won this year's edition of the Longines International Jockeys' Championship, with his 2 wins and 34 total points in the 4 race competition, taking home the winner's share of the HK$800,000 (US$102,390) purse, giving his first win in the competition before the 30,174 fans in attendance. Jockeys were awarded 12 points for a win, 6 points for second, and 4 for third, and competed in four races, three carded at 1650 meters (just over a mile) and one (the first leg) at 1000 meters (about 5 furlongs) around the tight right-handed 7 furlong triangular turf course on Hong Kong Island. Ireland's Colin Keane finished second with 16 points, followed by a tie for third between local rider Vincent Ho and American representative Javier Castellano with 12 points each, however since Ho had 1 win while Castellano had none (he finished 2nd in 2 legs) Ho wins the "tiebreaker" and collected the third place check.

In the first leg, Colin Keane aboard 7-2 favorite Special Stars rallied from off the pace to win the 1000 meter (5 furlong) event by 1 1/4 lengths over Silvestre de Sousa aboard 21-1 Midnight Rattler. It was another 1 1/4 lengths back to local rider Karis Teetan aboard 10-1 Godspeed third. The remaining 3 legs were all at 1650 metres (about 1 mile). In the second leg, Silvestre de Sousa went gate-to-wire aboard 5-1 Glory Star, defeating Javier Castellano aboard 17-1 Good for You by 1 1/2 lengths, with Colin Keane riding 12-1 C Power another 3 lengths back in third. In the third leg, Javier Castellano tried to wire the field aboard 12-1 Curling Luxury, but Vincent Ho, 6th early aboard 20-1 Little Island, rallied to get up by a head. It was just a nose back to 5-2 favorite All You Know and Silvestre de Sousa, completing the 3 horse win photo. Going into the final, de Sousa led the pack with 22 points, Keane with 16, and Ho and Castellano tied eith 12 each. In the final leg, De Sousa aboard 20-1 Experto Crede stalked the pace then took over in the lane to win by a length over 4-1 favorite Bank On Red and jockey Ryan Moore to clinch the title. It was another 1/4 length back to 29-1 Sumstreetsumwhere third with local Matthew Poon in the irons.

Keane said after winning the first leg, "(Special Stars) did it well. He was a little green early, but picked up well when I asked him, and he's a nice little horse." After winning the second leg aboard Glory Star, de Sousa said, "The horse is in great form, so I wanted to be positive. I let him have a breather at the 1000 meter mark and then got him going again. He did it well." Vincent Ho said after his third leg win aboard Little Island, "It's great to win here, and to be in this field. He travelled well – I got a little bit squeezed – but then he gave me a good kick. I've a chance in the last and I'll be doing my best."

After nailing down his first International Jockeys' Championship and his HK$500,000 (US$64,000) check, de Sousa said, "I have to pinch myself that it all went so smoothly tonight, you can't buy moments like this. The atmosphere was amazing, and you could hear the crowd cheering behind you. Obviously you need luck on a night like this, but to beat jockeys of the quality in this field is something really special."

Javier Castellano, the only American representative, finished in a tie for 3rd. Due to an interference incident inside the 1/8 pole during the 3rd leg when Curling Luxury bore out, Castellano received a 4 day suspension for careless riding to be served from December 26-29. Japan's Yutaka Take received the same penalty for an interference incident at the 3/16 pole aboard Lucky Lucky in the same race. 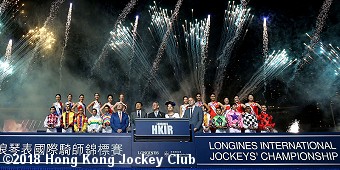