The $1 million TVG.com Haskell Stakes (G1) is New Jersey's most prestigious race, featuring some of the top East Coast 3-year-olds going 1 1/8 miles over the main track at historic Monmouth Park in Oceanport, looking for automatic entry into the Breeders' Cup Classic (G1) under the Breeders' Cup Challenge Series "Win and You're In" promotion. Conditions were tropical on the Jersey Shore, with a fast main track, sunny skies and temperatures in the mid 90's for the 22,138 fans in attendance.

Jack Christopher was sent off as the 7-10 favorite in the field of 8, undefeated in 4 starts including the Pat Day Mile (G2) and Woody Stephens Stakes (G1). In to challenge him included 2-1 second choice Taiba, winner of the Santa Anita Derby (G1) before disappointing 12th in the Kentucky Derby (G1), and 7-1 third choice White Abarrio, winner of the Florida Derby (G1) but 16th in the Kentucky Derby and second in the Ohio Derby (G3).

Jockey Angel Martinez sent 56-1 Benevengo to the front first time by and he set fractions of 23.50, 46.96, and 1:09.93 while pressed by Jack Christopher and stalked by 15-1 Howling Time and Taiba. Turning for home, Benevengo tired allowing Jack Christopher to inherit the lead through 1 mile in 1:34.25. 15-2 fourth choice Cyberknife, 6th early under Florent Geroux, came through on the rail to challenge. Cyberknife outfinished Taiba to win by a head in a new track record 1:46.24, 0.26 seconds faster than the previous record set by Highly Motivated in the Monmouth Cup earlier in the card. It was another 2 lengths back to favorite Jack Christopher third. 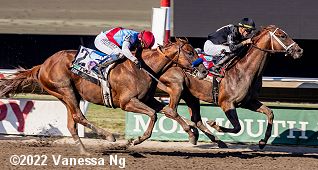 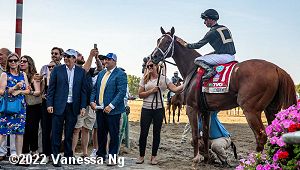 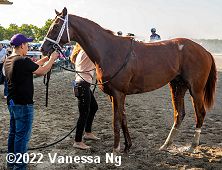 Left: Cyberknife in the winner's circle. Winning owner Al Gold said, "This is a very big victory, especially to win this race right in my old back yard. The Arkansas Derby was very big, and the Haskell is as well. It's a very big deal. I started betting horses when I was a kid and have owned horses for 40 years. You always have fantasies. You want to win the Kentucky Derby and all the big races, but this is one of the ones I really wanted to win. And we're on our way to the Breeders' Cup now."

Right: Cyberknife gets hosed off after the race. Winning trainer Brad Cox said, "Throughout the race I thought he looked very professional with the way he handled himself. At the quarter-pole, Florent had a nice hold of him and he was loaded. He responded well when asked. He flew at the end. I am very proud of him. He was able to settle. Florent took a good hold of him and then made a run up the backside and got him in position along the rail. Then Florent turned for home and he looked like he had a lot of horse." 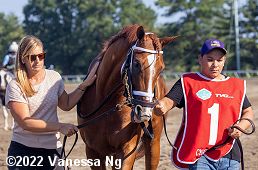 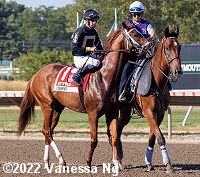 Left: Cyberknife walks over before the race. Winning jockey Florent Geroux said, "By the backside you could tell that some of those other horses they were already (out of the race). I pushed the gas a little bit like I did in the Arkansas Derby just to get into him. He responded instantly. He has a turn of foot like a turf horse on the dirt. He can make several moves in the race. We knew that before the race. That's why I used him a little bit to take good position at the half-mile. From there I stayed quiet until it was time to go."

Right: Cyberknife in the post parade. Cox added, "He was just figuring out whether he was going inside or outside of the leader. I think at that time it was Jack Christopher. It looked like he made the right decision staying to the inside and we were able to hold off Taiba. It was a big effort. I'm very proud of this horse and our whole staff. He's been a challenging horse at times. A lot of the good ones are. He stepped up, proved he's a true Grade 1 horse." He will go next in the Travers Stakes at Saratoga. 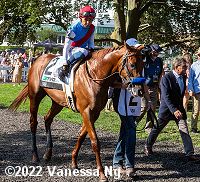 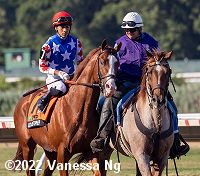 Left: Second place finisher Taiba in the paddock before the race. Jimmy Barnes, assistant to trainer Bob Baffert said, "He made a gallant effort, that's for sure. He came running. We're very proud of him. I was hoping to be one-two. It's possible his lack of seasoning might have had something to do with it a little bit. I have to talk to Mike (Smith, jockey) and see what he thinks. We'll get him home to California and see how he comes out of the race and go from there."

Right: Third place finisher and beaten favorite Jack Christopher in the post parade. Jockey Jose Ortiz said, "We had him where we always do. When I asked him, when it was time to run, he was going good, but he just got outrun. He was relaxed on the backside. He was going nicely. He wasn't pulling me."

The field shortly after the start of the Haskell. Jockey Mike Smith aboard second place finisher Taiba said, "I couldn't get him to run down inside. He completely let go of me down the backside. Once I got him out, man, he jumped back into it and I said ‘Oh good, we got them now.' I'm proud of my horse. He has room to grow."