The $1 million TVG.com Haskell Stakes (G1) is New Jersey's most prestigious race, featuring some of the top East Coast 3-year-olds going 1 1/8 miles over the main track at historic Monmouth Park in Oceanport, looking for automatic entry into the Breeders' Cup Classic (G1) under the Breeders' Cup Challenge Series "Win and You're In" promotion. Conditions were tropical on the Jersey Shore, with a fast main track, sunny skies, temperatures in the high 80's but with minimal wind and high humidity, the heat index peaked at 102 for the 20,983 fans in attendance.

A field of just 7 made final entry, with Louisiana Derby (G2) winner Hot Rod Charlie sent off as the 4-5 favorite off his 2nd place finish in the Belmont Stakes (G1) after finishing third in the Kentucky Derby (G1). In to challenge him included 3-1 second choice Mandaloun, winner of the Pegasus Stakes after finishing a close second in the Kentucky Derby (G1), and 7-2 third choice Following Sea, making his stakes debut off 2 allowance wins by open lengths. 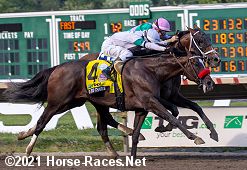 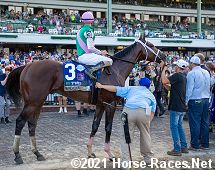 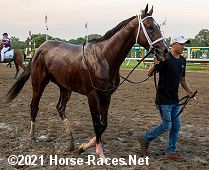 Left: Mandaloun in the winner's circle. Winning trainer Brad Cox said, "We got a really good trip. I thought it was a lot like our Kentucky Derby trip. He was saving ground. Florent did a good job of getting on the outside of Following Sea. Turning for home I thought we had a big shot at winning the race. I thought we ran a winning race. We didn't have our nose down at the wire but it worked out. I'm proud of the effort and the performance. He's always been a good colt, he has always been highly thought of. He deserves a Grade 1 victory. He's a Grade 1 horse and I'm glad it worked out today." 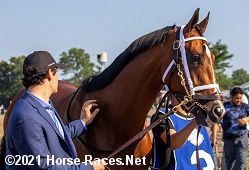 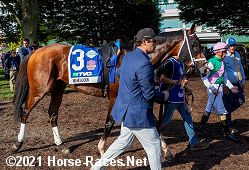 Left: Mandaloun walks over before the race. Garrett O'Rourke, racing manager for winning owner-breeder Juddmonte Farms said, "Ultimately I think Brad followed a very good plan. We got one over the track (in the Pegasus Stakes). He trained up here as well and we're sitting here today so we have to consider it a success. I know he's a genuine Grade 1 horse. There's no fluke to the way the horse runs. It's good that the horse justified how good a runner he is. He's a beautifully bred horse and he was extremely well prepared. We're extremely proud. It was an unusual race but we still feel like he ran a winning race and it tastes the same."

Right: Mandaloun in the paddock. 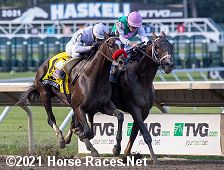 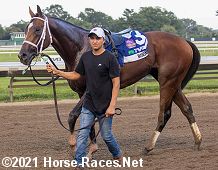 Right: Mandaloun circles while the stewards consider the inquiry. Trainer Brad Cox said, "Someone watching the race next to me said Hot Rod Charlie may come down. I was so focused watching Mandoloun I didn't see the horse go down. It looked like he clipped heels, but I was not sure what happened. I was not sure if (Midnight Bourbon) ducked in behind Hot Rod Charlie or if Hot Rod Charlie came over on him. Once I saw the head-on and the replay, I saw it. It didn't take them long to change it and it was pretty obvious they would make a change. We're going to ship Mandaloun up to Saratoga and let him catch his breath." 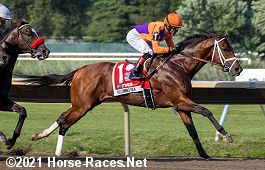 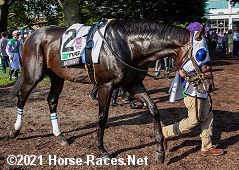 Right: Third place finisher Antigravity in the paddock before the race. He improved his record to 2 wins, 3 seconds, and 4 thirds in 13 starts, earning $240,310 for owner-trainer Jerry Hollendorfer and co-owner Dennis January. 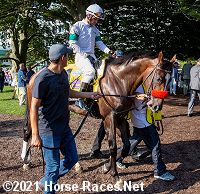 Left: First place finisher disqualified to last Hot Rod Charlie in the paddock before the race. Jockey Flavien Prat said, "I'm really proud of his effort. My horse was lugging in a little bit. The problem was I cocked his head and grabbed him, but there was little I could do. If I could just tap him left-handed (which is prohibited in New Jersey). Every racetrack has different [rules]. I respect every decision. He just clipped heels. That's it." Prat apologized to Paco Lopez for the incident and Lopez accepted, saying "It happens, man."

Right: The field shortly after the start of the Haskell. 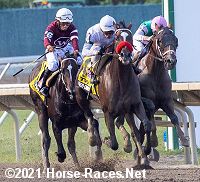 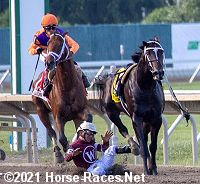 Midnight Bourbon stumbled after clipping heels, unseating jockey Paco Lopez. Lopez was treated on-site by Monmouth medical director Dr. Angelo Chinnici, and did not require a trip to the hospital. Dr. Chinnici said, "Paco has a soft tissue injury to his right knee and ankle. He was alert and oriented. He was not taken to the hospital. He took off (the rest of the card) as a precaution.." Midnight Bourbon suffered no serious injury from the incident. Lopez added, "My horse kicked me in the knee. I felt pain in my tendon there and I couldn't move my leg for 10 minutes but I'm fine now and can bend my knee again. I had my horse in the right position to win. My horse had a lot of run left so I think I could have won that race."